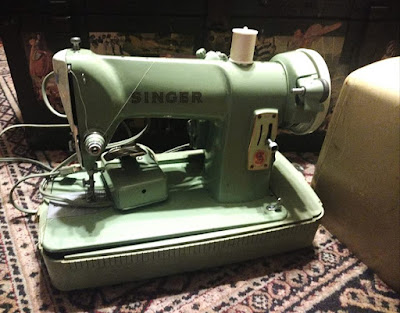 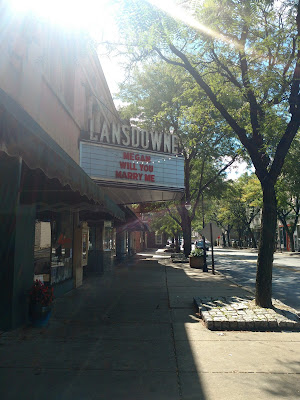 Speaking of my village, I just ran across this picture on my phone that I took last year. I don't know Megan, and I don't know the groom, but I do love knowing that I live in Bedford freaking Falls.
Posted by Karen at 3:58 PM No comments:

It took a village

As always, my back yard is a work in progress.

I'm trying to be more organized here, and I've found a way that keeps me from changing my mind every year. The front yard is flowers. All flowers, all the time. The side yard is flowers and the blueberry bushes, because the like the sun there.

The back yard is veggies, and to make me stick to that plan, I've installed eight raised beds, covered the paths with wood chip, and filled the beds with a mushroom soil/topsoil blend.

When I say I've done this, I do mostly mean I've done it. I got the raised bed kits last summer, and they spent the winter in the garage. About a month ago, I cleaned up the yard and rolled landscape fabric across the entire space, except for the back corners where I still need to get shrubs removed (I know, should have been done first, but can't anyone to do it). Then I placed the beds, and ordered the wood chips and soil to be delivered from a local place, each load a week apart.

Last week, two yards of wood chips. I borrowed a wheelbarrow from a neighbor, and it took about 2.5 hours to wheelbarrow all of it from the driveway and spread it around the yard. I was tired, but not too bad. I figured the soil would take longer, it being heavier.

I was right. Soil arrived yesterday, mid-stucco repair. The driver, deciding for himself that I hadn't ordered enough wood chips, added an extra half yard on the house, and he shoveled those out first. (I was actually fine for wood chips, but my policy is never to say no to a freebie, so...). Next he dumped two yards of soil.

The soil arrived at 11 a.m. My next door neighbors, whose half of the drive was filled with my dirt, came home around 3 p.m. and told me to sit while they shoveled for a while. The brother was strong, but a little too energetic with the wheelbarrow, so the extra wood chips will come in handy to cover where he dumped soil on the paths. They eventually went in to start dinner, and I continued shoveling until Mario got home at 6. By that point, there were about 5 barrow loads left, plus the sweeping. I sat on a raised bed and directed him, because by that point I couldn't raise my arms, my legs were shaking and my feet hurt from being on them non-stop for hours in cheap sneakers.

Just as I was heading up for my shower, I got a text from my neighbor down the street. "Saw your madness, you must need food. Clean up, be here at 7." She fed us a lovely roast chicken with Thai rice and string beans, and we brought a bottle of wine.

I was in bed by 9:30, and I can't say I've ever been happier to go to sleep while the rest of the world was still wide awake.

Today I'm mostly okay, and the parts that hurt at least tell me I was lifting properly - my hamstrings, inner things and my abs are killing me. My back and shoulders are just tired.

But now I have a clean slate, and when I can look at it without flinching, I will plant it.

In the meantime, I'm happy to know that while I can do it myself, it's nice when my village chips in to get it done.
Posted by Karen at 7:04 PM 4 comments:

If I'm being honest 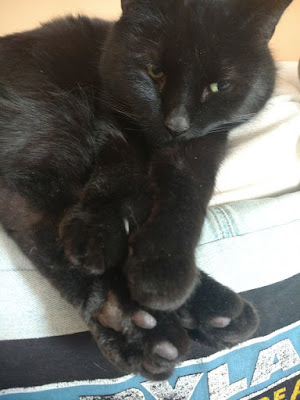 To work or not to work, that is the question.

Whether to suffer the slings and arrows of public transportation, annoying lawyers and crowds of people, or to stay home, in my happy place...

I got a call the other day from one of the offices where I've temped in the past. They're doing a bit of staff reorganization (where have I heard that before?) and need coverage during the period of disruption.

I said that I was still only willing to work three days per week, and they're fine with that, after the first week or two where they need some extra help.

I'm waiting to hear back regarding salary and hours - this preliminary call was just to confirm that I was still looking for part-time work - but now I'm reconsidering.

Do I want to go back into an office? I don't need to right now - and part of me would like to work from home, getting ready for craft show season and seeing how much I can get done on this new book.

I've never tried writing one flat-out because of interest before; it's always just been something I did because I enjoyed it. But now that the first book will be published in November, I need to think about a follow up. I'm never going to make a living exclusively from writing - the days of that happening are pretty much over unless you strike it REALLY lucky or are able to churn out a half dozen books a year.

But I also don't need much money. I figured out when I left full-time employment six years ago just how much I need to get by, and that was when I had a $1K per month mortgage. Life costs less now.

Plus, show season starts at the end of April, and my surgery is scheduled for May 1st. And somewhere in there I'll be dealing with the stucco contractor rebuilding the top portion of the chimney, and I'd really like to be around to supervise him. (Or get under his feet and annoy the crap out of him, if I'm being honest).

It's going to be something good

Back in January, I got my eyes examined. For the first time in probably five years. I hadn't noticed my prescription changing much, but I'm basically blind as a bat, so hard to tell. I've been ordering new glasses online every year with my old prescription, and they've seemed fine - I always saw better, but that could simply be that the lenses weren't scratched.

Eye doctor writes new prescription, says he'd like to have me back for a few more tests because I'm so nearsighted; there are a few things he'd like to rule out. That turns into him sending me to a retina specialist, to further rule out things, and instead having them ruled in. Basically, I'm having eye surgery on May 1st to repair something that isn't quite broken yet.

I have a small hole in my retina. Specialist says it could have been there for years - I could even have been born with it - but myopia is very stressful on certain parts of your eyes, and, like every other part of us, even the muscles and tissues surrounding our eyes stiffen up with age. Something could detach, and soon.

Doctor says it's actually very routine (though it's not HIS eye), and will only take 30-45 minutes tops. I'll go home with a patch and eyedrops, lose the patch the next day and keep up the drops for another week or so.

Truthfully I'm more freaked out about the pre-admission testing, but that's because I'm a huge needle-phobic baby who has never yet managed to get a needle without either hurling or passing out.

I know. I come off as such a hardass sometimes, but show me something with a point that isn't intended for sewing, and off I go..

I'm trying to decide what kind of reward I deserve for getting through the testing without hitting either a tech or the floor. It's going to be something good.
Posted by Karen at 12:24 PM 4 comments: