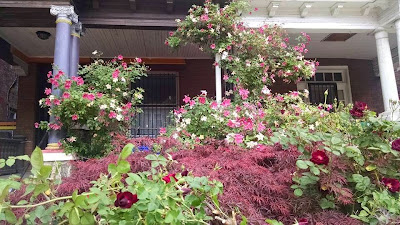 After this past winter, it's almost unbelievable that it's finally spring.

And in true Philadelphia fashion, it's spring by way of mid-August.  I did an outdoor show on Saturday and it was almost 90, muggy and humid and sticky.  And lovely, after the excesses of February.  I'll take sticky any day of the week; it's a lot less expensive to get through comfortably, and I'm really, really tired of wool.

When I bought my house 15 years ago, I put a few rose bushes in the front yard.  Not because I particularly wanted them at that point, but I unexpectedly had a patch of dirt out there and I knew that I couldn't kill roses, especially those waxy ones that are sold in plastic bags at places like Aldi.  My mom had a black thumb with outdoor plants, but even she never killed rose bushes.  (On the other hand, she grew a mean African violet, and I kill every house plant I've ever met).

So I planted roses, and they did okay.  And then I got into them, and started buying more expensive, unusual ones.  Own root roses, as opposed to the grafted ones, which means they came in little 6" pots, grown from cuttings.  More fragile when young, but sturdier when older because they've grown on their own rootstock instead of being grafted.

The red roses on the front fence are grafted "bag" roses, and they've almost been completely overtaken by the original dark red rootstock rose, which is pretty, but only blooms once a year.  I haven't decided what I'm going to do about those, because at least right now, they look good.

The multicolor roses in the back, climbing the porch, are a variety called Mutabilis, which I was told wasn't hardy in this zone, at least not as an own root rose.  I bought 2 of them because I liked them, and because if they didn't survive, I'd get to try something new the next year.

Gardening makes you cold-blooded sometimes -- grow, or don't grow.  If you fail, I'll plant something more interesting next time.  I have only so much ground, and there are so many plants.

Perversely, because I didn't care if they made it, these roses thrive.  Every winter they look awful.  Some years, when the snow is heavy, they fall flat on their faces in the yard.  This year, they stayed upright but there was about 3' of dead wood on them.  I was really afraid I was going to lose the section at the porch center, but other than cutting out some dead, it came through really well.  Go figure.

On the ground: about 5 years ago, I put in 6 lily of the valley shoots.  For the first few years, they grew and bloomed, and about 2 years ago, they started to slowly spread.  This year, they're halfway to the fence.  You can smell them down the street.

Now back to sewing.  And scratching.  I spent a half hour pulling sticky weed out of the front yard (you can see a little of it in the far right of the lily of the valley photo).  Generally I'm impervious to things that make everyone else itch, but that stuff breaks me out in a rash unless I get inside and wash up right away.  Which I did, but I'm still a little itchy.  Sewing will provide a distraction until the itch goes away.

Sitting on your porch in the early evening, surrounded by the fragrance of roses and lilies of the valley must be pure bliss. You are a lucky, lucky woman.

Sitting on your porch in the early evening, surrounded by the fragrance of roses and lilies of the valley must be pure bliss. You are a lucky, lucky woman.