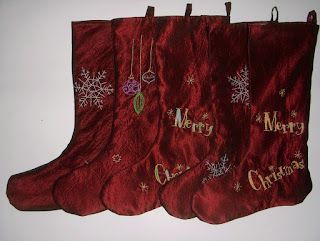 I'm feeling a bit better about the upcoming craft show madness. First of all, because during my four-day weekend I did manage to get a lot of stuff done, and I also dragged out what was left from last year and some things I made during the year for that purpose (and which I forgot about) and discovered that my inventory was not as dire as I thought.

I've got about 45 pieces so far, in categories as random as baby clothes, handbags, scarves, potholders, embroidered pillow covers and Christmas stockings, all from recycled/upcycled fabrics.  I'd like to get that number up to 60, but we'll see.  I'd also like to eat, sleep and have a social life.  And I guess I have to go to work, though I'd really rather stab myself repeatedly with straight pins. 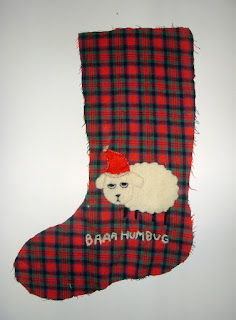 The second show I signed up for is only a one day event, shoehorned into a neighborhood library's book-and-cake sale and wreath-making workshop. I'll have a table at that, and aside from promoting the OTHER craft show, which starts the night before, I'll be trying to sell more Christmas-specific items. I figure with wreath-making, I'll be getting the elves, not the humbugs like me. So I made stockings all weekend.

Embroidered ones out of a crinkled dark red taffeta evening skirt, combined with the leftover satin and velvet from my friend's theatrical costume, plaid flannel ones ornamented with felted wool sheep that say "baaa humbug."   And now, I found some moss green crushed velvet, which I'm going to combine with some remnants from a Burda blouse project in moss green, black and gold stripes. 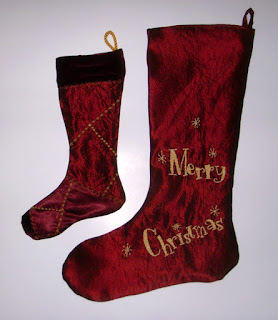 They come in two sizes, classic (to be hung by the fire with care) and gift bag size. Lined with muslin. They're going together quickly and I'm hopeful that they'll appeal.

So I'm still a bit stressed (it is the holidays, after all), but since most of it is of my own making, I'm okay. I'm always better with self-inflicted stress than stress from outside.
Posted by Karen at 11:10 PM 5 comments:

Ceil Chapman: Something to Drool About 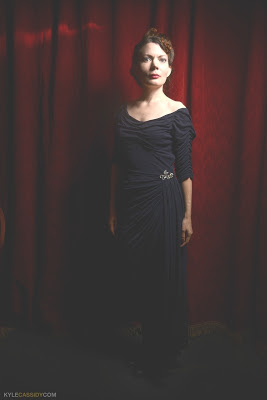 Someone gave me this dress a few months back, knowing I've been selling a lot of vintage on Etsy.  She said she bought it years ago and felt that she paid too much at the time, because there's some damage to the dress, but she thought it was worth if it she could take it apart and make a pattern from it.

When I saw the Ceil Chapman label inside, I was so glad that she realized her skills weren't up to the task.  It  remained in a bag in her closet for probably 15 years before she gave it to me.

I lent it to another friend recently for a photo shoot.  I needed photos of the dress on someone, anyway, if I intend to sell it, and she's certainly more photogenic (and more suited to this dress) than I am.  She's in a play and the 1940s-era costumes aren't complete yet, so she needed a glam dress for the promo photos.

Glam is something this dress definitely is.

And can I tell you, I would have absolutely no idea how to take this apart and make a pattern from it either.  The very idea makes me weak in the knees.

The damage, I think, is moth - the dress is a light wool crepe, and I'm sure over all the years of its existence it has tempted more than one moth to take a bite.  All things considered, the damage isn't bad, except for the location - right smack on the front.

It figures, doesn't it?

But look at that drapery.  Look at that neckline, front and back.  If this dress doesn't make you feel like you're queen of the world, you just don't have it in you.

I've tried this dress on and even though I'm about 4 inches shorter and 25 pounds heavier than my friend here, I felt like the freaking queen of the world in it too. 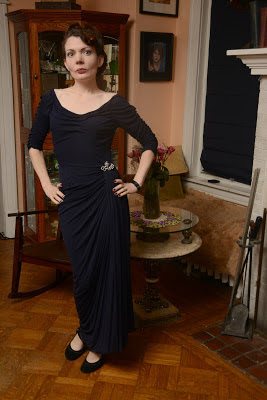 I know that even in it's time, this was an expensive, dress-up piece.  But why don't people (other than celebrities) have occasions to wear things like this anymore?  Why is our version of dress-up, at most, an LBD that we can dress up or down?  Would the owner of this dress have even considered "dressing down?"

Rant over.  Look at the pretty.  Once I get it back so I can do a few more detail photos, including the label, it's going up on Etsy.  I just wanted to share it with you all because there aren't many people out there who (a) know who Ceil Chapman is; (b) can appreciate this kind of fabulousness; or (c) would try to wrap your heads around how to make something like this.

Life is calming down, sort of.  Took some time this weekend to have coffee with friends, went to see Lincoln last night (fabulous), and today I'm doing some craft show sewing and (obviously) some non-productive playing on the computer.
Posted by Karen at 3:04 PM 12 comments:

How - or better yet, why - did I commit myself to a second craft show that starts the day after the first one, when I don't at this point have enough inventory completed for the first show?

Talk about boxing yourself into a corner to get things done.  I'm going to hear the machine in my sleep.  I can only hope it's the elves, sewing away.
Posted by Karen at 8:00 PM 3 comments: 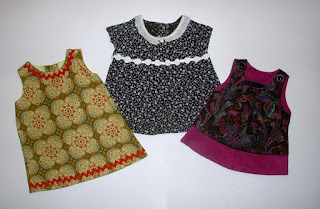 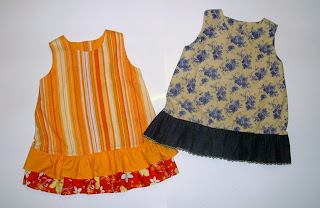