Who seems to think that she has a messy sewing space.

Problem here is, I'm a natural slob.  I rarely tidy between projects, and sometimes not between months.  Add to that the fact that I'm currently working on several projects that are using up remnants, scraps and recycled odds and ends of clothing, and there's just no hope.

Not sure if you can see the iron on the table, but it's there.  Of course the only ironing board within reach (and uncovered) is the sleeve board.

Yes, I am.  I am pressing my seams on a sleeve board right now.  But at least I'm still pressing.

Until the iron disappears.

If there's a cure for this 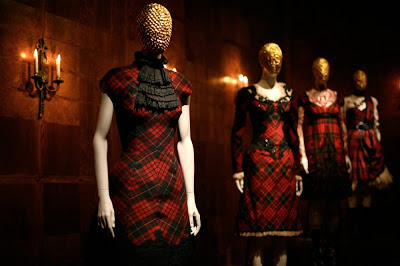 How long has it been now since the Savage Beauty show at the Met? Doesn't matter, I'm still feeling it.

Andrea and I went to that show together, and anyone who has seen the two of us together - or even Andrea alone - knows how rare it is for there to be silence. 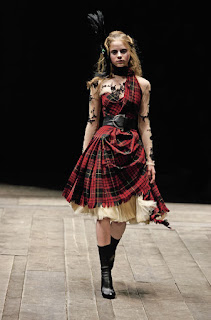 But silence there was after the McQueen show, all the way back down 5th Avenue to Penn Station, we barely talked, our minds still spinning with what we had just seen.

There were hardly any pieces in the show that didn't stop me in my tracks, but for some reason the tartans, part of his Widows of Culloden collection, really did me in.

I guess it would be more appropriate to say how could that portion of the show not have gotten to me?

Ever since then, there's been a dress percolating in the back of my mind that has elements of several of these pieces. 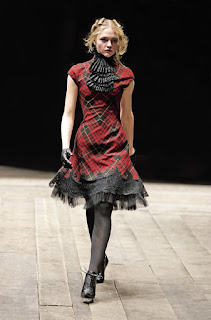 The bits I like best:  the first dress in the photo at the top, and the third here on the left - the sharp V down the front of the plaid, the lace appliqued at the hem.

The modified sweetheart necklines on several of the dresses, although I don't have it in me to even try to duplicate the gorgeous dark red beading and embroidery of the dress with the sheer sleeves below on the right and center.

For the dress with the actual tartan drape, I love the attitude, the belt and the tulle peeking out from underneath.  And the boots.  But I'm trying not to think about shoes here; I'm thinking about tartan. Or at least I'm trying to.

The next dress on the hit list here is the second sweetheart neckline, shown at the front in the very last photo. 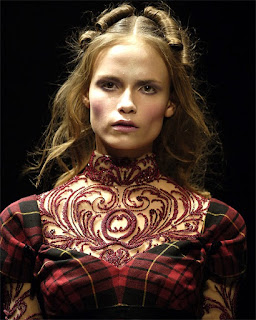 On that one I don't like the plaid as much - I prefer the sharper points down the front of the first dress - but I love the black beaded lace around the neckline and the bust and the curves of it over the hips.  I also like the discreet tulle ruffle at the neckline, wrists and hem.

It also helps that I have about 5 yards of ivory cotton tulle that I scored at Metro Textiles during last year's NY PR Weekend.  I had no idea what I was going to do with it, but it was beautiful, it was soft, and it was in the remnant bin.  I split it with Claudine, who I believe has used some if it already. 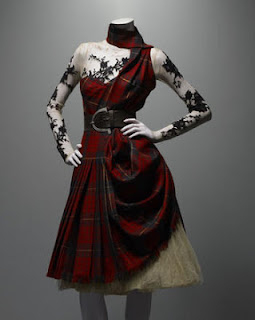 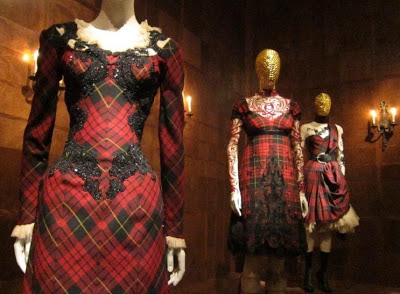 Patchwork and Ruffles and Color, Oh My 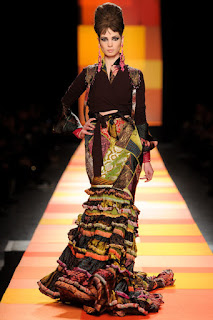 I have to say, despite my love of fashion, I'm not one to spend much time perusing the fashion sites, looking over the various designers' collections and making notes of things I want to knock off.

It's not that I don't admire the artistry, the fantasy, the complete ridiculous luxury of the couture collections; I just generally look at it as moving art, not as something I can distill down into something wearable by me in my everyday life.  Lately my sewing has been about filling gaps in my existing wardrobe, not concocting fantasy items, but this . . . now this is different.

This skirt from Jean Paul Gaultier's 2013 spring couture collection hits me in so many ways it's not even funny.

Maybe it was my early exposure to Cher (back in the Sonny-and-Cher, Gypsies-Tramps-and-Thieves days). 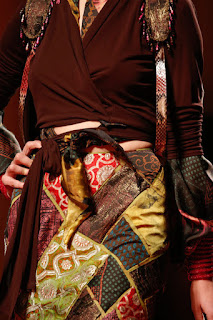 Maybe it was my mom's closet, where there was a black curly wig and loads of hoop earrings and jangly bracelets to parade around in.

Maybe it's my love of Victorian crazy patchwork, which was well formed even before I inherited a silk crazy quilt from my great grandmother, a piece so gorgeous - and fragile - that I don't often take it out of its tissue paper shroud.

But a gypsy-inspired multi-colored patchworked and embroidered wonder of an almost-flamenco skirt?

Oh, be still my beating heart!  I literally got a little bit dizzy when I saw this thing. 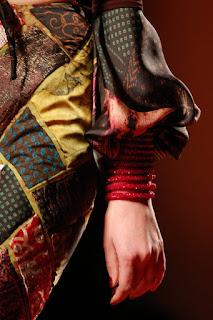 I saw one photo on the blog Plays with Needles, and it led me on a search to find the whole skirt, and in the process, the whole of Gaultier's spring 2013 collection.

Which was lovely, I have to admit, loads of eye candy for any fashion lover, but after 47 photos, this skirt was still my favorite.

And even though I'm not thinking about making anything like this right now, I have to say that this is actually a couture piece that I could see adapting into a wearable-by-me item.

Obviously it can't be floor length, and those lovely flamenco ruffles would have to be modified, but you get the idea.

And on to more mundane things, like the bad weather.  Which we did not get.  Honestly, I'm getting so tired of the snowpocalypse forecasts that I've stopped listening.  Since when is a foot of snow a national emergency?  It used to be called an excuse to go sledding. 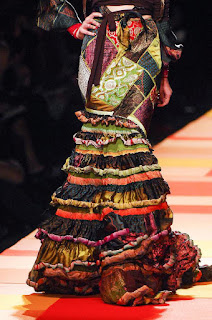 Besides which, we got about an inch, and most of that melted and turned slippery.  When I went out at 6:00 a.m. to feed the chickens, I expected to find snow.  It was cold, and there was a little crust on the back steps and the coop tarp, but other than that,  it didn't look any  different than it did on Friday.  I fed the girls, gave them some fresh water and put their coop warmer in the microwave for 5 minutes and went back to bed, assuming the worst was yet to come.

Three hours later, I got up again.  Still no snow.  It must have been worse further north, because most of the farmers didn't make it to the market today.

The worst effect of WinterSuperstormNemo on my weekend?  No kale for the soup I made this afternoon.  Oh, the humanity.
Posted by Karen at 12:08 AM 5 comments: 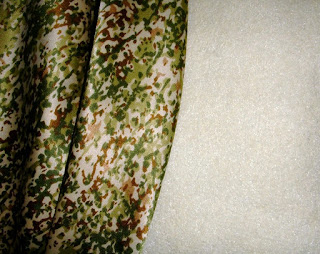 So Tuesday I took the bus up to NYC. Elizabeth was in town and we spent the day catching up, visiting the DG Expo and fondling fabrics and notions, eating, drinking and, of course, buying a little fabric. We visited Mood, but I held back (I have a gift certificate that I forgot to bring, and I'd always rather spend someone else's money than my own). I picked up a few jeans buttons at Pacific Trims and fantasized about all their ridiculous trims that I have no use for (and no clue how much to buy, since there's no specific use for it), and of course I had to visit Kashi at Metro Textiles.

Message from Kashi to all Patternreview members and sewing bloggers out there: He misses you. Business has been down since Hurricane Sandy, though he can't think of a link between his business and the weather, but he has lots of goodies and no women to buy them. Visit the man. You'll be glad you did.

I was very well behaved at Metro, despite Kashi's insidious offerings of fabrics he knew I'd like. (There are some killer silk twills right now, in a rainbow of delicious colors). I ended up with 2 yards of ivory pre-fused boiled wool and 2 yards of poly charmeuse for a lining. I actually bought an entire project in one visit - excepting trim or buttons, of course, but I can probably manage to trim and/or button about 20 jackets with what I have in stash.

Of course I could also make 20 jackets and line them with what I have in stash, but that's another story. I don't have an ivory jacket, I don't have any ivory fabric, I love working with boiled wool, I hate fusing fabrics and will always happily buy pre-fused if I'm lucky enough to find it, and while I could have lined it with something I already have (and still might, if the charmeuse decides to be something else), I couldn't resist that lovely green flecked fabric.

I'm not who I was five years ago, at least according to my  recent Amazon.com recommendations.  At least they still know I sew . . . 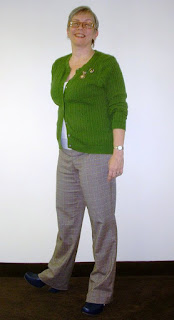 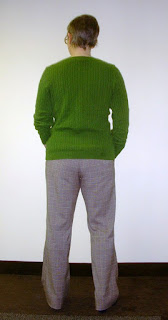 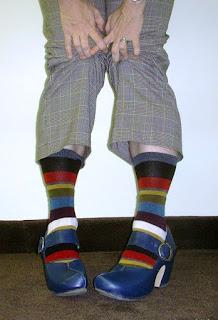