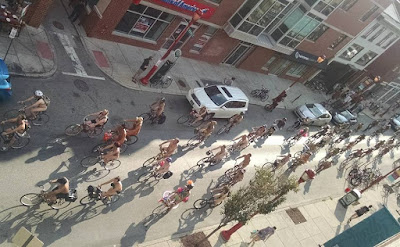 My departure from yesterday's show at the South Street Whole Foods was delayed by the arrival of the Philly Naked Bike Ride.

All the vendors hung over the edge of the parking garage, cheering them on, while all our rides waited behind (enjoying the view?) before they could get into the garage to retrieve us.

Just another day in Philadelphia.
Posted by Karen at 1:23 PM 2 comments:

Unfortunately, not a post about my new adventures in canning.  (My new baby is still resting comfortably in her box, and probably will be for a while yet).

I have almost three weeks left at my summer temp job.  It extended far beyond what I planned, but it's hard to say no to regular money being put aside against the heating bill in January, especially when I intend to be happily in the house, enjoying said heat.

But it's hard, as we all know, to do something 9-5 and then come home, deal with the house, eat something resembling a meal, spend time with the people and animals that you love, and still -- still -- find time to make things.

Case in point.  I have sixteen shows (so far) between now and the week before Christmas.  Sixteen.

And I think I have enough inventory for three or four shows.  And that's saying everyone doesn't want to buy the same thing, in which case I probably have inventory for two.

Today is my day off, so I'm taking a break here now and then going back to the assembly line.  That's what it is at the moment -- I have 30+ mini bears with freshly embroidered faces, 8 newly cut out dresses, and a stack of cotton prints and batting that need to be cut into squares for microwave bowls.  (Those are good because I can take the pieces into the office and pin them together at lunch, and sometimes even on my desk when no one's around).

I'm also going to need more sweater animals, and I haven't yet taken inventory of the mittens, but either way, that means my machine is going to go back on her weekly cleaning schedule so I can avert the wool-fuzzy-catastrophe that happens when I don't pay enough attention to her during sweater season.

So pressure, yes, but it's still fun.  I'd still rather be doing this than sitting in a small box in an over-air-conditioned big box, mostly waiting around for someone to give me something to do. 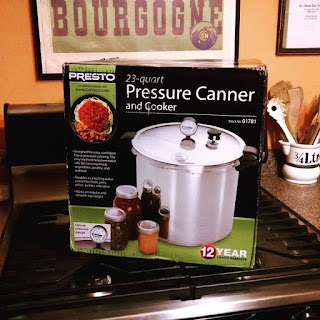 My "summer job" is ending the Friday after Labor Day, and not before time.

Add to that the fact that I have enough merchandise for about 3 shows, and that the holidays (and therefore, custom order season) are almost upon us, and I'm really getting antsy to get the job over with.

But while it's still going on, and while I have this steady money coming in, I've treated the house (and occasionally  myself) to a few not-quite-luxuries, this being one of them.

Hopefully this weekend it'll get taken out of the box.  I don't have a show, and so long as the kitchen isn't 90 degrees, I think I'll pick up something at the farmers market and fire this baby up and see what it can do.  I really want to expand beyond tomatoes and pickles, and a pressure canner will allow me to can soups, low-acid vegetables, even meats.

Now I just need to work up the nerve to try it out.
Posted by Karen at 9:49 PM 7 comments: 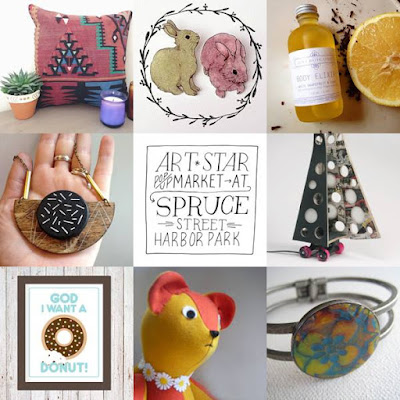 After a week at the office, with a break on Thursday to teach an embroidery class to a kids' history camp (fun but exhausting), it'll  be nice to spend the day down at Penn's Landing, working on my sunburn.

Forecast says 90 degrees and sunny.  There'll be a good breeze off the river, and I've got a gallon jug of water and a tube of sunblock.

The only adult in the room

I've been thinking the past few days about how our personalities as adults are really formed by the kinds of adults our parents were.  Or weren't.

There are things going on right now that I'm not going to get into on the blog, other than to say that they're more inconvenient and annoying than serious; no one's health is involved; Mario and I are still happily married; and the cats are all fine.

Anyone who knows me knows that while I'm pretty laid back, I also generally have my environment under tight control.  I know what's going on, because I'm the one who set it up and who keeps it that way.  Everything is my responsibility.  All the time.  It always has been.

This is bad for several reasons.  First off, because it's freaking exhausting to be in charge 24/7, especially when you admit it to yourself.  Second, because the people around you who love you and who actually could take some of the burden from your shoulders either don't ask (because they think you've got it covered) or ask and you blow them off because, hey, you've got this.

I had to admit the other day that I'm not Superwoman, that I can't do everything on my own, that I'm not physically or emotionally strong enough to do everything by myself, every day, all the time, for everyone in my orbit.  And I don't need to.

Explaining myself to Mario the other night -- amid the meltdown that I finally allowed myself, and which he handled beautifully (it's only the second one he's seen in 10 years) -- was weirdly enlightening.  The more I talked, the more I thought to tell him.  I try to do everything because I'm used to it, because I've always been surrounded by people whom I couldn't trust to do their part.  I explained that my behavior isn't a reflection of him, but of me, because I'm so accustomed to the other situation that it's still difficult to believe that I do now have someone I can trust to do their fair share, and occasionally more.

A lot of this stems from my childhood.  My dad died when I was 9, and while he was a grownup, my mom . . . not so much.  She always made sure there was a roof over our head and food on the table, but I never felt secure -- it always felt like she might get distracted and forget to pay the bills, which she did, in fact, do.  So I took over writing out the bills when I was 10, and handled most of our finances.  I "borrowed" money from her wallet while she slept so that when she overspent by the end of the month, there was cash on hand.  I made her grown up existence as easy as possible so that it wouldn't be too difficult for her to do the few adult responsibilities I had left for her.

I moved out 3 years after she remarried.  (She remarried when I was 16, specifically because the Social Security she got on my behalf was drastically reduced, and we couldn't make it otherwise).  But at 19, she was someone else's problem, and I already knew I could take care of me.

This behavior continued on, and now, here I am at 51, just beginning to realize that maybe, just maybe, I'm not the only adult in the room.
Posted by Karen at 6:21 PM 7 comments: