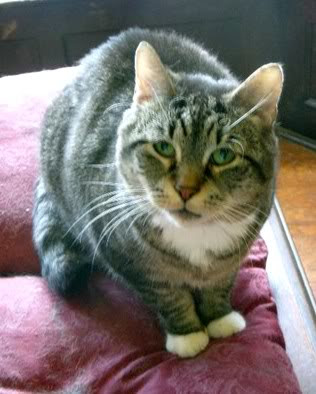 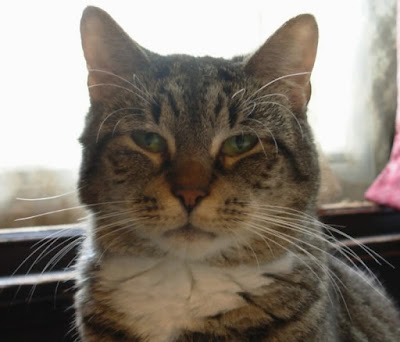 She was all those cats and more. Mom to Nicky and Harriet, both still around (one oblivious, one looking for her). She will be missed.
Posted by Karen at 7:51 PM 15 comments: 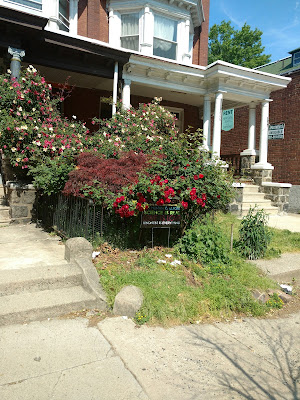 These weren't blooming a week ago, but apparently Mother Nature has decided she's tired of endless March and has gone straight to July.  It's 90 today, and 2 days ago, it was 40.  Go figure.

One part of my landscaping that might not have survived all the weather-induced drama is my young street tree.  You'll note the leafless shadow on the sidewalk.  It had begun to bud and we got one last, hard frost and all the leaf buds turned black and fell off.  Now it just looks sad.

Maybe it'll come back.  And one thing I've learned in all my years of gardening is that there's no point in crying over a dead plant (or tree).  It's just an opportunity to try planting something new.

Happy spring, everyone.  Hopefully you haven't gone from shivering to sweating in the space of a few days.
Posted by Karen at 11:50 AM 1 comment:

I had to share a something that happened yesterday.  I was heading out to lunch with another woman from the offioce, walking down to Reading Terminal (a large indoor food market in Philly), and because she didn't have her jacket, we decided to cut through Macy's instead of walking around the building.

I can't tell you the last time I was in a department store, let alone a Macy's at lunch hour, with the big Wanamaker's organ playing in the background and an anthill worth of people milling around.  Why do those stores always feel like it's Christmas?

It stopped me for a second.  All the stuff was just overwhelming, and I realized as we continued our walk that the extent of my shopping in the last few years has been for food or fabric, or at thrift stores.  Being inside an actual, huge retail establishment was weirdly disorienting.

And yet, that kind of shopping used to be a way of life.  Maybe not department stores (at least for purchasing), but I was a happy browser and would go in any store and look around, more often than not coming out with a bag of something that I didn't really need -- and probably just recently unearthed and donated. 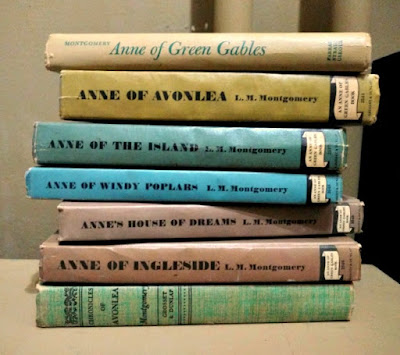 While I wouldn't call myself a hoarder, I do keep things.  Lots of things.  Some for sentimental reasons, some because they're useful.

Some because I just haven't found the right home for them, and they can't just be given away.

I've had my set of Anne of Green Gables books since I was a kid.  The first book came for my 9th birthday, and I accumulated the rest over the next few years with my allowance money.

I loved those books.  And they couldn't just go to the thrift store or get left in a free box.  They needed to go to someone who would also love them.

Last week in sewing class, one of the girls said she wished she could just be left alone to read, write, sew and pet her cat, and I knew I'd found the right person.  I checked with her mom to make sure she didn't already have them, and once that was confirmed, I dug them out and got them ready for their new home.

Hopefully Phoebe, and her younger sister, Hannah, will get as much enjoyment from these books as I did.

And it's good when the universe puts the right person in front of you know when it's time to let go.
Posted by Karen at 1:16 PM 4 comments: 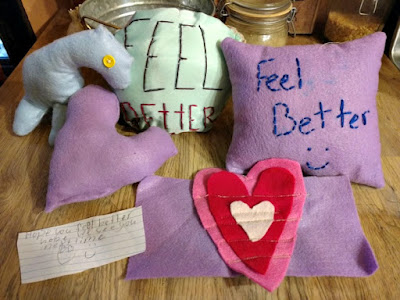 Well, I survived the weekend.  Barely.

Sometimes you just have to realize you're not Superwoman.

To say that I was exhausted after 2 long days of being personable, on my feet, in the sun (and dealing with the inevitable sunburn because I never remember sunscreen), would be an understatement.

And then I strained my back.  Not badly, just enough that when I went to work on Monday, I knew I should have stayed home, and flat.  So I contacted my afterschool sewing program, made sure my assistant could cover for the day, and stayed home and flat on Tuesday.

That evening, I got a text from Kia.  She'd left a package for me in the box on my porch.  When I went to get it, this was inside -- a little something from the kids, who apparently missed the teacher who spends all her time saying, "No, you can't do that."  "Get off the table."  "Stop climbing on the window seat."  "Don't lean out the window."  "Those are sharp, don't poke her."  "Don't wave the scissors around."  "Didn't you hear me the first time?"