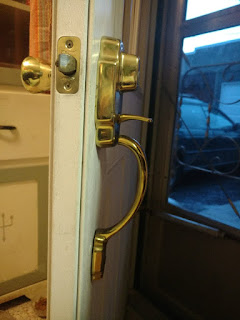 The old house is almost empty.  The only things left are tools and cleaning supplies.  After this weekend, (hopefully) we can hand the house off to the realtor.

We stopped there after work yesterday and brought a carload of assorted items from the basement, attic and dark corners of my workroom.  We parked in the driveway, unloaded by the back door, and I unlocked the door.  Or attempted to.  It didn't work.  I checked; I had the right key.  I tried again.   .

Mario tried his key and it didn't work.  We both stood there for a second, staring at our suddenly-uncooperative door.  It reminded me of the time several winters ago when I turned on the kitchen faucet and nothing happened - your brain is just so used to faucet = water that it didn't compute when the water didn't happen.  (The pipes were frozen, but it took a few seconds for the realization to sink in).

Mario let himself in by the front door and was able to open the kitchen door from the inside.  He was going to call a locksmith, but it wasn't a key/lock issue, it was apparently that the entire handleset was somehow wonky, and I didn't think that was worth paying someone else to tell us.  We looked up new, similar sets online and while they're expensive ($150ish), it's something that lasts for decades, so it's worth it.  We decided to let it go and just use the front door for now, until the old house sells and we have more cash on hand.

After dinner, as he was settled in on the couch, talking back to MSNBC, I got my work light, some lock lubricant, a couple of screwdrivers and a pair of pliers, and went to work on the door. Oh, and a glass of wine.  Lubricant for me, as well as the lock. I got the old set off, took it apart, cleaned and reassembled it.  A few interior screws were loose, and while I can't fix the screw at the bottom of the handle (it's both stripped and corroded, so I can't even remove it), I was able to get the whole thing back together, on the door and functioning.

It's not perfect, but I'm optimistic that we can get another 6 months out of it. And if I was able to temporarily repair and reinstall this lock, I'll easily be able to install the new one.

They call it the Ikea effect, that rush you get from completing a task yourself (albeit sometimes imperfectly), rather than paying an expert to do it for you.  It feels good.

Our new town looks pretty in the snow, a little like Bedford Falls.  Frank Capra-esque charm aside, this is the third snowstorm in less than 3 weeks, and my second snow day in 2 weeks, and yesterday was the first day of spring. 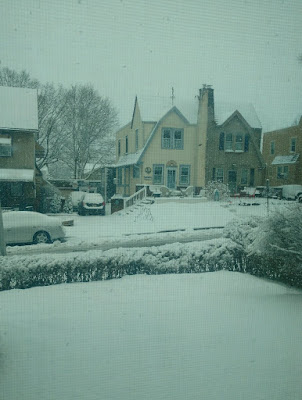 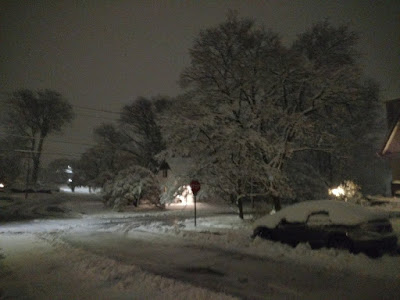 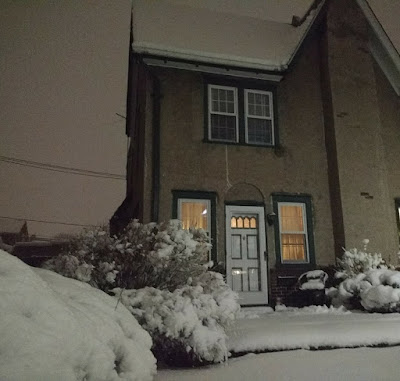 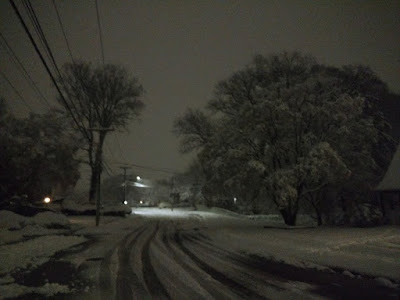 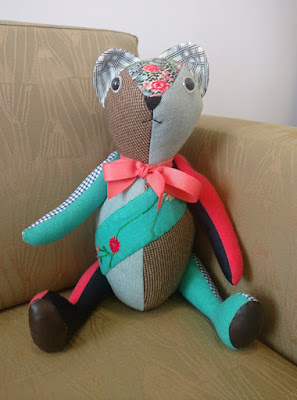 In the midst of packing to move, I was contacted by a woman who I'd met last summer at a craft show in South Philly.  We'd talked generally at the time about custom bears and she took a card, but that happens at nearly every show and people rarely follow up.

Her daughter is having a baby very soon, and she reached out because she wanted to make a "family bear" for her.

Every piece of fabric in this bear came from a piece of cherished clothing from one family member or another.

I met up with her at lunchtime from the office, heard the stories about each piece of clothing, each person, and took the bag home to start her bear.

Trying to get in "maker mode" when I was in the middle of packing wasn't easy, but once I started laying out my pattern pieces, this little guy came together.

A friend stopped by  as I was stringing him together, and she said, hoping not to offend, that my work was beautiful, she wasn't so sure about the bear.  I understood her meaning, but said that the bear would be beautiful to my customer, because of all the people it represented, and that the only part of the piece I could control was my work. 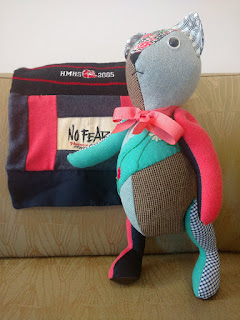 The small blanket behind the bear in the second picture consists of pieces donated by the baby's father's family - a "no fear" hat, a gray cashmere sweater, a dark silk from a dress, and a wool hat from both parents' high school.  (With a little of that salmon jersey to tie it all together).

I think it's a little alarming, but in a good way, and my customer burst into tears in her building lobby, so I'm taking that as a good thing. 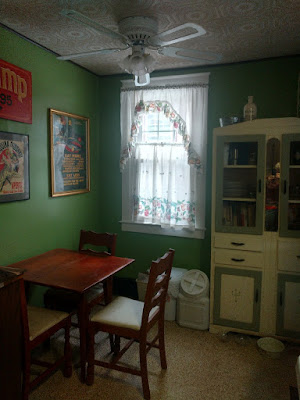 Well, our move was delayed by a snowstorm, and here we are, just a few days later, getting hit with another one.

No matter, it just gives me more time to unpack.

The kitchen is basically done, other than making new curtains. The previous owner left theirs behind in all the rooms on the first floor, and I appreciate not having to rush to make new ones. Even these apple print ones in the kitchen are pretty neutral.

You'll notice the kitchen is green, instead of orange.  That's because the main house color living room/dining room/hall - is a warm terracotta and I didn't want us overwhelmed with varying shades of orange.

I'm a little frustrated that I don't have room for all my art, but the limitations are good. I'm being forced to choose my favorite pieces. 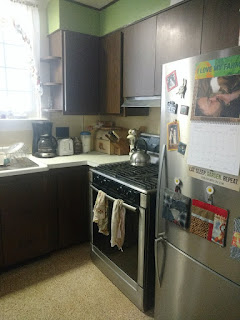 Here's the kitchen so far.

The cabinets will get redone or replaced somewhere down the road, but now that I've painted the walls, I don't mind the color as much.  My least favorite part is the Formica backsplash, which started out as white with gold flecks but has yellowed over the decades. It's a small thing. I'll think of something to update it when we've dealt with the rest of the place.
Posted by Karen at 12:01 PM 3 comments: