Sunday morning, we slept in. Saturday was a late night, whether we liked it or not. It was interesting to find out that stupid drunken young guys sound just as stupid and drunken in French as they do at home. Rue Saint-Antoine is a busy street, and with the tall buildings and the narrow streets, sounds are really magnified. But this: all night long, cars, buses, motorcycles, yelling, singing, the occasional random howl, and then promptly at daybreak, the trashcan symphony. When the man rolled over and refused to get up, I didn’t argue.

Sunday’s hazy plan included the Picasso Museum, which was close to the hotel. We stopped at a nearby café for breakfast and then wandered the streets for a while. There are a lot of men’s stores in the area, and someone showed a surprising interest in all the shirts in the windows.

A lot of them were in interesting patterns, with the inside collar band and inside cuffs done in a contrasting pattern or solid. The buttonholes and buttons were done in a color that matched the contrasting fabric. He immediately decided he needed a new shirt. (I’ve done wonders with him, and Paris hasn’t hurt either).

Once we did the museum – no particularly famous pieces but a wide selection of sculpture and a collection that addressed all of Picasso’s many periods – we walked back through the shirt corridor in the Marais and headed for the left bank.

It was still pre-lunchtime, so we crossed over the Pont Sully, walked past Notre Dame again – the crowds were back – and went to the Jardins de Luxembourg. The gardens were beautiful, and packed, and we sat at the fountain for a while watching the kids (and some adults) with their sailboats. Then we wandered through the rest of the gardens, looking at the sculpture (both classic and modern), enjoying the shade, having another ice cream. 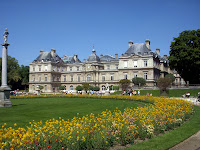 There were pony rides for kids, but apparently I'm too big. Go figure.

When we made it back to the hotel, we realized that the heat had really gotten to us, and we napped until around 7:00 p.m. Dinner was at a restaurant near Notre Dame we had seen the night before – amazing mushroom soup, sardines (which looked nothing like the canned skinny things I’ve ever seen before) and some more rose. A final ice cream and bed. My sunburn hurt.

I've been following this and, boy, am I envious. Someday my little ones will be older and my husband and I will have more freedom. siiiiigh