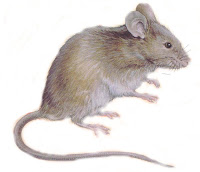 Consider this post as Chapter 38 of the continuing saga, I Love My Old House.
For the past week, whenever I went into the shed (which is attached to the back of my house, off the kitchen) I've noticed that it smells a little funky. I thought maybe it was the trash, though it's certainly not warm enough for the trash to smell. Put the trash out Monday night, it still smelled. Tuesday, it smelled a little stronger, and I didn't like where my mind was going. Made Mario, who has the world's worst nose, smell it, and he said, "Have you accounted for all the cats? It smells like something died in there."
Cats were all accounted for, but it did indeed smell like something died in my shed. Or under my shed. Or in between the walls and vinyl siding on my shed. Originally, I planned to dedicate Saturday to emptying it and locating the source of the funk, but I couldn't take it. I was up Tuesday night obsessing, and yesterday at work I kept thinking how much worse it would be by the weekend.
So last night, I put on old clothes and tore into the mess. You may remember that a few months ago I had a leak in the shed roof. Other than cleaning up the immediate mess and paying for the roof repairs, I kind of neglected to deal with the rest of the problem. I procrastinated on the insulation and new piece of ceiling drywall, and I thought that's all I was ignoring. Well, apparently there was more water damage than I realized - the shed slants downhill to the far corner, and lots of water had run stealthily along the floor, making muck as it passed. At some point, the mouse must have gotten in, and at some later point, after much chewing and pooping, the mouse died. Possibly from eating potting soil, compost activator or the epsom salts I keep for my roses, all of whose bags and boxes were chewed open from the bottom and the contents scattered all over the floor. (This was hidden from view by my clothes drying racks, which were stacked up in the narrow center of the shed, waiting for spring).
Eight trash bags later and I'm still not finished, but I've found the body, disposed of it, and sprayed enough bleach cleaner in there to disinfect the whole house. I stuck my head in this morning, and the funk had definitely decreased. It's not completely gone, but that's because I haven't torn everything out yet. I'm debating ripping out the last of the old linoleum, because it too got water soaked and is probably accounting for a good bit of the smell that my mind has identified with the dead mouse.
I am completely grossed out by this. I know it happens - it's an old house, it was a cold winter, I had a situation building in there that basically set out the welcome mat for him, but I still feel like having mice mean I have a dirty house. So the reign of terror has begun. One little suicidal mousie - come on, sneaking into a house with 12 cats! how dumb was that mouse? and yet he died of other causes - and I'm ready to take half my house to the thrift store. I had to stop working in the shed around 8:30 because I lost the light, but then I went upstairs and tore through the workroom, getting rid of all the scraps I had that were too small to do anything with, dealing with the leaning tower of magazines in the living room that are mostly heading for the thrift store or recycle bin, and doing a good scrub of the kitchen while I was at it.
I took a break around 10:30 to work on another set of tshirts - Burdastyle for him, KS 3338 for me - and got the shoulder seams and neck bands finished before I felt the need to clean the bathroom. And so it went. I finally got to bed around 2:00 a.m., and I was so tired then that I couldn't sleep.
Posted by Karen at 12:22 PM

It's hard to believe. The cat lady was inspired by a mouse. Yet, you did go after that mouse (or the smell) in typical cat fashion. Honestly, you seem to attack everything with a passion whether it's the house or sewing. I love your refashioned blouses - especially the S2936 from the skirt. I agree: Let's show those legs while we can!!

Things could be worse! My parents also have a shed off the kitchen, exactly as you describe (must be a PA thing!), and we came home from vacation one year when I was a kid to find two 6 foot black snakes MATING in the shed! Really, dangling from the ceiling down to the floor, entangled and knocking loads of cans off the shelves in the process. My dad, to his credit, got out the camera and took an entire roll of film, then dragged both snakes outside with a hoe then used said hoe to, err, "finish" the problem. Not bad for an office-bound state worker! As you could imagine, the entire episode rather stuck in my mind.

So your mouse might be long gone, but think of all the future intruders you're preventing by cleaning and sealing everything now!

Having lived in the semi-rural south most of my life, I've learned that (a) mice are envitable (b) you have to get rid of stacks of magazines, newspapers, paper bags, etc. (c) pet food needs to be stored in metal (not plastic) trash cans (yeah, learned that one the hard way and I still squirm when I think about it). Don't use D-con if you have pets - especially cats. It will kill the mice, but if the cats eat a dead (or dying) mouse, the cat will also die. Traps DO work, buy a bunch of them and toss when, um, full.

Yeah.... same thing in my house. Under a radiator. I didn't know where the smell came from. But, I tracked it down. Yuck. Which reminds me, I have a pattern that a mouse got to that I keep meaning to post.

I hate mice. I manage to catch a all of them in the traps eventually, but it's the ones that you are sure are around and damaging your stuff, but you can't find or catch for a day or two that are the worst....

Or the ones that die in the walls from the D-Con a former occupant put somewhere.... DH finally took a wall apart in a closet to remove the carcass of that one. UGH. Enough to drive you out of the house permanently.

Okay, the joys of living in the country in a vintage craftsman style house are many. The mice are NOT part of the joys.

Did I mention that I hate mice?

Get some rest okay? Try to remember that having mice is NO reflection on your worth! But consider letting the cats spend some time in the shed occasionally... ;)
Elaine

I laughed when I read this. I live in the Australian bush in a very old house built by a farmer, so the workmanship leaves a lot to be desired. I have a problem at the moment with a rather large bush rat coming in to my house and stealing bananas. I've caught him in the act twice now. I suspect I would have more rodents were it not for the massive carpet snake living above my bathroom. Given that bush rats and antechinus are native and hence protected, I can't kill them, so I am pleased for the snake control.

Every three years or so some animal dies either under my house or in the wall. When it's under the house, I just squirm under there and get the body, but when it's in the wall, it's impossible to find. Twice now we've had to seal off the master bathroom for about 5 months until the smell goes away.

When my mom dies, I had to go through her things. She lived in a mountain cabin where it's practically impossible to keep the mice out. While going through her shoes, I found just about every pair that she didn't wear completely filled with cat food. The mice were stealing and hiding it. Dad said he thought the cat was going through more food than was normal, LOL.

I thought about you today when I was watching "Mouse Hunt" on TV. Have you seen that movie? It is Laugh Out Loud hysterical.