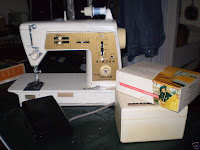 So I bought myself a new toy off Ebay last week. I've been reading blog posts and the thread on Patternreview about the old Singer professional buttonholers, and I wanted one. I read that you can get them to work with newer machines, but when I started looking at them on Ebay, I realized that most of the time the machines that they were made for weren't that expensive, and it would be good to just get a new (old) machine with the buttonholer and set it up on its own.

I found a Singer 640 Touch & Sew that cost the same as round trip train fare to New York to have buttonholes done at Jonathan's. It arrived yesterday. I took it out of the box at work, and I wanted to start playing with it right then - it looked like it had hardly ever been taken out for a drive. The buttonholer was still in its original box, all 20 buttonhole templates were with it, all the fashion discs for the embroidery stitches were present and accounted for, and it had 13 different presser feet and a dozen oddly-shaped plastic bobbins. It had the original instruction book for the machine and for the buttonholer. It had everything. Except one teeny-tiny missing piece - the buttonholer screw that attaches the buttonholer to the sewing machine.

Apparently the buttonholer was used once. Grrr. 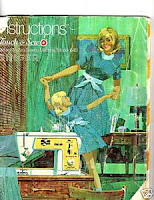 Now I had emailed Singer back when I was thinking about just getting a buttonholer and seeing if I could make it work with my newer Singer. It took them 8 days to answer my email (the customer service line never picked up) and then they said they didn't deal with vintage Singer machines or questions about vintage Singer machines. Okay. They gave me the numbers for various regional Singer service centers that might be able to help.

I called the one in Syracuse this morning and explained my dilema - completely immaculate machine, missing one screw. "Oh," says the woman on the other end of the phone, "is it the buttonholer screw or the buttonholer cover screw?" I say it's the buttonholer screw. "No problem," she says, "we have a bunch of them. Give me your address and I'll pop it in the mail this afternoon."

No charge. No stress - at least not once I contacted the correct branch of Singer. So if you ever need anything for your machine, call the Syracuse service center at 800-321-7397. They're good people.
Posted by Karen at 11:00 AM

That's the exact machine I learned to sew on! I love and miss being able to wind the bobbin in place.

Doncha love to recommend a good business! Now you have ME thinking about why I never thought to do that! Only question- where are you going to put it, and can I see it in action please and thankyou when I come out/over/down in May?

Karen, I just wrote my very first blog post about this same machine!

If you find a need for repair-type info, here is a great source:

I used his instructions to completely remove, clean and reconstruct the tension mechanism on mine, and it worked out great!

I'll second the service at this location. I've had great luck with them. Our local (advertised as a Singer) dealer was of no help at all. They tried to sell me a very expensive generic item instead. I had the part shipped from Syracuse and was exactly what I needed.

That kind of thing tends to make your day.

What a great find. I had a Touch and Sew. Ahhh-sweet memories. Wish I still had that machine.

I have that very same machine, too! It was the first machine I ever owned, got it for Christmas (used) when I was in junior high, and still the most reliable I ever had. Sewed millions of miles on that thing. Still love it for buttonholes. Wish I'd known, I have two buttonholers! Have fun with it. K

Thanks for the heads up!

OMG - parallel lives! This week I received the new/old Singer FashionMate from my ebay shopping. It was the last idea I had to solve my vintage buttonholer problem. I wasn't patient enough to wait for anything better than a machine that works. Yours looks like a real gem. Good news is I've tried a buttonhole and (if I can solve the bobbin tension issues) it works! Best buttonhole ever! Hope you have the same luck!

Nice to know that customer service like that still exists.