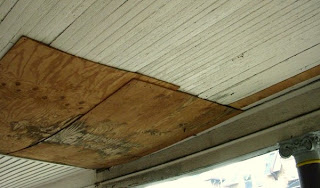 I'm somewhat recovered from my house-induced snit, but in the interests of full disclosure of why I was in said snit, the photos here should show the high (and low) lights.

1.  Existing 100+ year old ceiling, with 2 big plywood patches over holes that were in the ceiling when I bought the house.  When it was only a 90+ year old roof.  Not visible in that photo: the single hanging CFL bulb in lieu of a light fixture. Snazzy.

2. Existing 100+ year old ceiling with plywood patches torn off, exposing very large hole cut in porch roof (apparently there was a skylight up there at one point; the logic of that escapes me), patched with another  sheet of plywood, and the cut off rafters and joist patched with stick-like pieces of pine. 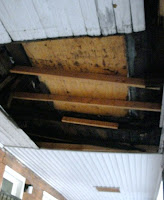 It was sufficiently bad that it cost an extra $800 in lumber and labor - 5 rafters, a new center joist, a full extra day of labor and my roof is now 4 inches higher because they jacked it up to where it should have been.  Amazingly, when I look out my bedroom window now, there is no pool of standing water on the roof. 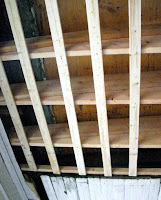 At least I know it worked.

4.  My finished porch.  Is it weird now that when I look at that long, smooth expanse of primed ceiling, I feel a sense of . . . anti-climax?  Before it was so horrible, and then it got worse.  Now, it's repaired and white and flat.  And kind of bland.  Paint will happen, probably next year.  After I can afford to fix the floor, which is in as bad a shape as the ceiling, especially after they put a leg of one of their ladders through it.

I don't begrudge the money to my contractor.  He's an annoying, abrasive, opinionated man who does meticulous work and only does it in what he considers the proper way.  If I had vetoed installing those new rafters, he would have refunded the appropriate amount of my money and taken his tools and gone home; he wouldn't have done it half-assed.  I do appreciate that, but my savings account has the vapors. 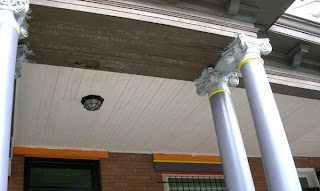 Can you wave smelling salts the nose of a bank account?

On the Etsy front, I'm not going to keep posting goodies here, I'll post them there, where they belong.  Just one final shot: the pirate's chest of rhinestone goodness that is the combined booty of the mom, great-grandmom, 2 great-aunts and a not-so-great aunt.  That's a lot of sparkle for women who never went out much. 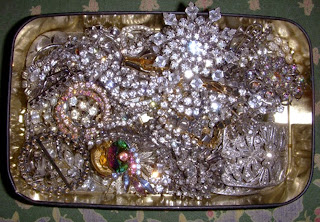 Not much sewing this week, but it's going to be hot again this weekend, so you know where I'll be.  More later.
Posted by Karen at 11:07 PM

The ceiling porch looks great! I know how you feel, I have been holding off fixing my crumbling brick steps but I got to do it this summer I don't think they will survive another winter.

I know it was hard given up the cash, but now your house is all better.

Your new roof looks wonderful. It always hurts the pocket book, but unfortunately that which shelters us does need attention from time to time.

Hey, think of it as one more thing crossed off the "list". I'll bet there is a long list on your beautiful, old home.