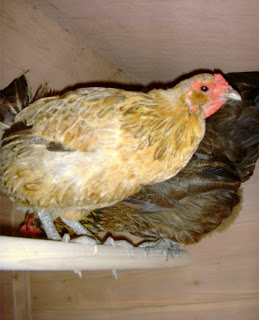 I've wanted chickens for a while, but we didn't think it was time.  I did a lot of re-landscaping in the back yard this year, the point of which was to make room for next year's eventual chicken coop.

Then serendipity got in the way.  A week ago, we went to a party at a friend's house.  I got to talking to a friend of hers who keeps chickens.  It made me think again.

The next day, a message came through on our neighborhood listserv about a local CSA farm that was getting out of the egg business due to severe raccoon problems (they are still in the city but more suburban than my area).  They had 14 chickens who were looking for new homes.

I emailed Mario at work and told him.  Wonderful man, his only question was, "Are we ready?"

Is anybody ever ready when change comes along?  I figure things happen for a reason, and when they do, you roll with it. I emailed back, and asked for 3.  Within a matter of hours, they only had 2 chickens left - in a city that doesn't allow backyard chickens.  When I stop finding dime bags in my front yard, I'll start worrying about who's keeping illegal poultry.

Two days later, a chicken coop was on its way, and on Thursday, we got it built and installed in the back yard (in a completely different but much more practical area than I had originally planned).  On Friday, we raccoon-proofed it - hardware cloth stapled to the entire floor of the run, then covered with dirt and bedding, and spring hooks on the doors.

We were as ready as we could be. 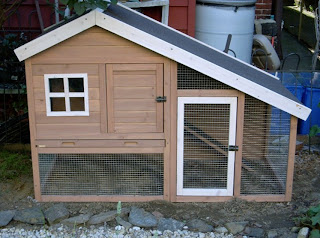 This morning, we picked up the girls.  They were bundled up in a big cardboard box, taped shut.  We drove them home, and I carried the box up the alley to the back yard while Mario parked.  I untaped the box, put it down in front of the open coop door, and shook the box.  The smaller chicken (the one in the front of the picture) walked into the coop.

The second chicken, bigger and darker, flew straight up in the air, landed somewhere behind me, did 2 high-stepping laps around the yard, tearing off mouthfuls of leaves from every passing plant, rose up again and flew over a 4 foot chain link fence, ran down the alley next door, out through their locked gate and out of sight.  In a matter of seconds.

During this time I ran and swore and dove at the bird, but she was too fast.  I ran down the alley after her, only to find that Mario locked the gate because he would, obviously, be coming in the front door.  Thankfully he got back just then, saw me and unlocked the gate.  I run past him, see an older man standing outside the karate studio down the street.  "Have you seen my chicken?"  Completely unfazed, he points left.  "He went that way, ma'am."

We track the chicken by the people standing on the sidewalk, either puzzled or laughing.  We track the chicken through the double doors into the thrift store where I do a lot of my shopping.  We eventually track the chicken into a corner behind a rack of hangers.  With an authority I didn't really feel, I got hold of the chicken and called for a box.  Mario found one, and for good measure, we put the box in a trash bag and carted her off home.

This time, she went into the coop.  A little huffy about it, if you ask me, but she went in.

They're a little stressed right now, between multiple raccoon attacks at their old home that killed over 2 dozen chickens, then being moved to a temporary home, then moving again today.  (Plus that little unplanned adventure).  But they're eating, they're drinking, and eventually, they'll be calm enough to lay us nice pale blue eggs.

I noted when I was hunting the chicken that it was half price day at the thrift store.  I went back a little later and spent some money, just to make up for the fuss we'd caused.
Posted by Karen at 11:00 PM

Thank you for the laugh! I had fabulous visions of the chicken running down the road. :)

Oh FABULOUS! Keeping chickens is more popular these days in the UK too, hope you get great egss soon.

You crack me up! In a panic you just happen to notice a sale at the thrift store?

Awesome venture and the chicken coop is adorable. Looking forward to your pale blue eggs.

What an adventure for all of you. I just laughed out loud and had to read this to DH since we too know about urban life.

That was fun to read! They don't allow chickens in my city either. A neighbor of mine went ahead, on your theory (minus the front yard bags, thank goodness), and had a similar adventure when moving them in. sadly, it ended up with cops and bylaw officers in attendance. Someone ratted!

I'm going to ask stupid questions: Don't you also need a rooster? Does having no rooster mean you get eggs, but no chicks?

Except for a few years, I have lived in this city for many, many, years and never knew anyone who raised chickens. I am so excited to follow this adventure of yours. Hopefully, some day I will meet them as well. Mimi

Good story! Where did you get your coop? We are in the planning stages to have hens next year. We live in a residential area where we are not allowed to have livestock, but we can have a pet that just happens to have feathers and give eggs - two, if the neighbors don't complain!

Elaray, do you need a little talk about the birds and the bees? ;)

Congrats Karen. I wish I could have sunday brunch at your place with some nice eggs.

Oh my God! I laughed so hard!
Congratulations!

By the way what happens in the winter time? Do you have to get a heater for the coop?

oh, Karen! I always enjoy your blog, but they don't typically make me laugh out loud! This one did! Congrats on actually tracking down that Houdini hen.

OMG! What an adventure. I admire your calm in the face of chicken mishaps! I alway figure when I'm in the middle of doing something crazy (or craziER as my husband says), I'm giving people something to talk about at supper....building community, you know?
Congrats on your new chickens!

When you told me about this yesterday, I was cracking up, and I'm still laughing. I wish I was there to see the whole thing. I would have loved to see you bent over holding a chicken in the store. Too funny.

We got chickens for the first time at the start of this year, they were four weeks old when they arrived. We got our first egg this week. Very exciting . Enjoy your girls they are so cute.

Great story!! The coop looks like a chicken palace, I hope they will settle down in it soon, maybe throw in the odd thrift store shopping trip too. Are you going to give them names?

LOL That's a great story. I'm glad you were able to "coax" her back to her new home (which is mighty fine BTW).

Reminds me of occasions in my youth when we would (or Mom would, trailed by us) chase our sheep through residential neighborhoods when she would escape.

Do you let them out of the coop during the day?

So she flew the coop, did she?! We had chickens for a while, and one would nest nightly on our porch in one of the hanging baskets.

And you can't even ask why your chicken crossed the road because the thrift store is on the same side as your house!

What a great story! I love chickens too.

no you don't have to have a rooster to get eggs....just chicks.....and if you put a light bulb in the house in the winter they will still lay eggs....takes 24 hours of light going through their eyes to make an egg....and also giving them warm water will help......give them your scrap foods....