Not a lot going on in the sewing room - Mario's shorts are all cut out, and while I'm interested to see how my pattern alterations turn out, I've been distracted.

It rained yesterday - all night and into this morning.  A nice, slow, steady rain, instead of these slash-and-burn thunderstorms we've been getting.  I sat on my back step this morning and smelled things growing, which beats trying not to brush up against a tomato  for fear that the brown and brittle leaves will crumble. 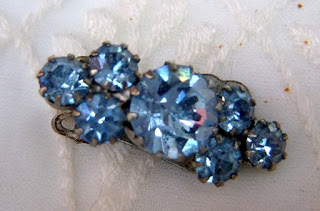 Tonight there were peppers when this morning there were none.  This nature thing is really something to reckon with.

A good part of tonight was spent in the kitchen.  I went to Reading Terminal today, which for the non-Philadelphians is a huge indoor food market, with prepared foods, restaurants, butchers, fishmongers, and several fruit and vegetable markets.  There's also the Fair Food Farmstand, which is where I get all the local and organic I don't grow myself.  But today, one of the other markets had a special on cherries.  I happen to have a major weakness for cherries, and their season is so short.  These were a good price, so I bought . . . 5 pounds.

After pitting 5 pounds of cherries, my fingers are too stained to deal with fabric.  2 pounds were halved and frozen, quite a few were consumed while standing in the kitchen, about a half pound are going into a batch of cherry vanilla ice cream, and the rest are going into my new food dehydrator this weekend as an experiment.  I love experiments.  Especially when they yield food.

One last thing before I go:  I'd like to thank my packratty family, who left me with such an abundance of shiny stuff that I will never, ever be able to wear it all, and whose bounty, offered on Etsy, has retroactively paid off a nice chunk of my porch bill.  Shop on, people, shop on.

I think what makes me happiest about the Etsy sales is that when I first got the bad news about the repairs, I had a small meltdown and was upset at the house for being an ungrateful pile of bricks (actually, still a little pissed at the house).  Then, after I calmed down, I realized that I had at least some of the means to make this less of a burden, and all I needed was to get off my duff and take care of myself.

That's my pollyanna thought for the day, folks.  When life gives you lemons, squeeze 'em.  Someone's bound to be thirsty and want to buy your lemonade.
Posted by Karen at 11:54 PM

Well said. You are your own therapist...think of the money you're saving!

I envy your multiple rain barrels with a nice long shower like that! We are having rain here in SW Virginia. We had only two rainshowers in July, with 98+ temps much of the month. Things are brown and crispy - the grass hurts if we go out barefoot. Believe me, I only water the veggie garden. (we pay for water, as you probably do)

So, rain, finally. Maybe now I can stop worrying about the vegetables (and risk of fire started by idiots burning brush) and get downstairs and sew!

So glad your heirlooms are helping you sustain your present and protect your future!