It's all about the clothes 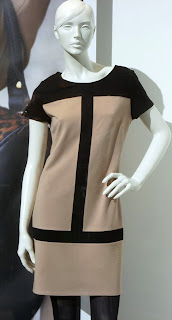 So of course there's more to visiting Paris than the clothes, but seeing who I am and what I do, I do tend to pay attention. A lot.

What I saw quite a bit of on the streets:

Capes, surprisingly.  The cute short ones that BWOF has been showing.  I didn't think much of them in the magazine, but seeing them on real women, moving around, I liked them.

Shorts - everything from Daisy Dukes with fishnets (on the twentysomethings on a Saturday night) to dressy wool shorts that end with a button-tab and cuff just above the knee.

Ankle boots - with pants, skirts of all lengths, and the above-mentioned dress shorts. 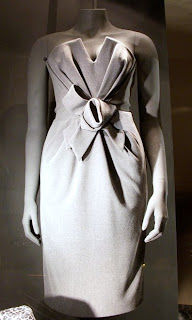 As far as specific trends for women, it seems anything goes, but particularly extremes - skirts either to the ankles or barely below your underwear.  Pants skinny to the ankle or billowing wider than hip-width.

Men wearing more - and brighter - colors than the women. As in I lost count of how many men I saw wearing red corduroy trousers. Or orange. Or yellow. Or green. It wasn't a trend Mario took to, thankfully, though he tends to notice how much sharper European men dress than American men.

And then, of course, there are the store windows.  These were my favorites.  The color-blocked dress above is going to be coming out of my workroom sooner rather than later.  Isn't it fabulous?  I might change it from tan and black to something-more-flattering-on-me and black, or I might not.  Need to see what's in the stash that will work. 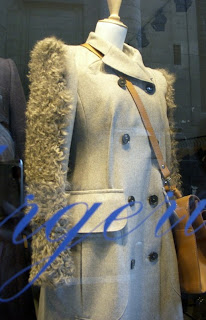 The second dress reminds me of something from one of the Japanese pattern magazines - there's a bit of origami in there somewhere, and I love it.  I don't know a lot of people who really look good in these types of garments, but I love looking at them.  The color didn't come up well (night photography with glass in between) but it's a very pale pearl gray, just a shade or two darker than the mannequin.

Look at this coat.  The first thing that caught my eye, of course, was the fur down both sleeves.  Then I actually looked at the sleeves, and the very strong shoulder that's supporting all that fur.  It wasn't until I got home that I noticed some of the finer details - the darts on the front are sewn to the outside, for example.  And it's princess-seamed.  And double-breasted.  With a lovely collar, outsized buttons and uber-outsized cargo pockets.  It's a lot of look, and one of my favorites. 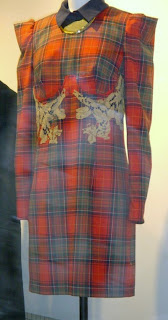 I love plaid.  I love lace.  I apparently love plaid dresses appliqued with lace, even in somewhat odd places for applique.  And I wish I could have gotten a better angle so I could see what was up with those sleeves!

The black and gray outfit on the left didn't do as much for me, but it was YSL's store window, and I was in Paris, and isn't every sewist worth her thread supposed to stop and genuflect in front of YSL's store window?  There was a Christian Lacroix store right down the street, under construction.  If his windows had been filled with clothes, there would have been kneeling in worship involved.  And possibly drool on my chin. 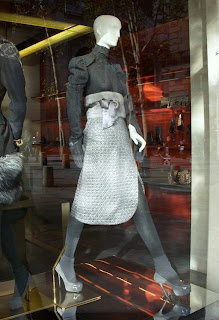 The next dress just attracted me because of the colors, the print, the overall . . . something of it.  So many of the pieces I fall for are for the fabrics, rather than the cut; it's a weakness of mine, and one I had pointed out recently watching the lame finale of this lame season of Project Runway.  A beautiful print does not make for a great dress, nor does knowing how to use a beautiful print make for a great designer.  I need to learn to work with more solids.

The last photo, the coat, was taken at L'Orangerie, while ostensibly looking at Monet's waterlilies.  And I was looking at them, I just walked in behind this woman and her coat kept distracting me, so I finally got a photo of it while (ostensibly) taking a photo of the waterlilies. 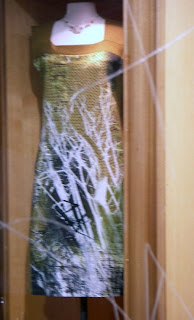 Another thing that really gets me is patchwork or working with multiple prints.  I remember a few pieces like this coat from Florence 2 years ago.  Apparently the trend either hasn't gone away or she's taken very good care of this coat.
You can't tell too well from the photo, but most of the coat is made up from multiple layers of multiple fabrics.  The large face on the upper back had a layer of black net or gauze over it; several of the lower pieces, in black, were overlaid with layers of black lace.  It didn't change the color much, obviously, but it added a lot of depth to the coat while walking behind it and mentally taking notes. 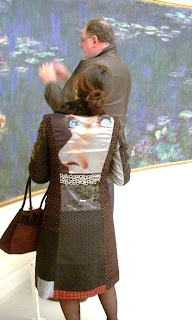 So these are my fashion highlights.  I wish there were more, but I was actually trying not to take as many photos this trip.  We've been several times now, so I don't need to take photos of the major sights anymore, and I get a little tired of trying not to look like I'm stalking someone who's wearing something that interests me.

Of course, when we were walking along the Seine and there was a woman several yards in front of us, wearing an absolutely phenomenal skirt made of at least 4 coordinating fabrics with bias-cut ruffles in leopard print, my camera battery crapped out and I missed her entirely.

It snowed on Saturday, shooting my weekend plans somewhat in the foot, so I finally renewed my acquaintance with my sewing machine.  The plaid jacket is still under construction; I decided to ease my way back in with something simple, and made myself a pair of annoyingly loud striped pajamas because it's cold in the house and I refuse to turn the heat on this early in the season.  Thanksgiving is my usual start date - something to be thankful for, is how I think of it.  In the meantime, a little cold builds character.  And justifies the construction of fuzzy new pajamas.
Posted by Karen at 8:31 PM

Wow ~ about the heat thing! Between the 6" of snow and the freezing temps, I went with heat. But what's really freaky is that it's going to be around 60 degrees on Tuesday and Wednesday.

Btw, thanks for your note!

Thank-you for a peek at "the latest from Paris". It was a real treat!

I love the coat, but that first dress sent me spinning. I'm using it for inspiration!

The sleeves on the fantastic plaid dress remind me of a more extreme version of the darted sleeve caps of Burda 9574.
http://badmomgoodmom.blogspot.com/2011/10/kcwc.html

It was fun to make, but a definite headscratcher when I first looked at the pattern piece. Perhaps you can draft your own?

BTW, I bought the fabric b/c it said Los Angeles on it, but my daughter likes it because it says Paris on it.

Great post! Loved all the fashion pics and your take.

What a great trip to Paris! That color block dress is fantastic! I can't wait to see your rendition of it. Is is made of a double knit or a woven?

I don't know that I could pull it off, but I lurves the second dress. It needs to be behind glass in my house. It still needs glass to protect it from drool.

Great to hear about your trip!

Hey, just in case you are wondering, I believe the coat in front of the waterlilies to be a Desigual design. Desigual is a spanish label that is all about combining wild prints in all of their clothing.