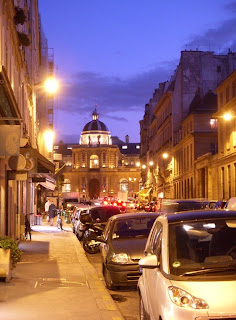 Do you ever feel, when you walk through the automatic doors at the airport, that you're entering someplace akin to the Twilight Zone?  A place where time as you know it has no meaning, where things are going to occur in their own time - airport time - and you have no choice but to surrender and go with the flow, wherever you're bound, and hope that you get there?

That's me with airports, anyway.  This trip included, though it could have been worse.  I have to thank several very nice blonde ladies who work for Delta Airlines for making the experience as tolerable as it was.

We left for the airport on time, even though we discovered that the flight would be delayed. What if it got undelayed and we weren't there?  Trying to print our boarding passes at the kiosk, we got a message that there was a problem and to go to the desk to talk to a real, live human. 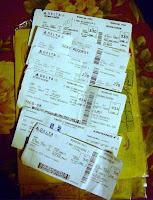 Our flight, it turned out, had been canceled and we were being re-routed through Atlanta. We get our new boarding passes and find the gate.  There's an Atlanta flight leaving in an hour on the board, but it's not the flight number on our passes.  I ask the nice blonde lady, and she says there are 2 flights to Atlanta, both delayed, and we're on the second one.  Which might or might not connect with the Paris flight. 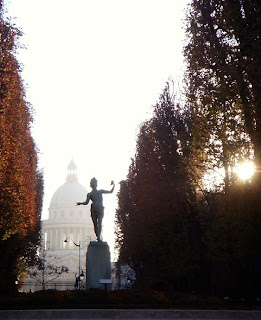 WTF?  I take a deep breath and do not scream.  Instead, I tear up.  "We're on our honeymoon," I said.  "We can't spend the night in an airport."  She puts us on standby for the first flight, but says not to get my hopes up.

An hour later, when they start boarding, I hear my name called.  There were 3 standby seats on the flight, and we got 2 of them.  I resist hugging the nice blonde lady, especially when she says that there's no way  the people on the second flight will make it to Paris - and because it's a weather delay, the airline isn't responsible for putting them up at a hotel.

We fly to Atlanta, seated separately, and another nice blonde Delta lady stows our bags in the staff area because after we get on the plane they ran out of overhead space.  I chat all the way there with the woman seated beside me, who sews, grows her own vegetables and is dying to get chickens.  My people are everywhere, I tell you.

Atlanta's airport makes Philadelphia International look tired and shabby.  Which it is.  We get yet another pair of boarding passes (keeping count?) because our seats need to be changed from the ones we got in Philly.  Since the second plane wouldn't get in on time, we were going to have to spread out on the plane to balance the load - we were flying at 1/3 full! 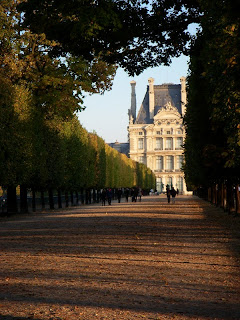 All this led to us getting into Paris about 3 hours later than expected, but considering the alternative - a night in the Atlanta airport - 3 hours was fine by me.  We checked into our hotel on the edge of the Jardin de Luxembourg, and meandered around the neighborhood before going off in search of food.  We ended up on the Quai des Augustins, along the river, at the Bistro des Augustins, having several glasses of wine and a creamy, cheesy gratin and a basket of bread.

What airport?  What frustration?  Give me wine and sufficient dairy products and I can forget almost anything.

And a little Tina Turner. When we got to the bistro, it was around 3:00 p.m. - the wasteland between lunch and dinnertime. There were no other customers, just the waiter and a few friends hanging at the bar. American music is all over Paris, and they had some good stuff going on. The highlight: when the really fast version of  Proud Mary came on, and all 3 men, very French, very white and very skinny, started dancing at the bar like Tina in her fringed dress and singing along, very loudly, to boot. None of them actually spoke English but they knew all the words.  I couldn't help but applaud. 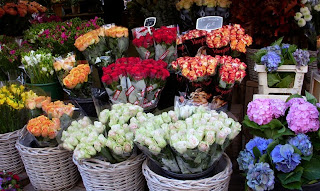 We kept going for a while, but our policy on vacation is to try to put ourselves into the local time zone as soon as possible, go until we can't and then fall down.

Much more to come - obviously - including highlights of the clothes, the amazing food markets and our trip to the Orangerie to be surrounded by more Monet water lilies than I thought humanly possible.
Posted by Karen at 8:39 PM

You always make me laugh! I LOVE Paris. Much further away for us in the antipodes but 3 or 4 times I have been were part of big backpacking trips. I have envy!

Even with all the rerouting, it sounds as if you did have a wonderful time. Your pictures are beautiful. I am green.

I can't wait to hear it all! Thank you for making me laugh this morning.

Not only are we (the sewing, growing stuff and egg-collecting kind) everywhere. I just heard on the radio, that we are super trendy!

Ooh lala! What a travel adventure!