Or maybe it's about the food 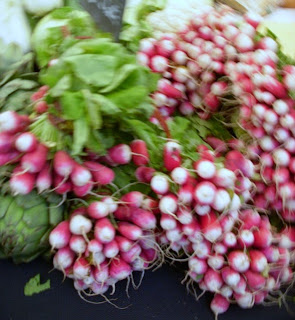 Okay, so maybe it's not ALL about the food, but for me, in Paris, it's close.

We've been 3 times now, and it's always like that. In 2007, for our first trip, we dumb-lucked into 2 fantastic restaurants that we've returned to on each trip. More on that as we go along here.

Friday morning, we woke up pretty well rested from our jet lag. We each had something we wanted to do in Montmartre - I, of course, had to make a pilgrimage to Reine and stroke the expensive fabrics, and Mario, a big comic art/graphic novel fan, had 2 galleries he wanted to visit that specialized in his favorite thing. We went first to the fabric district, where my feelings were hurt by the drastic price increases (though I did buy 2 pieces of fabric at one of the remnant or "coupon" stores). Then we had a lovely lunch at a restaurant recommended by a friend, and then we walked to the galleries. 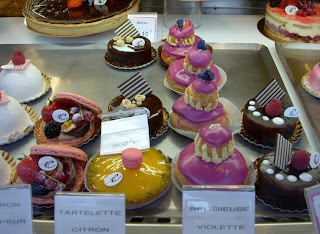 We had ourselves a well deserved rest after our hike, then meandered out in the evening back to our first favorite restaurant, Au Chien qui Fume (the Smoking Dog). I had salmon quenelles in a shellfish sauce, rabbit with mustard and a potato gratin, and a glazed apple tart with vanilla sauce and fresh whipped cream. And wine, of course.

Most of the photos here are from various street markets we encountered during our wanderings around the city. It seems like we found one every day, and it really began to make me crazy that I was trapped in a city with all this glorious food and no kitchen to cook it in. A basket of fresh porcini mushrooms is enough to make me twitch, but unlike when we went to Florence, I couldn't find any dried ones at the markets to bring home. Waaaah.

On Saturday, we got up extra early to go to the flea market near the Porte de Vanves metro stop. The weather forecast had been for days in the mid-60s, nights in the mid-40s, but that Saturday it wasn't anywhere near mid-40. Even layered up, we were cold and miserable. And the price increases had struck the flea market as well, so we were cold, miserable, and thwarted by the European financial crisis. Vintage buttons for 5 euro apiece?? Really?? Who's buying them? 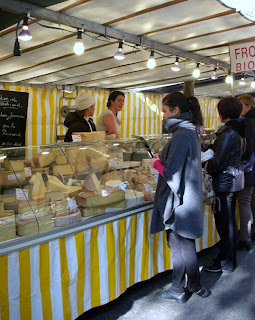 We stopped at a vendor cart had double espressos and crepes to warm up. It worked for a little while, but my happiest moment at the market was finding a woman who was selling scarves for 3 euro. We each bought one, and felt much better. Though I have to say I feel a little like a Jane Austen heroine - I took a chill, and spent the rest of the week, the flight home and the week after, coughing like a consumptive.

Saturday night we went to dinner at a seafood restaurant that called to us. I had fish soup with a spicy rouille and croutons, and a bucket of mussels. And I mean a bucket. They had to bring me a second bowl for all the shells, it was ridiculous. Mario finished his skate and helped me down the last of the mussels because I was running out of room. Though I did have room for the 3 scoop sorbet/glace dessert - flavors were yogurt (yogurt-flavored ice cream.  Really), blood orange and lavender. Sounds strange, but yum!

Sunday was the day that didn't work properly. We tried to go to the Beauborg, and the lines were over an hour long by 9:00 a.m. We decided we didn't want to see their art that badly when there's so much more to be had. We walked up to Les Halles, to get in from the chill at the galleries and shopping area there, and found most of it under renovation. There is apparently no shortage of construction work in Paris; many, many buildings were surrounded by green construction barricades. 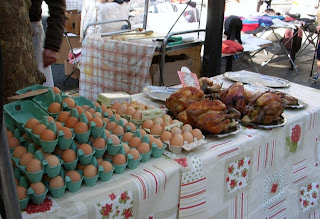 We walked back through the Marais, picked up lunch, and then went to the Musee de Mode du Textiles (the fashion museum attached to the Louvre). Their main exhibit was Hussein Chalayan. I wasn't thrilled - for me, sometimes when a designer has too many points he's trying to make (political or whatever they may be), the fashion gets lost. Mario thought he did great installations, but he wouldn't have known it was a fashion exhibit if I hadn't said so.

By this time, it was later in the afternoon and we were starting to fade a little. But since we were already halfway down Rue de Rivoli, Mario suggested we walk the rest of the way down and go to L'Orangerie, to see their collection of Monet's waterlilies. Since I dragged him through the Cluny Museum on Friday morning to visit the Unicorn tapestries, I thought that was only fair. And it's not like I didn't want to see them; I was just flagging a bit.

Great art has restorative powers, however. Once we got inside the museum and into the stark white oval rooms wrapped in waterlilies (has anybody seen Midnight in Paris?) I forgot that my feet hurt and I wanted my pre-dinner nap. We circled around looking at paintings until they kicked us out at 6:00, and then we went back to put our feet up for a while. 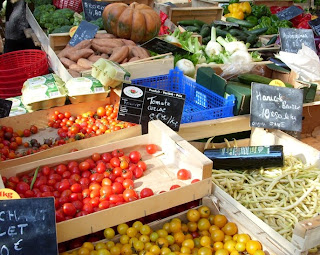 We tried to go to Allard, our other favorite restaurant, but by the time we got there at 8:30 (okay, we put our feet up for QUITE a while), they were packed. Happy hour in Paris is from 7:00 to 9:00, not the American 5:00 - 7:00, so they were really just getting started. We made a reservation for Monday night, our last night, and walked back up the block and found a perfectly acceptable backup restaurant. By that point we were both wolfishly hungry and Allard's spectacular dinner might have been wasted on us anyway.

On our last day, we really had no specific plans. We walked a lot that day. The weather had warmed up and we just wanted to spend the last day looking at the city.

We realized over lunch that we'd bought no gifts, so we stopped at a shop and bought macarons for family and friends. They were supposed to be refrigerated, but we thought between spending the night out on the cool balcony and then being on the plane, they'd survive (and they mostly did, only a little bit squashed - and they still tasted good).

After bringing our macarons back to the hotel, we rested and then walked back to Allard for dinner. Last meal in Paris: pate de maison, cassoulet and a chocolate charlotte that was absolutely obscenely good. Mario had escargot, boeuf bourguignon and the chocolate charlotte. We split a bottle of burgundy and drifted back to the hotel in a happy haze of wine and way too much good food.

And that, dear readers, was our trip to Paris. I'll post separate photos from the Orangerie; the waterlilies really do need to be seen to be believed - there's something about the scale and the size of those rooms, built to accommodate them, that made them even more impressive than I'd expected.
Posted by Karen at 5:50 PM

Life is so unfair. I want to go back. I would absolutely live there again if I could.

Sounds like you had a blast! My husband and I have never been but this makes me really want to go!

Oooh la la, love your report! I've taken some notes from your posting for my trip to Paris next May.

Swoon. I've yet to make the trip. Sounds like you had a wonderful honeymoon!

Karen, I am so happy to see that you keep going back to Paris and even better that you and and dear hubby had a great time. I absolutely love the shops in Marais and go back once every year. I do hope you are feeling better.

Thank you for the "tour". The last time I was in Paris, it was gogogogogogo with a husband and 5 teenage daughters- I didn't get to see any fabric stores!
xo
c