Making a production of it 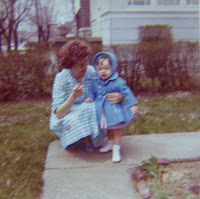 We all know one of those people, the ones who can take the simplest task and turn it into an epic saga. Admit it, you know one. Or two.

My mom could be like that, but only with regard to certain things. Sewing was one of those things.

From what little I ever saw, she knew how to sew. But it never grabbed her; it was just something she could do, and when she had no other choice, she did it. She made her maternity clothes when she was pregnant with me, because they didn't have money, but she bought (or was gifted) all my baby clothes.

Every once in a while she would decide to sew something, and then she would have to get the machine out. That shouldn't be difficult. Even those of us without a dedicated sewing space have the machine parked somewhere close by, waiting, where you can reach out and pet it occasionally.

Mom, on the other hand, kept her machine put away. On a shelf, in a closet. This was an early 1960s metal Kenmore, in a heavy case. It had to be taken down by a man, because not only could Mom not swing it down from the shelf on her own, she couldn't even reach the shelf without standing on a chair. And by the time my dad got home, or one of the neighbors' husbands could be borrowed, she'd lost interest in whatever the project was to begin with. 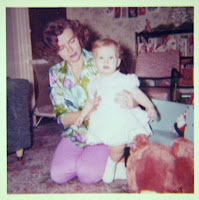 Once the machine was down, it only got worse.  I learned how to thread it for her by following the the diagram in the instruction manual. It was easier than watching Mom fight with it - or listening to her swear at it (though that gave me a pretty extensive vocabulary for a 6 year old).

By the time I reached high school, the machine had moved. It still lived in a closet, but it lived in my closet, on the floor, where I could drag it out nightly and sew like a madwoman during the commercial breaks in my stepdad's marathon TV watching.

When I moved out at 18, the Kenmore stayed behind. It went back up onto its shelf in my mom's closet. She didn't love it, but she wasn't ready to give it up. And I spent one of my first paychecks on a sewing machine I could not only lift, but could leave on the kitchen table 24/7.

My mom died 5 years ago. When I went home to clear out her stuff, I fully expected to see the Kenmore up on the highest shelf of the closet, poised and waiting to fall on me. I even planned to take it home, for sentimental reasons, and swear at it every so often in her honor. But it was gone. When questioned, my stepfather said he sold it at a yard sale. He could no longer take it down from the shelf, and since there seemed to be nowhere else it could live, at least according to my mother, he let it go for $5 to someone who actually wanted to use it.

I think he got it right. If you don't love your sewing machine, set it free.
Posted by Karen at 1:26 PM

That's a great story. Thanks for posting.

A sweet story, or maybe bittersweet is a better word. My mother had a lovely Singer in a stand-alone cabinet. It lived in the hallway upstairs, ready to be used. She had mending for her family of six children piled from the floor to the level of the top of the cabinet. Stayed there for months. Even my husband remembers seeing that pile!

Great story. Like your mom, mine only sewed when she had to. She recently gave me her old sewing machine as she doesn't sew anymore. It's the machine I learned to sew on in the early 1970's. For sentimental reasons, I was glad to get it, but it sews great too.

Karen, I really enjoyed your story! I also had a 'well developed vocabulary' at an early age, lol.

That was a lovely story, but are you sad you don't have it? g

Your mother sounds a lot like me. But when my children finally left home and I had a spare room I was able to put that heavy thing out permanently and was able to sew when I felt like it instead of when I had to. With the machine readily available I felt like it more and more often and finally invested in a modern computerised machine. Then I discovered the internet and the lovely inspirational blogs. Now you can't stop me!! Loved your story, thank you.

Thank you for sharing your story, Karen. Sewing was both hobby and necessity for my mom, and many of my childhood memories involve seeing her at her machine. She has a new machine now, as her old one burned in a fire, and still sews when the mood grabs her.

Thank you, Karen. I really enjoyed that!

Love the story! My mom loved to sew, and always had her machine out. She didn't get her own sewing room until all the kids moved out; before that it was always in her bedroom. I remember the swearing, too....