Listening to the Fabric

I'm playing with muslin tonight, trying out a first draft of the 1912 slip pattern, and I'm beginning to make myself cross-eyed, so I thought I'd post here a review I just put up on Patternreview.  Fairly un-Edwardian, but other than that, quite nice.

Pattern Description: High side slits and wide bands on the bateau neckline give this simple t-shirt a trendy appeal. (Burda calls it a t-shirt in 2 of the 3 descriptions, but the third version, pictured here, is done in satin and there's no mention of t-shirt. Heck, the model even forgot to put on the rest of her clothes).

Did it look like the photo/drawing on the pattern envelope once you were done sewing with it? More like the line drawing, since Burda contorts their models to the point where you miss most of the garment details.  (Except for the bad airbrushing on this photo - I noticed that detail.  Catch how the gold band on her near sleeve doesn't go all the way to the edges?  And on the other sleeve, the gold is on the inside.  Nice touch, Burda).

Were the instructions easy to follow? It's a very simple top, and I disregarded the instructions because I was afraid Burda would confuse me and make the whole project a lot more complicated.

What did you particularly like or dislike about the pattern? When I first saw the magazine, this was one of the patterns that didn't get me, but when I looked at the line drawings, it jumped out and said that it wanted to be made. In this particular fabric. I'm not a big tunic top wearer, but you have to listen to the fabric, right? 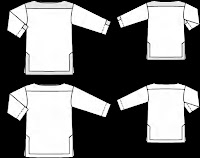 Pattern alterations or any design changes you made: None, surprisingly.

The pattern went together easily enough. I'm not sure how Burda wanted me to apply the bands, but I wanted a clean edge so I sewed them right side to wrong side, then flipped them and topstitched them very narrowly along the inner edges. I didn't want visble stitching along the edges, especially using the satin. And satin it apparently had to be -I was originally going to use a remnant of black knit, but after I cut it out I couldn't do it. The picture in my head said the contrast fabric had to have a shine.

If I do this again (and I'm not sure I will; while the top looks nice and I got a number of compliments on it, I'm not sure it's me) I'll bring the neckline in a bit. As drafted it goes nearly to the shoulder and would show bra straps. From the wide neckline, the shoulder yoke is dropped over the upper arm. Beyond that, it's actually pretty flattering for a tunic - or maybe I should just re-evaluate how I think I look in them. I always think I look wider in something that doesn't have a defined waist, but since I don't really have a defined waist, maybe I'm wrong.

Would you sew it again? Would you recommend it to others? As I said, I'm not sure I'll sew it again, but that's a personal style issue, not a criticism of the pattern. I'd recommend it - it's a nice pattern, goes together well, and the only time-consuming bit was stitching and pressing the contrast bands. The shape is good and the straight neckline is actually a nice change (though you might want to check the width before sewing).

Conclusion: It never hurts to sew outside your style comfort zone, just to see if you like it after all. And in the case of this top, if I change my mind, I have 2 co-workers who offered to take it off my hands.
Posted by Karen at 11:43 PM

Good catch on the air-brushing! I was surprised when I saw your top. I thought, "That looks like something I would sew, not Karen!" So, of course I like it. : )

That's a pattern i would never give a second sight by myself. But you made such a beautiful tunic that i have to rethink that. Very nice!

Your top looks great and one I would not have looked at twice in the magazine, I can see why you received compliments. Great job.

I love the tunic! At first glance, I thought that Burda had goofed with the airbrush but then I looked at the line drawings and there is a little inset piece on the sleeve edge. It's weird but it is supposed to be like that.

Well, it's nice to have such helpful co-workers, isn't it? It's nice that you tried something out of your norm, even if you don't love it.

I like your mixed materials--nice choices. I thought the neckline looked out of control wide in the magazine, glad to have that confirmed.