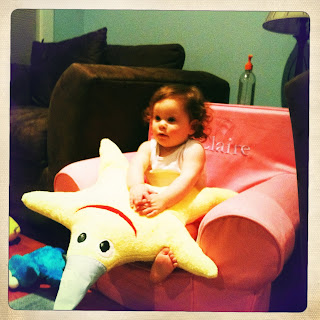 Which should be subtitled "from the sublime to the ridiculous."

And I'm not saying which of my major February projects is which.

The photo above is my friends' little girl, recipient of various cute dresses.  For Christmas, her mother asked if I could make her a Star Doll.  A what?

So I say yes, but it won't be in time for Christmas, because of craft show obligations, etc.  So I'm not sure what happened in January to make it not happen, but last weekend I realized that it was almost the end of February, the poor kid didn't have her toy yet, and I was about to step into a Titanic lifeboat with a bagload of lace, so I'd better get cracking.

It took me two hours, a yellow bath towel, some red fleece leftover from the sleep sack I made when she was much smaller, and a few other remnants.  Two hours, for two months' procrastination.  That's about right.

On the other end of the scale is the completed princess slip for the 1912 project. I can't believe I made this thing.  Even though it's ridiculously girly (and I am not), and even though it contains more pink than I've worn in the past several years, I love it.

Also produced last month were the BWOF 2/12 tunic and an undocumented BWOF 6/09 batwing top (which I stole from Elizabeth).  Both nice projects but I'm not excited about either.  There were minor issues with the batwing top that I want to fix and then I'll post photos and a review.  The tunic . . . I just feel "meh" about that.
Posted by Karen at 10:25 PM

I just love the star doll! So, apparently, does its new owner--so cute!

What happened with my beloved batwing top????

Are you still available to make star!?