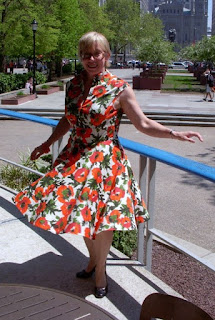 Sorry for the cryptic title; it's in honor of Kashi at Metro Textiles, who after he tried to tell me that these weren't poppies all over the fabric (I think poppies have some kind of negative drug connotations to him), then acknowledged they were and told me -- and I don't know if this is true, but it made for a good fabric story -- that Afghan poppy farmers receive their money from the drug lords before planting season, and then hope for the best.  When the crop is harvested, if he doesn't have enough to pay back his advance money, he has to hand over one of his daughters.

I said that was horrible, and Kashi just spread his hands.  "They have a lot of daughters," he said, "but it's not good."

This has nothing at all to do with my fabric other than this story is going to be permanently stuck in my head whenever I wear this dress, so I've named it in honor of all those Afghan farmers' daughters, who, even if they were allowed to stay with dear old dad on the poppy farm, would never get to wear this dress.

The patternreview is here.  I love this dress way more than I expected to - I've had this pattern (V8633) since it came out, and wondered a few times since why I bought it.  At the time I remember liking the version with the straight skirt; when I started on it this time, it was the big skirt all the way.

Apparently some patterns, like fabrics, need to marinate in stash for a while until they're ready.

I took my time on this one.  There's quite a bit of hand sewing inside the bodice, and because it's a circle skirt, I hemmed it by hand so I would have more control of the curve.  I don't know as I needed to do that much, but after working on the 1912 Project patterns for a while, I'm beginning to appreciate the meditative aspect of some hand sewing.

Which is good, because the hem is the only meditative thing about this dress.  I think the loudness of my dress was the only thing keeping me awake this morning after my non-drowsy allergy meds kicked in.
Posted by Karen at 11:32 PM

One word. Gor geous! Ok that was two words.

How pretty. You look like you really enjoy this dress.
I love hand sewing too. I just have to give myself more time and incentive to 'get in the hand-sewing groove'.

Got to love that Kashi! Gorgeous dress Karen!

I love this dress--material is perfect!

What a great dress! It's perfect for today.

The poppy story sounds kind of like some kind of a fable.

Karen, it's beautiful and perfect for the wonderful summer like weather that we had yesterday!

I love poppies, and that's a beautiful dress.

PBS had a program called "Opium Brides," and it's not a fable.

That fabric is great, but the story is sad. What an interesting tale to share when buying and selling fabric.

So adorable! I just love that dress and the neckline is really flattering for you. Kashi--he always has something to say!