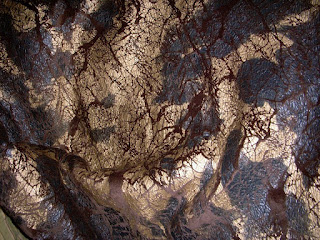 I can't talk about a PR Weekend without talking about fabric.  It's as essential as the friendships that are made and the friends who are re-encountered year after year, having aged not a bit, but whose wardrobes have expanded exponentially.

Since I had just been to NYC recently (remember the trip with Mario, when I wasn't going to buy any fabric and Kashi basically knocked me over the head and when I woke up there was a UPS box on my doorstep full of goodies?), I didn't plan on buying much.

Except for a few specific things. 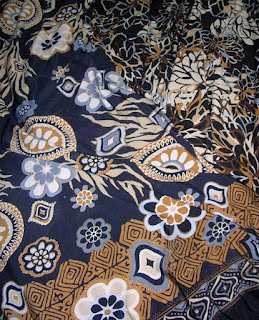 Also, at Secretary's Day or Administrative Professionals Day or whatever PC term we want to use these days for throwing a gift at the person who cleans up your messes all year long, Andrea convinced my lawyers to chip in for a gift certificate to Metro Textiles.  I'm only sorry I couldn't convince her bosses to do something that imaginative.

So I had other people's money to spend.  And on Friday, I chose to start out - where else - at Metro Textiles because I wanted to hit up Kashi while he was fresh and before the store turned into a total trash heap.  There were about 10 of us there right after he opened, and I think we did him proud.  I know I did. 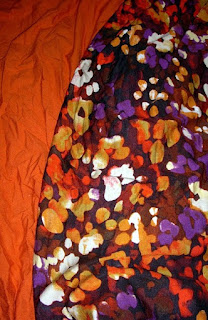 I got 7 fabrics from Kashi, most of them 2 yard cuts.  The prize, at least to me, is the fabric at the top right.  The underside is fleecy, but the top feels almost like a close-cropped fake fur, and the leather texture is printed.  It's soft and cuddly and drapy and strange.  I love it.  It was the most expensive piece, and it's going to take up a crapload of space in the workroom, so I'd better decide what jacket it wants to be soon.

Other than that, I went knit happy, as I always do at Metro.  The second photo, left, is two knits, different prints but exactly the same colors.  I couldn't resist, and I'd love to find a way to mix the two that wouldn't make people dizzy.

Third, my loud purchase of the weekend.  I loved the orange/brown tones of the print, but the solid was the perfect contrast orange, so I had to have that as well.  I also had to have the wonderful faux tie-dye stripe, if that's what you call it.  Blues and greens and browns and ivory.  Mine.  Lastly, I got two yards of a black cable sweater knit, and four yards of a wonderful soft heathered gray knit that I intend to use for around-the-house clothes.  (My lounging clothes are just . . . beyond awful.  My flannels have lost their fluff, my sweatshirts have holes, and face it, sometimes I'd like to still look decent when I'm at home). 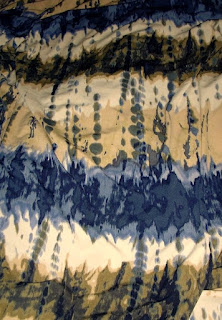 From there, we went to Mood, where Meg was a very gracious hostess and turned us loose on the store like a bunch of ravening wolves.  Having money to spend, do you know I wandered that entire store - three floors - and couldn't find something I wanted.  Or something I wanted enough to make me turn away from the other fabrics I considered.  Finally I went downstairs to their lowest level, where the leathers live, picked out a gorgeous supple olive green lambskin, and plunked the roll on the table. The Mood guy asked how many skins I wanted, and I said, "$125 worth."  Except then I saw the Persian lamb and had to have one of the honey-colored skins for a collar, so I scaled back on the green.  There's enough of it, that's all I care about.  And it's a less "sticky" color than pictured; it didn't photograph well with the flash.

After Mood, we broke for lunch.  After hitting Metro and Mood that quickly, and that hard, it's a wonder we weren't broken.  But after a restorative glass of wine and some fish and chips, we were off again. 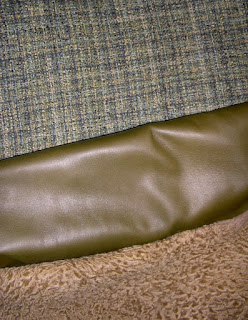 I've lost track of the order here, but I know we hit up Pacific Trims, my favorite trim store in the Garment District.  I know there are others, and I've purchased from them, but there's something that keeps me coming back to Pacific.  But this time, all I got were two lengths of chain for two upcoming (eventually) jackets.

I haven't been to Paron's since they moved.  It's bizarre - it looks like they picked up the old store, gave it a good shake, changed the light bulbs and put it back down.  It doesn't have the narrow side Annex anymore, but there are a good selection of half price fabrics in the back  Of course I did not find a half price fabric.

One of the things I had been looking for at Mood was a moss or olive green boucle.  For yet another jacket.  At least count, I have three boucles which are still awaiting jackethood.  But I needed another.  And Mood didn't have the exact thing I pictured, which is how I ended up with leather.  Oh, the hardship. 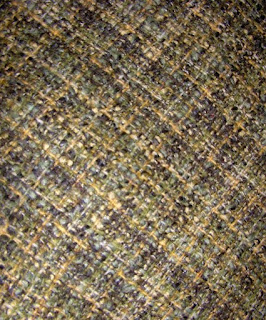 But Paron's, they had the exact stinking green fabric that I wanted at Mood.  I waffled.  I showed it to every PR woman in the store, and everyone, everyone, said I should buy it.

Isn't it nice when your friends validate the choice you've already made?  So I bought 2 yards.  And in real light, without camera flash, it's beautiful with the Mood leather.  If I wore leather skirts, I would step back from the green leather jacket idea and make a leather skirt.  I'm still vaguely considering it; I just need to find a "me" skirt that would look good in leather.

Which means both boucle and leather will go into the stash, to marinate for however long it will take.  Maybe I'll take down one of those other boucles; I can hear them talking up there, on the high shelf.  They're plotting an avalanche, and I'm afraid the new one will just jump right in and help them.

So that's PR Weekend fabric.  There will be a full Weekend recap, but my camera died as soon as I walked into the workshops on Saturday, so I'm still waiting on a few photos from others, and I'm still digesting some of what I heard that day .

Moral of the story: if you have the opportunity to attend a PR Weekend, be it in your area or across the country, DO IT.  You'll get so much more from it than it could ever cost.
Posted by Karen at 10:23 PM

What a fantastic haul! These are going to make some great garments.

Wow, those are really pretty. Can't wait to see the finished garments.

Ooooh, great haul. You know how I feel about a knit print and everyone steered you right when they made you get the boucle. And you really have to make that leather into a skirt now that you've brought it up. You will wear the hell out of a leather skirt.

Wow you got some great gift certificates there! and great fabric!

I think you've gotta make a leather skirt. They will be STUNNING together.