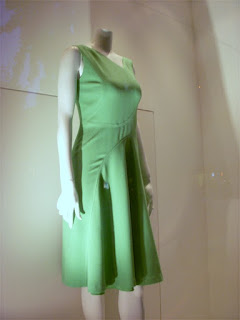 Mojo is still not present and accounted for.

I'm sewing, but it's just futzing with toddler dresses for the consignment shop.  Fun picking out fabric combinations but not "real" sewing (i.e., sewing for me).

But here are a couple of pretties from Patternreview Weekend.  Friday night after the Schiaparelli / Prada exhibit, after dinner, and after gelato, we passed the Carolina Herrera store. 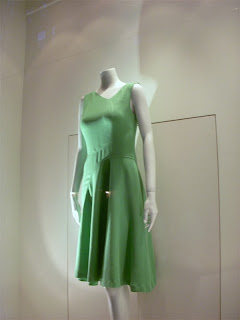 Andrea nearly passed out on the sidewalk from general Carolina-Herrera-Fabulousness, but this is the dress that really got me.

I could live without the color - it's a little too old school Crayola sea green for my tastes - but I love the piecing.  Think it would actually be very pretty in two colors, say black and tan or  maybe red and black.  The piece that wraps around the front and down over the hip is interesting, and it seems like a great color blocking opportunity.

But that's me.  Carolina Herrera is a little more understated, and that's what's great about her.

I am not Carolina Herrera, in case you haven't noticed. 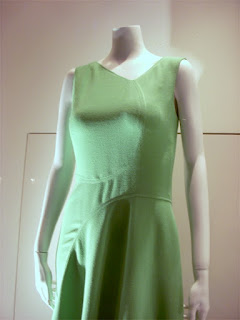 Odd weekend.  Went to a street festival on Friday night.  Good food, great music, catching up with a bunch of people I used to work with, way back in the mists of time.

Not surprisingly, the mists have aged them considerably.  It was surprising how much older they looked, and it wasn't until I was on the way home that I wondered what they thought when they saw me.

Off to stare at more fabric and not think about that any more.
Posted by Karen at 7:51 PM

No wonder you were fascinated by the piecing. So am I.
I can, however, see you wear this style.

I can see the pieced one with a bold print and a solid coordinated block. Hope you get your mojo back soon.

Oh I hope the mojo returns. When you find it - will you tell mine to return home as well? I'm sure they are off playing together. g