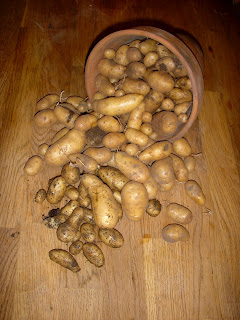 I got ambitious this year and planted 2 kinds of potatoes, Russian banana fingerling and Yukon Gold.  They came up well, grew and kept growing.  I had hopes.  High ones.

Then some neighborhood kids climbed my fence to trample my yard on their way to stealing something from the yard on the other side of mine.  By the time they grabbed my neighbors' go-kart and dragged it back through my yard, the fingerling bed was trashed.

I tried to tie the plants back up, but most of them were flattened and snapped off at the dirt.  You don't even need to know the language that floated out over my garden, but all the other plants started growing in fear, in case it was directed to them.

After I (mostly) got over being pissed, I worked out what I wanted to plant next in that bed.  No point in letting it just stay like that, aggravating me every time I saw it.  Today I went out and started tearing up the dead potato plants.  And found potatoes.

Not a lot of them, but apparently the potatoes had set before the plants were broken off, so while there aren't as many as there would have been, and while they aren't as large as they could be, I got about 2 pounds of fingerling potatoes out of the yard, when I thought I was going to get nothing.  When I found the first one, I felt like a kid at Christmas.  I put it in a nearby flowerpot, thinking it was a fluke, and then I kept finding them.  Eventually the pot was full, and I grabbed another one.

Looking forward to tomorrow night's dinner.  Now, what to choose as the supporting actor to my glorious tiny potatoes?
Posted by Karen at 9:09 PM

That is soooo cool! Make something tasty and enjoy them!

so glad you got SOME! At first look at your photo, I thought the potatoes were tumbling from a bushel basket and wondered why you were so disappointed! Then I read on and realized they were tumbling from a clay pot! Everything's relative, eh? These will likely be the best potatoes you've ever tasted!

Next year try planting raspberries next to your fence. It even keeps the cats (mine) out of my garden. I tried potatos last year and was so surprised at what I got.

Maybe plant something electrified...to keep the darn kids out of the yard. :-)

Those potatoes will be a wonderful treat! We have an electric fence around our garden and rose bed. It takes care of kids, racoons, and various other critters.