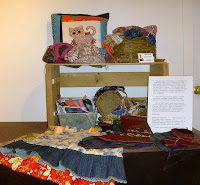 So when I left work last Thursday, I had 44 pieces finished and waiting for the craft show.

I had off Friday.

When I went back to work Monday morning, there were  67 pieces finished and waiting to be priced and tagged and inventoried.  I got that done last night, and tonight, I set up my little corner of the gallery where the show will take place.  Being early has its privileges; I scored a table end, with a nice bit of wall overhead that will be taken advantage of before I'm done with it. 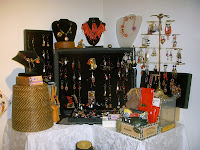 It was warm in Santa's little sweatshop this past weekend, yes it was.  But it was productive, as well.

I wish I didn't put this work off until the last minute, because I do enjoy making things, I just don't feel like working on those particular projects until I have to, and then I realize it's nearly too late and hey, I'm actually having fun with it and now it's almost over. 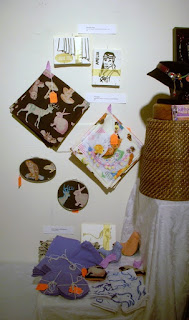 The continued challenge of working with recycled fabrics and remnants is trying to find enough of any one fabric, or finding several that coordinate (or fight nicely) to make up a specific piece.  Some of the most rewarding time spent in the workroom is laying out bits and pieces from various old projects or things I've pulled from the donation bag, walking down memory lane while piecing together something new.

Not all of the photos here are my stuff, obviously.  I'm only the top photo, and it only looks a little minimal because half my stuff is reserved for the second show on Saturday afternoon (which means I'll only look minimal at this show for the members-only opening night, which is usually lighter than public opening, on Saturday - and by then, I'll have added all the stuff that didn't sell on Saturday afternoon.  Unless - if the sewing gods are smiling - it all sells. 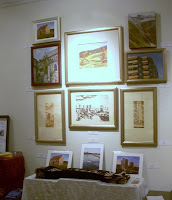 Fat chance.  It's the holiday season.  The sewing gods are snarky at the best of times.  At the holidays?  They're just like the rest of us: grumpy, possibly a bit hung over, a little sleep deprived, stressed and probably pissed at their co-worker sewing gods for being such godawful elves.

In non-craft show (and shopping) news, I somehow wandered onto the Style Arc pattern site the other evening and bought myself some patterns.  I'm still not sure how that happened, but if I'm going to pay hideous Australian shipping rates, I might as well justify them by buying a few patterns, right?  Dress, jacket and pants coming my way, along with a free top pattern.

To be sewn in January, when I have a brain again and the sewing gods have gone to the Bahamas, to recover.  I'll be recovering at home, with my stash and some new patterns.
Posted by Karen at 10:44 PM

Wow, that's a huge amount of inventory! I hope it all sells.

I hope you did well at the show!