Not a lot of sewing going on, though.  We've had a week of wicked cold, too cold to be in the workroom.  And after almost a month of avoidance, I've succumbed to the office cold and spent the last four days coughing, sneezing and feeling generally craptacular.  Today was in some respects the worst: a sick day at home where I actually felt too sick to do anything but read, talk to the cats and eventually get on the computer.

But things are looking up.  My cold is clearing, we're going to have a few warm days this week, and there are changes in the works.  Nothing I'm prepared to talk about yet, but good things, in small measure.

I hope you're all warm, productive and non-snuffling.
Posted by Karen at 5:54 PM 6 comments:

Making the most of what I have 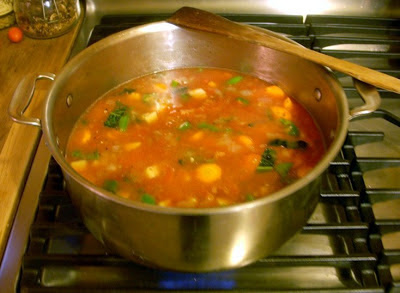 Well, that depends on your point of view.  I'm pretty pleased with this big pot of soup for the following reason - the ingredients, which consist of potatoes, carrots, kale, sorrel, garlic and green beans, all grown by me; onions and okra from the farmer's market; tomatoes - home grown and canned; chicken stock - made by me from a summer's worth of farmer's market bbq.  And barley, the only ingredient that came from the supermarket.

I still want more land to grow things (and keep critters on), but when I look at this relatively unspectacular pot of soup, I realize how much I've done with the small space that I have right now.

And that's the important thing about this pot of soup.  It shows me that while I haven't yet gotten to where I want to be, I'm not sitting on my hands waiting for things to happen.  If the most my urban farm will give me is the occasional pot of kickass vegetable soup and lots of fluffy omelets, then I'm going to enjoy them for all they're worth, and plot my next move on a full stomach.
Posted by Karen at 5:24 PM 7 comments: 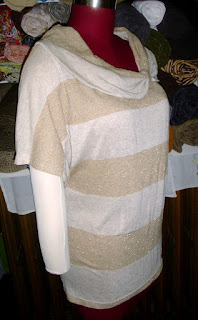 Sometimes there are limitations imposed on sewing projects - amounts of fabric versus what the pattern requires, sheerness or stretch or some other quality of fabric that changes your original idea.  These were two of those projects.

Both of these tops are made from the bones of New Look 6648.  When I say the bones, I mean all I used was the upper bodice portion, and then not exactly.  I saw a few versions of this top on Patternreview and thought they were cute, and picked up the pattern.  I tried making it for myself and the result ended up in Wadderville without even photographic evidence of its existence.  Suffice to say I'm glad it wasn't a fabric I was particularly fond of.

When it came to using this orange sweater knit, I remembered this pattern, which thankfully was still balled up under my sewing table.  For once I resisted the urge to recycle useless paper and left it there, perhaps because I had an inkling that it might not be useless after all?  Or maybe I was just lazy. 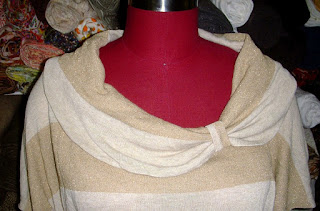 This orange sweater knit has a history.  I had several yards of it to begin with.  Then I tried to make a Vogue pattern (number unknown, but it was that Sandra Betzina knit top with the built-in shrug that everyone was making for a while a few years ago).  I hadn't been working with knits for that long, and I thought a knit was a knit was a knit.

Except when it's not.  This is a sweater knit, and it does have some give, but not what you would expect.  Certainly not what I expected.  The Sandra Betzina top was like a straitjacket, and went into the bin. The remnant went onto the shelf to taunt me.  Since orange is one of my favorite colors, it taunted me frequently. 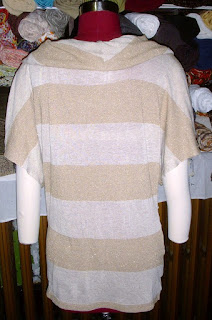 Enter the balled up NL pattern.  Sometime during my various days off and long weekends around the holidays, I decided to use just the upper bodice portion of the NL (lengthened), combined with this sweater knit, to make myself a tunic that I could either belt or leave loose.  I decided on the NL, despite our history, because the wide neck and cut-on sleeves seemed made for a fabric that had little give to give.

I wasn't paying a lot of attention when I started cutting, and realized that I had cut the back first.  Which wouldn't have been an issue except that what remained of the fabric were several large chunks, none of which were side enough to cut the front piece on the fold.  Grrrr.  So much for late night sewing.  I decided that I would cut a second back piece and do a CB seam.  It really isn't very visible because of the texture of the knit.  I debated deepening the neckline on first back (now front) piece, and decided to leave it alone, as more of a straight boat-neck.

Which would have worked except I forgot one important feature of the original top that didn't work.  The neckline is hugely wide.  So I now had a constructed sweater body that was so wide it sat beyond my bra straps.  I ended up taking some of the leftover fabric and constructing a separate neck piece, which turned the boat-neck into more of a funnel-neck that drapes a bit in the front.  Pressed and topstitched (also invisible in the knit), it actually makes a nice effect.  I took the easy way out for the finishing and just zigzagged all the hems.  The stitches fade right into the fabric and it keeps the knit flat. 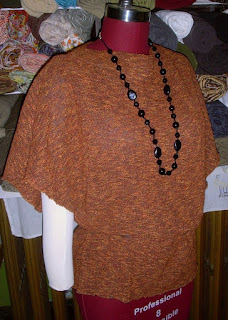 It looks rough, but it works well with the fabric.  And surprisingly, since I tend not to like to emphasize my lack of defined waist with a belt, I really like the top belted.  I wore it to a family gathering on New Year's Day with a black long-sleeve tee underneath, and it was warm and comfortable.

On a related note, we recently rejoined our local gym.  They were running a pre-New Year's special, and I've been meaning to go back.  But once we joined, Mario realized that his old sneakers were too old to exercise in, so off we went to the discount sneaker store.  Which happens to be next door to Jomar.  So he bought sneakers and I cruised the knit fabric remnants and came out with a few new pieces that I couldn't resist.  So much for austerity, right? 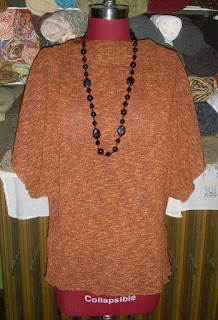 This gold striped fabric isn't something I would normally buy, but it really struck me on the table.  The limitation this time was that it was really narrow, and somewhat ravelly.  I decided to use the same NL top, with the sleeves shortened and the neck brought up.  This worked well, except even with the gold threads, the top seemed too plain.  So I adjusted the neck a bit and added the cowl from my favorite KwikSew cowl neck.  This then struck me as too drapy and saggy, so I made a tab that pulls the cowl up on one side and stitched it on.

It's a little cold yet to wear this one to work, but I'm looking forward to it.

Two tops, the same discarded pattern.  One fabric is at least 4 years old, the other less than 2 weeks.

You never know what's going to come out of the sewing machine when you sit down.
Posted by Karen at 11:51 PM 5 comments:

Teaching by the Seat of my Pants Remember a while back I talked about the embroidery class that wasn't?  Well, now apparently it is.

Two autumn semesters passed without a flicker of interest.  The first winter semester was announced, and the silence was deafening.  I posted a call on Facebook over the weekend because they said they were offering a 10% discount to see if they could muster up some people before giving up on the idea.

Until today.  I got a call at 4:30 p.m. to tell me that my first class was tonight.  In 2 hours, during which I still had to finish my work, get home, get changed, get supplies together (they didn't know if the students needed starter kits or were equipped, so better safe than sorry), find a couple of books with pictures for inspiration and to get the conversation started, a few finished projects and go over the notes that I had prepped back in the summer.

Of course my notes mentioned the handouts that I'd never gotten around to making, since the class kept getting canceled.  I got there tonight at 6:15 p.m., to find out that I had one whole student (the second one hadn't paid or shown up), and that they were making a special case for her since the class had been purchased as a gift by her daughter, a frequent student at the arts league.

I was hoping for a total beginner, but she's done some stitching before, and what she's really looking for are ornamental stitches that she can incorporate into her quilting projects.  Since I wasn't quite ready for that, tonight we did refresher basic stitches, talked a lot, compared our thoughts on sewing machines and wondered what was wrong with the mostly non-crafty rest of the world.

I'd say about 90% of the class was a total bluff on my part, but I think she only caught on to about 45%.  I'll be more prepared next week, and I told her to bring along a sample of her work to get an idea of what she really wants to do.

This could be interesting, frustrating, or both.  But either way, I went, I taught, I survived and I came home and drank wine.  It wasn't so bad after all.
Posted by Karen at 11:01 PM 7 comments:

We Have a Winner! 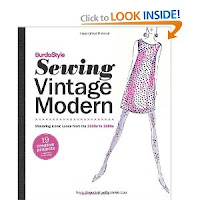 Kathy of Kathy Sews, come on down!  You're the winner of my copy of Burdastyle Sewing Vintage Modern.  Email me with your shipping address and I'll get your book right out to you.

Thanks much to everyone who entered; I wish I had a copy for each of you.
Posted by Karen at 11:47 PM 1 comment: