Teaching by the Seat of my Pants 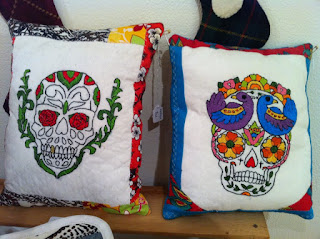 Remember a while back I talked about the embroidery class that wasn't?  Well, now apparently it is.

Two autumn semesters passed without a flicker of interest.  The first winter semester was announced, and the silence was deafening.  I posted a call on Facebook over the weekend because they said they were offering a 10% discount to see if they could muster up some people before giving up on the idea.

Until today.  I got a call at 4:30 p.m. to tell me that my first class was tonight.  In 2 hours, during which I still had to finish my work, get home, get changed, get supplies together (they didn't know if the students needed starter kits or were equipped, so better safe than sorry), find a couple of books with pictures for inspiration and to get the conversation started, a few finished projects and go over the notes that I had prepped back in the summer.

Of course my notes mentioned the handouts that I'd never gotten around to making, since the class kept getting canceled.  I got there tonight at 6:15 p.m., to find out that I had one whole student (the second one hadn't paid or shown up), and that they were making a special case for her since the class had been purchased as a gift by her daughter, a frequent student at the arts league.

I was hoping for a total beginner, but she's done some stitching before, and what she's really looking for are ornamental stitches that she can incorporate into her quilting projects.  Since I wasn't quite ready for that, tonight we did refresher basic stitches, talked a lot, compared our thoughts on sewing machines and wondered what was wrong with the mostly non-crafty rest of the world.

I'd say about 90% of the class was a total bluff on my part, but I think she only caught on to about 45%.  I'll be more prepared next week, and I told her to bring along a sample of her work to get an idea of what she really wants to do.

This could be interesting, frustrating, or both.  But either way, I went, I taught, I survived and I came home and drank wine.  It wasn't so bad after all.
Posted by Karen at 11:01 PM

Ooh, a class on embroidery with quilting! I'd sign up for it in my local area. Perhaps you will have to come visit me by the beach in LA for private lessons.

I once answered a flyer posted in the physics building at the U of CO for a new quilting group. We had 6-10 regular attendees, mostly from the math and physics departments.

One year, the wife of a visiting professor (on sabbatical) joined us. She was an embroiderer and a graduate of the Royal School of Needlework (or whatever the name of the school that made the recent royal wedding dress). Her embroidery rocked my world.

I'm serious about the invite. The UCLA Fowler museum of cultural history has the world's second largest collection of textile art, after the V&A museum. Museums, beaches and warm weather. All you need to do is give private lessons.

Congratulations Karen! All you need is one student!

Aw. I was so hoping to scroll down and find that you had 6 or 7...it reminds me of the saying, "Each one, teach one."

Oh that is just so unfair for you! That kind of cavalier treatment is the main reason why I quit teaching craft classes. It was just too stressful. I'd bust my a&& to prepare notes and materials packets for the estimated number of students (on my own dime) and get 2 people, one of whom would quit halfway through the first class. Or the class would be cancelled and they would "forget" to tell me until the last second. Or alternatively I'd have way more students than equipment to go around. You just can't pay me enough to play that game anymore. Perhaps you need to work out some better ground-rules for next time? If you're willing to try a next time!

You are brave and audacious to take on this kind of teaching. I'm so glad that you kept your sense of humor and enjoyed what you could accomplish. I tried this route a few years ago and was exhausted by the prep for such a small reward. But I did also enjoy the people interaction and I think that's a huge part of a class objective.

It sounds like you are a great teacher who is sensitive to students. I imagine your classes will grow.