Improvement, and Proof of Sewing 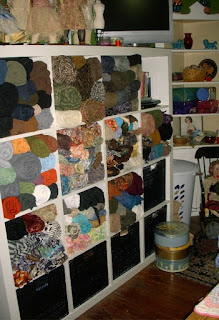 So, after outing myself last week as the uber-slob that I (frequently) am, I realized that something had to be done about it.

That something involved a trip to Ikea with Mario. Despite our trepidation, we came out of the store with exactly what we went in to buy (okay, plus a tiny little LED light for my desk, but that doesn't count, right?).

To the left here is my new Ikea Expedit shelving unit, complete with 5 bins to store all small stuff that used to be stuffed in totally-too-shallow drawers.  Interfacing (1 bin), lining (2 bins), leather (1 bin) and trim (1 bin - plus a bin under the table).

Even though I feel like I should have been able to organize the room without spending money, this was the easiest option - even putting it together only took an hour and a glass of wine.

And another one after to congratulate myself. 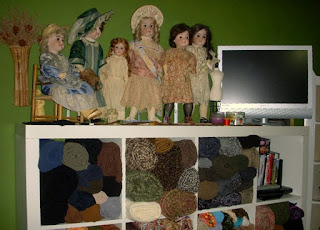 I'm not done yet, obviously.  The corner cabinet is still hosting way more rubble than necessary.

I wish I didn't feel the need to keep all my antique dolls, much less in plain sight, but I restored and costumed most of them and I like having the girls around.  They creep some people out, though, especially the one standing on the floor with no eyes. Even I think she's creepy, but I haven't found a new set of antique eyeballs for her yet. 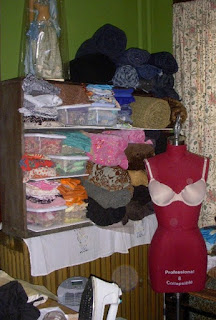 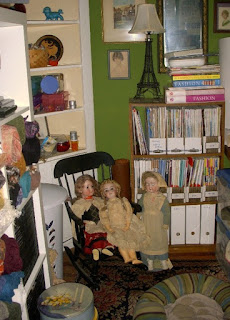 I also like having the TV and DVD player where I can really see it, both standing at the cutting table or sitting at the machine.  Before the TV was much smaller and sat straight ahead of my machine.  When we cleared out my aunt's apartment, I liberated her TV (which I had bought and not been paid back for anyway) and it's been sitting in the hallway for months waiting for me to get it upstairs.


The shelving on the radiator isn't completed yet either.  I did lose the second unit that was on top there, along with a small bookcase that used to be behind my sewing chair.  Now I can push my chair all the way back without getting hung up on a shelf full of Burda magazines.  They moved to the small bookshelf, and the cats lost the bed that used to live on the bottom shelf.  They have 2 other nesting spots in the room anyway, and one of them only sleeps behind the radiator to begin with. 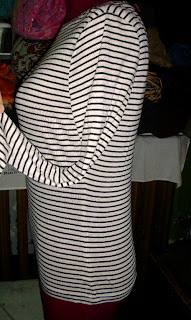 There's been sewing going on in my newly tidy space, but it's been mostly crafty stuff for an upcoming show that I'm hoping to get accepted into.  It's held spring and fall in our local Victorian cemetery, and I'd really love to do the spring show and be out there among all the flowering trees.  It would almost make up for not really enjoying the "dealing with the public" part of the show.  You know, the public . . . those people who want to know why your stuff costs so much more than what they buy at Walmart.

Today I decided to make something for myself, just to prove that I still can.  This is BWOF 2/09 #109, the boatneck tee.  I made this before, when the pattern came out, but didn't like the way the neckline turned out.  I think Burda wanted you to simply fold it under and stitch.  I don't  remember, and I didn't bother to look at the instructions this time.

I've always loved black and white striped tees - that whole French sailor vibe.  I've never had one, mainly because I think I have a bit too much boobage to actually successfully wear one. 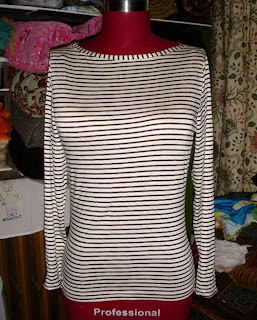 Nonetheless, that's what I made.  I bought the striped knit at a recent trip to Jomar - knit remnants were $2 per  yard.  I like it on, but we'll have to see how I feel about it with a pair of pants and potentially wearing it to work. If I put it on tomorrow and blindness threatens to strike when I look in the mirror, I'll save it for wearing at home.  I don't think Mario's ever going to look at me and say, "Honey, aren't your boobs a little big for that top?"

I did the neckband with vertical stripes just because.

And I have to admit I'm feeling almost smug - okay, not almost, just smug - about the stripe matching down the sides.  Stripe matching is a much bigger pain with knits.

Most of today has been things not working properly: I tried to vacuum, and the Dyson will not suck in the upright position.  So I vacuumed three rooms using the handheld attachment.  The Singer is making grumbly noises, and I realize it's been a while since she's had a proper tuneup.  And just to finish things off, I went downstairs to take laundry out of the dryer and the handle to the dryer door came off in my hand.  At least that stuck right back on.

Dyson and Singer may be dismantled on the carpet sometime soon.  Hopefully the right parts will go back into each machine.
Posted by Karen at 6:40 PM

Your sewing room looks fantastic! And that was a small expense to get all of that organization. Like the new top and if you add a cardigan it will cut down some of it's stripedness!

Finally my daughter had to take my Dyson apart a couple of weeks ago for the same reason. There was a bobby pin stuck in it that's why it wouldn't work - hopefully yours is something minor too!

Your room looks fabulous. I love the shelves and exposed fabric.

The new top is fabulous. I hope you get into the craft show too! g

How totally inspiring. Congratulations on your sewing room organization. I just discovered how great an Expedit cabinet is for storing fabrics, but mine doesn't look nearly as neat as yours. Those bins are perfect. What a great idea for storing the smaller stuff.

Your boatneck tee is cute. Love it.

I love your sewing room! Your dolls look great as well - very clever to have restored them yourself.

Things always seen to happen in threes, so hopefully that should be your bad luck out of the way for today.

Love your shelving units. It looks so cool to see the fabric in them!!! Jealous!

The top is pretty cute too. Love the contrast binding.

How about dark glasses on the doll without eyes? Congrats on the sewing room, and btw, I've read the Cold Antler Farm blog you recommended it. Like I needed another interwebs temptation!

You've been complaining about your room for awhile now. This now fabulous room wouldn't have happened without some good new storage. That expedit unit is perfect for storing fabric and keeping it neat.

Wow, your fabric organization is so inspiring! It's gorgeous.

I love the top. I think with the skinny stripes it should be ok with boobage? Not that I know anything about boobage.