Sewing in my head 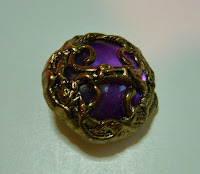 I had great ambitions last night to get a lot of work done, but it didn't happen.

I still felt like I got a lot accomplished, but unless the elves appear in the workroom while I'm sleeping, it's all just sewing in my head.

Two nights ago, I finished the purple and brown corduroy cuff.  I want to do one or two more in that fabric before I turn to something else, but I couldn't decide what buttons or trims I wanted to use for accents, so I put the idea aside for a moment and decided to clean off my desk.

For some reason - and I have no idea why - when I opened the top drawer to put away some assorted rubble, something purple winked up at me. 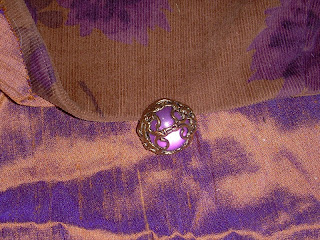 Purple?  I dove for it, and turned up this lovely purple and gold button which got all my creative juices going again.  Except that by the time I found it, it was nearly midnight and I had to put it down for the night.

Sewing after midnight is never a good idea.  If I'd started working on the piece already, doing embellishments or embroidery would be okay, but revving up the Singer after midnight?  No.

Been there, done that.  Picked out the stitches.