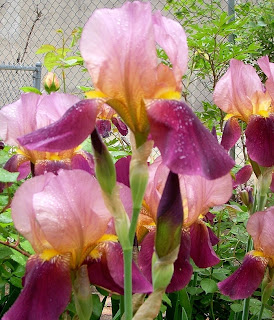 But a legitimate question, anyway:  what the hell season is it?

My vegetable seedlings have been in for a couple of weeks, the lilac has bloomed and gone, the blueberries are almost done flowering and the other night it was in the mid 30s.

Today it's humid and thundering and supposedly going to 80 degrees.

I'm not amused, and my tomatoes are just downright baffled.  They keep trying to start blooms and then it gets cold and they drop off. 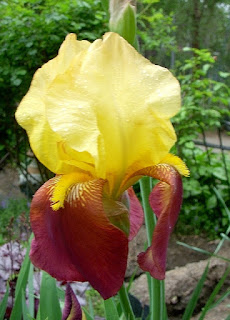 Not sure what we'll be eating this summer.

I leave you with a few of what the garden is producing right now - irises in abundance (how exactly do they spread that quickly?  I tore most of them out last year and I still have 4 clumps the size of armchairs) and the first yellow rose of the season.

There are pink and red roses blooming as well, but I've got a soft spot for yellow roses, always have.

And that second iris is one I've hunted for for years - when I was little, my great grandmom had a whole bed of those in her back yard.  She called them "flags," not iris, but it was the same thing.  My aunts never liked this one, said that flowers should be pink, not brown and yellow, but I always thought it was pretty.  It's taken me years to track down: I never saw anything similar in the garden catalogs, but finally I saw them blooming in a yard here in my neighborhood and the owner let me dig a few to bring home. 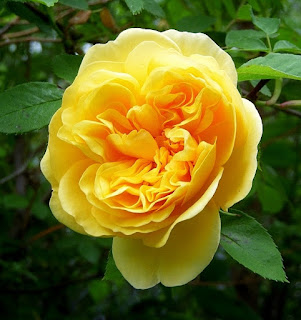 Now, being iris, I have about 30 of them.  Along with the purple shown above, some lavender, 3 varieties of pink and a few pale yellow that I brought from Mario's house.

I'm seriously thinking about digging out all the iris beds and just making one big one with a handful of each color.  It'll look like a blooming Crayola box each spring.

Now that would make me happy.  If only they would then smell like a blooming Crayola box.

Did anyone else love the scent of a brand new 64 crayon box when they were a kid?  Crayon contact high.  They don't smell the same anymore.  Or my  nose grew up.
Posted by Karen at 9:25 AM

My mother's garden was full of roses and iris (irises?) Your pictures brought me such sweet memories today. Thanks so much.

Yes, I have a bearded Siberian iris the same brown/yellow combo of yours. My neighbor tells me that they were originally a deep purple "sport" sold at nurseries. But, they eventually revert back to type. Either way, I like it.

Thanks for sharing the pretty flowers. We had several extremly cold spells in April and May (Colorado Area) It may be june before we get leaves and flowers.

My basil died of confusion. Weather here in southwest VA is as boggling as in PA.