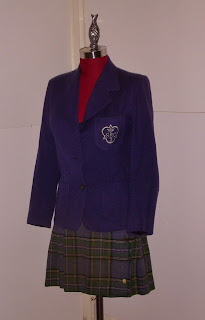 Since I've started making things from recycled fabrics, lots of people have been giving me their cast-off garments.  I've become a waystation between them and the thrift store; bags will appear on my porch and after I've sorted through them, I take the rest to the store (which is only down the block from me, and thus no hardship).

A neighborhood friend whose mother recently passed away asked if I'd be interested in some clothes when she and her sister cleaned out the house.  Of course I said yes, and she's given me some pieces which will be useful for future projects.

A week or two ago, she gave me some lovely woolen things (a sweater or two, a wool coat) and her sister's school uniform, which was still hanging in a closet at their mom's house.  (My friend and her sister are in their mid 50s, so that tells you how long it's been there). 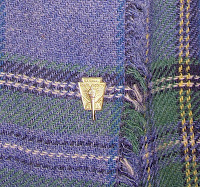 I had offered to make something for her from her donations, and she said it wasn't necessary.  When she handed over the uniform, however, she had a suggestion.  Her sister's first grandchild is due shortly, and she thought it would be nice if I could make something utilizing part of the uniform.

"What about a bear?" I suggested.  "Maybe using the plaid skirt for the body, so it looks like a vest, and the blue of the blazer for the arms, legs and head.  I could even put her honor society pin on the front." 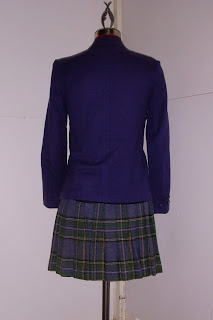 She loved the idea, and so do I.  Obviously the pin can't stay on if the bear is being given to a tiny person, but I get the feeling that this bear might spend some time on grandma's shelf before being handed over anyway.

I'm going to document this project so that my friend (and her sister) can see how an old school uniform gets turned into a family heirloom.
Posted by Karen at 6:59 PM