The Secret Lives of Dresses: a very late review 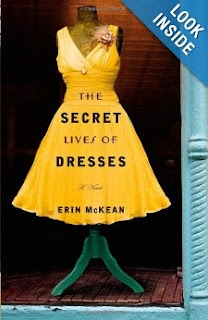 Let me preface this by saying that Erin McKean's Dress A Day was the first sewing blog I ever read. I especially enjoyed her Secret Lives series, where she would post a photo of a vintage dress, anything from an ordinary day dress to spectacular evening wear, and write a short story from the point of the dress.

She mentioned on the blog when she finished her book, the Secret Lives of Dresses, but somehow I didn't get a copy at the time. I meant to, and each time I stopped by her blog it reminded me, and then I’d get distracted again. And I really wanted to read it – I was curious how she was going to turn those wonderful, but obviously disconnected stories, into a novel.

The other day, I stumbled across a copy. Better late to the party than not at all, right?

The book is absolutely charming. Normally I wouldn't use that word; it’s like saying that something is “sweet” and you know they mean “cloying” or “sickly.” No, this was really charming. It’s the story of Dora Winston, a directionless girl about to graduate from college with no plan for her life. When she gets a call that the grandmother who raised her has had a stroke, she drops everything and returns to her hometown to be with her.

Grandma Mimi also ran a vintage clothing store, and since Dora can’t spend all her time at the hospital, she honors her grandmother in the best way she can – by keeping the business going. Dora grew up in the store, and loved to play dress-up, but her teenage rebellion led her into t-shirts and cargo pants, ignoring the lovely closet of vintage dresses her grandmother collected for her.

Since she came home with just the clothes on her back, she’s forced to dress from the closet and belatedly discovers the power of clothes, learning that a dress can lift her up, make people see her differently – and make her see herself differently.

There’s a bit of romance in the novel – both a purposeless “romance” at the college and a more meaningful friendship with a contractor working on her grandmother’s building – and some wonderful female characters. The book was filled with strong women – Mimi, who appears via many well-done flashbacks; Gabby, Mimi’s semi-related, hopeless romantic housemate; and Maux, an employee at the shop who functions as a near-sister. There are also some hideous relatives, who are stock characters in their purpose to the plot but so cringe-worthy that they deserve more credit, and two well-developed, very different men.

The secret lives appear early on: Dora has sold a dress in the shop and the buyer asks for its “secret life.” Dora never knew that her grandmother was writing little stories that were included with each dress, and it gives her one more question to ask her grandmother. Dora also wants to know about her parents, who died when she was a baby, and who her grandmother refused to discuss; in typical Dora fashion, she never pushed the issue and now worries that she will never know.

Mimi dies without regaining consciousness, and when her relatives try to take the shop, Dora has to quickly wake up and decide what she wants from her life.

There is one more secret life toward the end of the book that ties the plot up nicely, and answers some of Dora’s questions.

One of my favorite bits from the book came toward the end, when Dora goes to a graduate school interview: “Dora was wearing a charcoal-gray dress, narrow-skirted, with long sleeves ending in pointed cuffs and a matching sharply pointed collar. Dora was wearing the dress, although it had been a close call – when she first put it on, the dress had been wearing her. It had taken several minutes of walking around her apartment this morning before the dress could be forced into submission.”  We've all been there at one time or another.

A few Amazon reviewers called this book “fluff,” and worse, but I don’t agree. It’s not a heavy lift as far as books go, but it wasn't intended as one. What it is is well plotted, tightly written and with enough loose ends at the conclusion to remind you that life, unlike fiction, isn't always neat and tidy. But in the right dress, you can cope with all that.
Posted by Karen at 7:13 PM

I love this book. Thanks for the review and reminding me why it's on the shelf in my sewing room with my sewing and knitting books!

Oh I will have to get a copy. It sounds like a great summer read.

It sounds like a good book to read ~ thanks for the review - I'm going to get a copy.

The premise of the story is indeed charming. And it would have a certain appeal to people like me (and you) who have occasionally put parts of our lives on hold so older women can get theirs back on track. Lots of cliches there. I shall read it.

Great review! I've had this one sitting on my shelf (won it in a ModCloth giveaway), but haven't gotten to it yet. Sounds like a good read, though.

What a wonderful review. I'll definitely have to look it up.

Nice review--now I want to read it.

I love Erin's Secret Life stories, so I'll have to hunt up this book. Did you know she has a column in the weekend edition of the Wall Street Journal? I thought that was really cool when I first found it.