Who Plucked My Chicken? 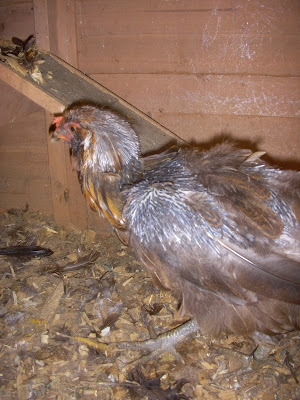 For those who have never seen a chicken during moult, this is the remains of Bonnie.  If you're squeamish, please avert your eyes from my nearly-naked bird.

She actually looks better in this photo than she has; she's getting her pinfeathers again - you can see the little quills sticking out all over.  Before she was just grayish chicken skin and a few gray and dusty feathers.

I figure she's got another 10 days before she looks like herself again.  And maybe I'll have eggs by Halloween.
Posted by Karen at 11:25 PM

hey nice post meh, You are one of the best writers I've seen of recent. I love your style of blogging here. this post reminds me of an equally interesting post that I read some time ago on Daniel Uyi's blog: Dating Women .
keep up the good work friend. I will be back to read more of your posts.