After a very noisy night (it was quiet at bedtime, but the people of Barcelona stay up late and party into the wee hours, at least on our block -- and it was not helped by the echo caused by all those tall, narrow buildings), we slept in until nearly lunchtime.  Or what we thought of as lunchtime, but when we got out on the street it didn't seem late at all.  I guess because those who were still out at 4 a.m. were just getting started themselves.

Saturday was a treat on several levels.  On our way up La Rambla (it seems almost every journey anywhere takes you up, down or across that street), we ran into a parade.  I'm not sure what it was about, but it was fun to watch.

After a quick breakfast, we stopped at three fabric stores recommended by a sewing friend who lives in the city.  I bought two pieces of fabric at one of the shops, which mostly specialized in remnants.  These were both deeply discounted because they were winter fabrics, but I won't get around to sewing them up until at least next year anyway, so I considered that a win/win.

Mario visited a huge comic book shop called Norma.  Not being of the comic book persuasion myself, all the shops look alike to me, but he browsed happily for the better part of an hour.  (I'm sure he can't tell the quality of one fabric store over another, but he always comes along for moral support -- and to act as my shopping sherpa, if I need one).

The comic book store was near the Arc de Triomf, which is at the head (or the foot?) of the Parc de la Ciutadella, so we had a wander through there, and wore ourselves out a bit.  We decided it it was time for an early lunch.  At a small place near the Arc de Triomf (which, by the way is totally different from Paris', being smaller, made of brick and altogether warmer), we had Spanish beer and seafood paella, our first of the trip.  I can live without langoustines (or crawfish or crayfish or whatever you want to call them), but they're Mario's favorites.  I think they're too much work for too little meat, personally.  But it was delicious -- scallops and squid and tiny clams, and saffron threads everywhere.  The most gorgeous color.

Our main goal for the day was the Sagrada Familia, Gaudi's enormous, incomplete church.  (They expect it to be finished in 2026, the 100th anniversary of his death).

I'm not even sure what to say about Sagrada Familia.  Gaudi has silenced me, scrambled my brains so that when I try to articulate what I saw, all I get, even a few days later, are fragments of brilliant color, rays of light from the ceiling like the fingers of god, those marvelous tree-form buttresses.  Lots of photos, few words.

We were waiting in line for tickets, and there was a group of American girls in front of us.  One of them was complaining about the combination of sun and her hangover, while another one wanted to know what Sagrada Familia was.  The third told her it was a church, and then she asked what all the words were up on the front.

Silence from the group, as they all considered the mystery.  Finally one girl says, "I don't know what it means, but it must be important.  They said it three times."

"Why is that important?"

This would be the one time in the history of modern civilization where checking your phone might have saved you from looking dumb, ladies.

More walking, more food.  We ducked in for tapas when it started to rain, and I had another plate of my new favorite pimientos de padron (peppers cooked in olive oil with sea salt, dead simple and delicious).  When the rain stopped, we started walking again, and found that the storm had left us with a gift. 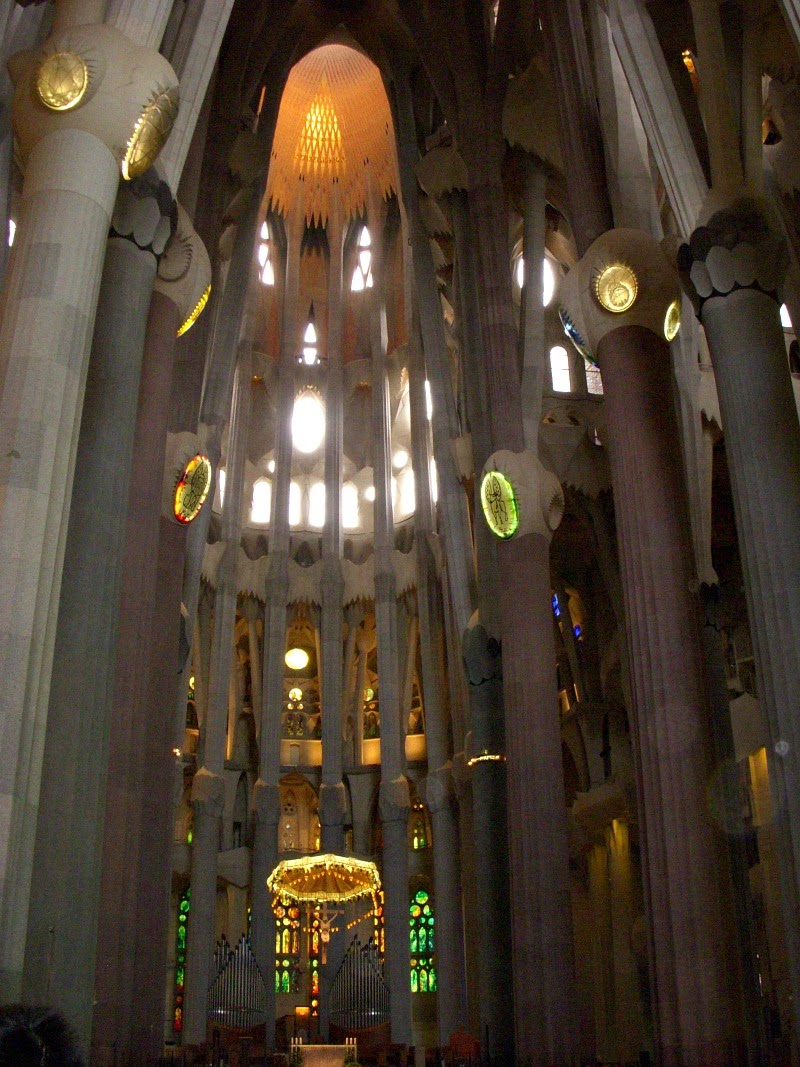 Back at base, naps were well earned.  I dreamed of stained glass and floating light.

We didn't get moving again until nearly 9, but that seemed okay.  Somehow, we were hungry again.  Is it the thought of such an abundance of food nearby that makes me constantly hungry?  I won't be able to try everything before I leave, but my stomach is willing to try.

Before we left, we had a glass of wine and the last of the strawberries.

It was good that we started late -- we knew it would be even louder than the night before, because the Barcelona/Madrid football (soccer) match was that night, and we could only assume that everyone would either be celebrating or drowning their sorrows, equally loudly, and equally late.  We decided to stay up late, out late and tire ourselves out to the point where we wouldn't hear it.  (Besides, in addition to the corkscrew, our thoughtful host also provided earplugs!)

We walked all the way up La Rambla and back again, unable to decide what we wanted.  We sat down in one restaurant, but when we got the menus, the prices were higher than advertised outside, so we left -- let them trap other tourists.  There's always got to be one restaurant like that, and you don't need to overpay for good food in this town.  It's everywhere.

In the end, we stopped at a place called Colom (Columbus) very near our apartment.  They were crowded, and the tables seemed to be speaking ten languages at once.  Everyone looked happy, and the food smelled amazing.  Also, there was no one out front trying to tempt us in.  I don't like being herded, even if the food will be amazing.  Let me look at the menu and make up my own mind.

More Spanish beer (Estrella Damm) for Mario, and my first sangria -- way better than anything I've had at home, less sweet but still fruity.  Tapas:  garlic olives, marinated anchovies (surprisingly good and nothing like those nasty salty pizza toppings), patatas bravas and some kind of spicy sausage.

The garlic breath would be monumental, but since we both ate it, neither of us cared.

I saw a little documentary on that church somewhat recently-- I'd never heard of it till then, but it sounds like it would be a memorable visit.

Are you going to show the fabric goodies sometime? :)