I'm embarrassed to admit that I did not take ONE PHOTO of any of the spectacular dishes we consumed over the last week.

I would place my order, think about it, even go so far as to put the camera on the table . . . and then remember, when the plate was bare again.  Oops.

To make up for it (or possibly because I couldn't consume this food), I took a lot of photos at the open air food market, one of my favorite places in the city, and a few shop windows.

The Boqueria, or the food market, is amazing.  And it was near our apartment, which meant we wandered through there several times during the course of our stay, each time finding new things to sample and bring back to the apartment. 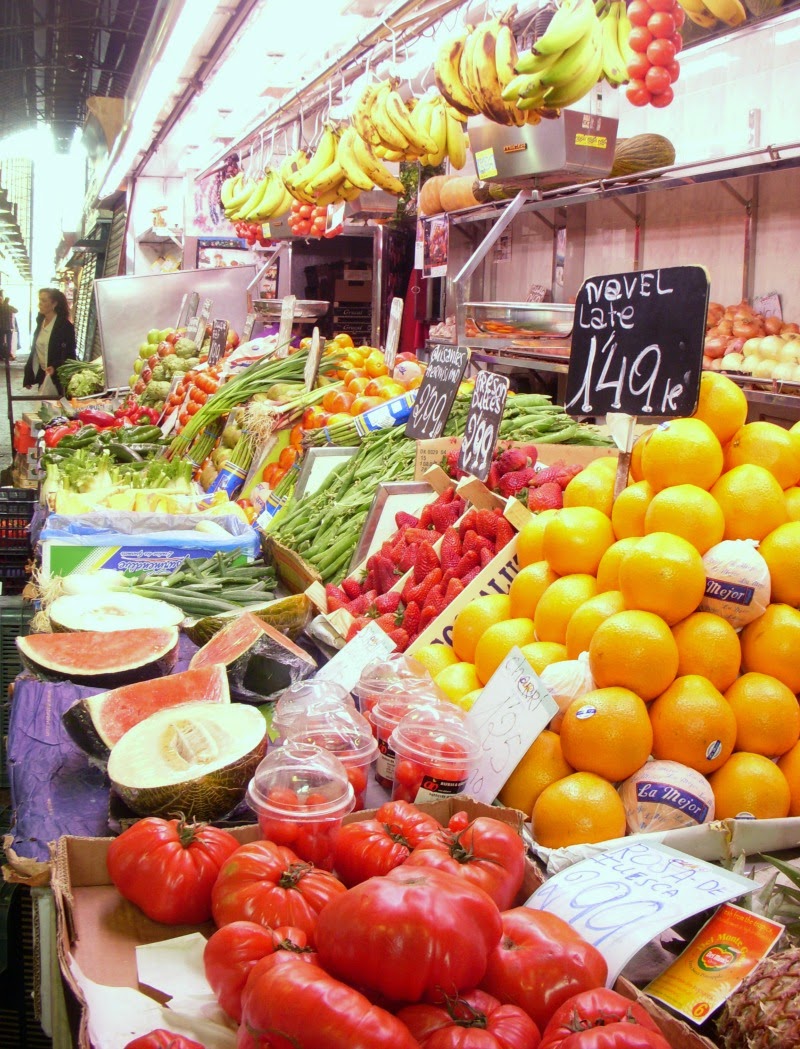 Stall after stall of meat, cheese, fruit, vegetables (look at the size of those tomatoes, my winter-deprived friends), all kinds of spices, peppers, seafood -- I love finding things that I've never even seen in person before, much less cooked, like those sea urchins -- and yes, oddities like that head-of-a-whatever there on the left by the pig feet.  Calf?  Sheep?


We discovered tapas the first day, and in a very big way.  That first night, we were exhausted but determined to stay up as long as possible to put ourselves on local time.  We'd eaten in the afternoon, but decided to take ourselves out to someplace not too far from the apartment for at least some wine and tapas. 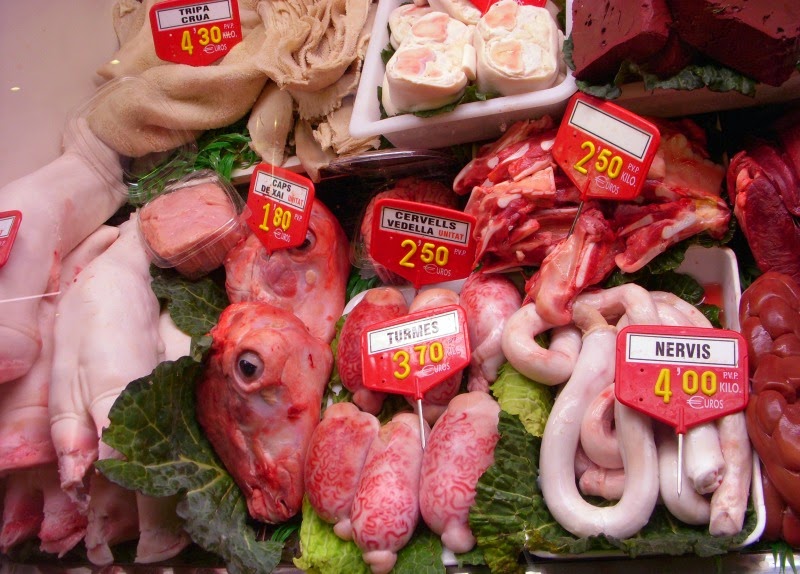 The evening meal was similar, but not.  The restaurant had an 8 tapas meal for 15 euro, and we got one portion and two glasses of wine. 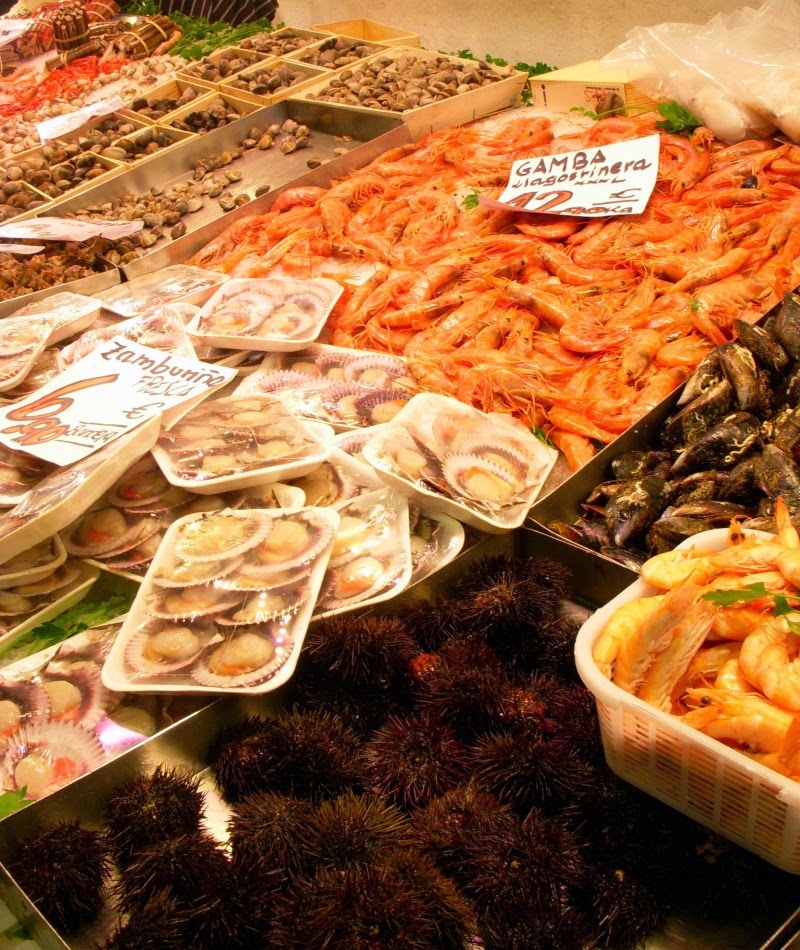 That got us a cheese sampler, some ham (Mario was in his glory -- he loves that stuff!), more patatas bravas, a seafood plate with clams, mussels, enormous shrimp and calamari, and something else that I've lost.  Delicious.  Again.

The next day, after a relatively insufficient breakfast -- I need more early morning fuel than most Europeans, it seems -- we went exploring, and at lunchtime we met our first paella.

Which I now need to learn how to make.  Again, a beautifully photo-worthy meal, and within moments, it seemed, nothing but a black, rice-crusted paella pan.  Maybe that's the best food review of all, that it was so good that it made me forget to take a picture. 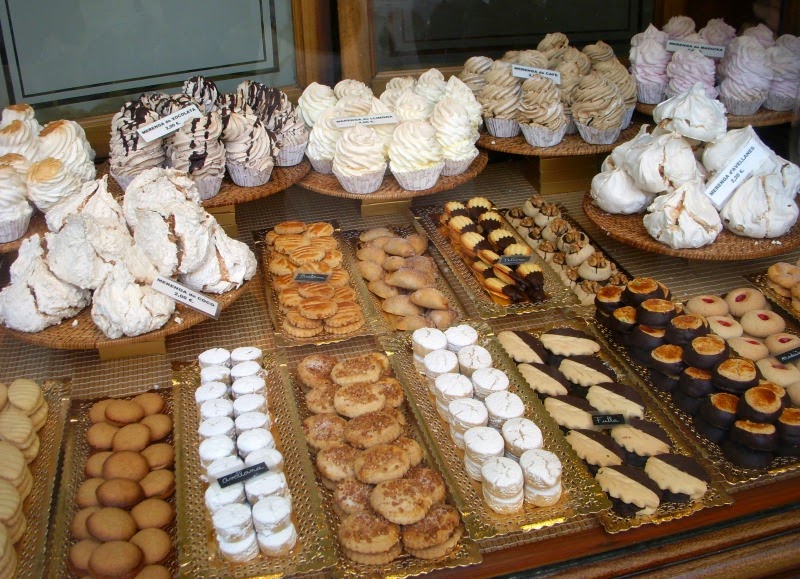 On Saturday, we found a lovely little restaurant near our apartment.  We'd already had dinner, but somehow, we were still hungry.  Also, we'd learned just how late the people of Barcelona stay up at night, and it was pretty loud under our windows the night before.  Since Saturday was a big Barcelona/Madrid football (soccer) game, we assumed sleep would be hard to come by, so we stopped after dinner and a walk for another drink and some more tapas (marinated anchovies, which are nothing like those nasty brown salty things we get on pizza), sausage and cheese. 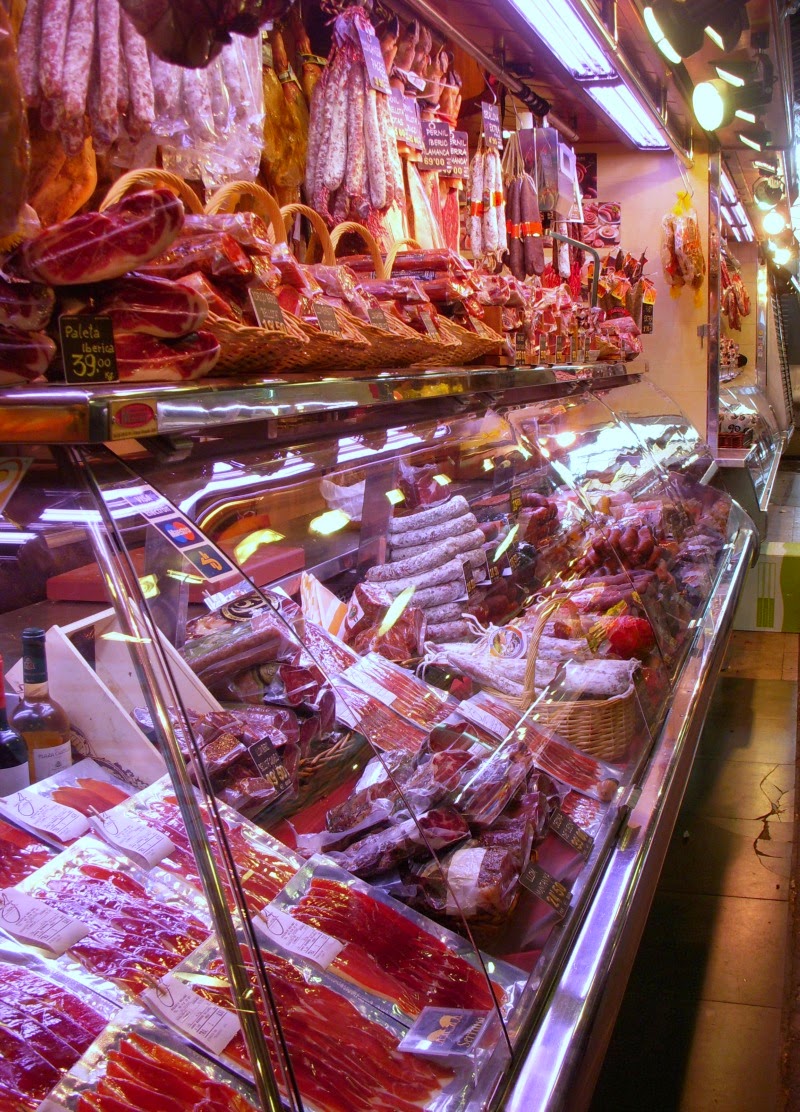 We talked to the waitress there,  who spoke very good English.  Turns out she wasn't Spanish at all, but Polish.  I asked how she had ended up in Barcelona, and she matter-of-factly said, "Football.  The Polish team, I root for them because they're my country, but they suck."  So instead of doing what women have done over the ages, follow a man to a new place, she followed an entire team of them!   She took very good care of us over our next few visits, and always wanted to know where we'd been and what we'd seen that day.

On our last meal there, we had the mixed paella, which we'd also sampled elsewhere during the visit.  This restaurant, though, instead of just adding beef or chicken, used rabbit, which I love.  It made for an entirely different dish, though I have to admit that I like the straight seafood paella best of all. 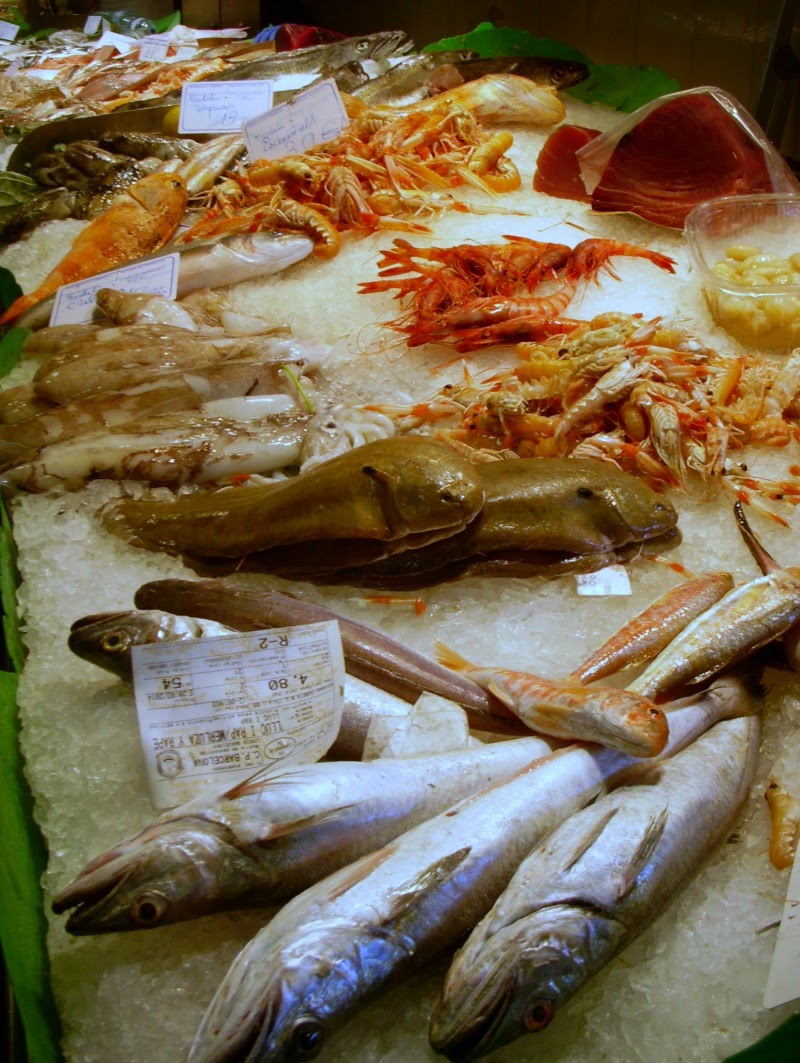 We've been to Paris, Florence and Bruges, and I have to admit, this is the first time I've come home heavier than when I left.  Considering all the walking we did, that's quite a testimony to the power of tapas. 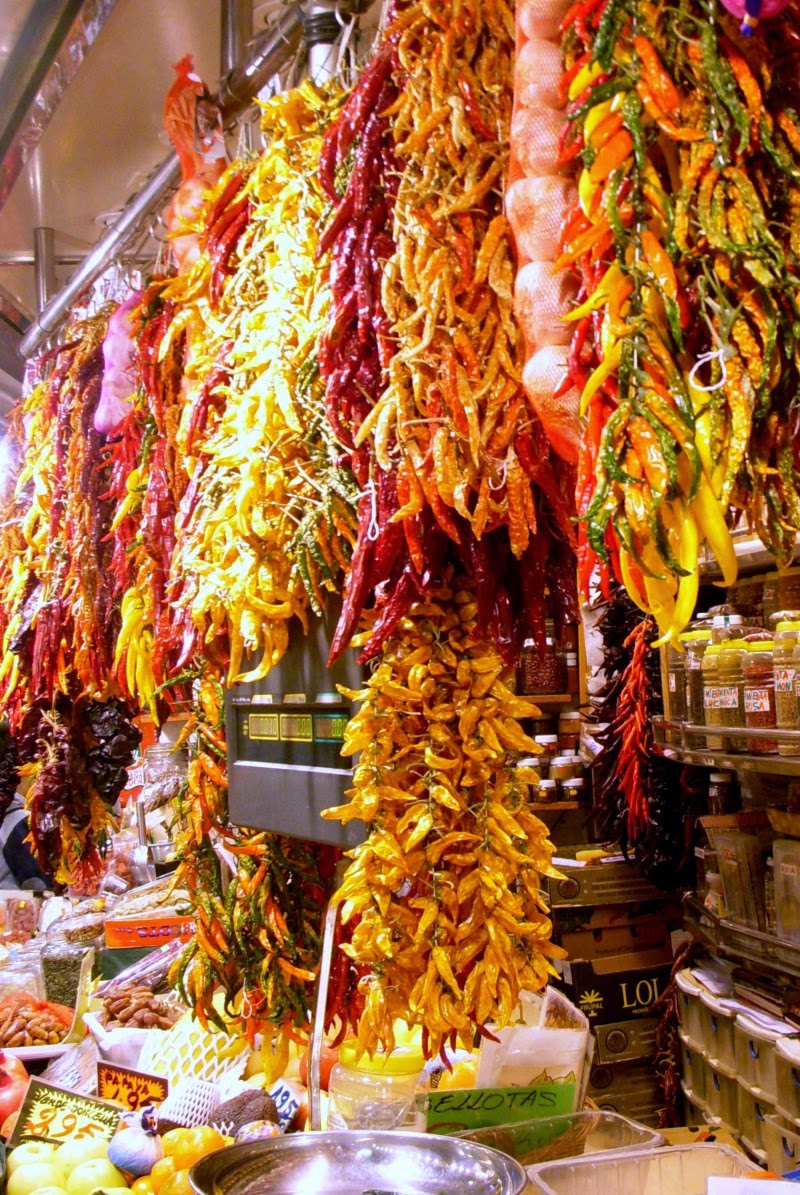 Now, you've done it. I have to head downstairs for dessert. Yum. I'd like the screen if I could have tast-o-vision.

Nothing like the food markets of Europe, is there? We"be been to Barcelona too--wonderful adventures, wonderful memories.

Sounds wonderful. Wish I could just jet off for a week to Europe! Much too far from Australia. But we can jet off to Asia but that doesn't sound anywhere near as nice as Europe.

It has been so fun to read about your vacay adventures. Love all the colorful pix of the food!