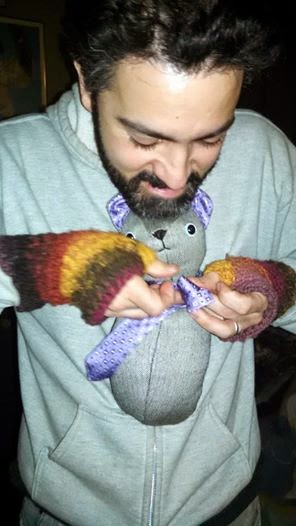 This set also comes with a story, which I will tell, but first I have to give credit where credit is due -- to Mario, who learned this weekend that he could tie a 16" necktie on a stuffed bear.  Thankfully said stuffed bear did not have its arms and legs in place when this occurred, because it would have just made it more difficult.

The woman who ordered these bears had a special request. Could I make a set of 2 bears in a week?  They're for her 2 daughters, and the clothing provided is from her grandfather, who is expected to pass away within the next few weeks.  The bears were his idea, and they picked out the clothes together, but then he surprised her by saying he wanted to be the one to give the bears to her girls.  She thought she'd just take the clothing and put it aside until after the holidays, but he had other ideas.

So she contacted me to see if we could play beat the clock together and make a special gift from her grandfather to her daughters. 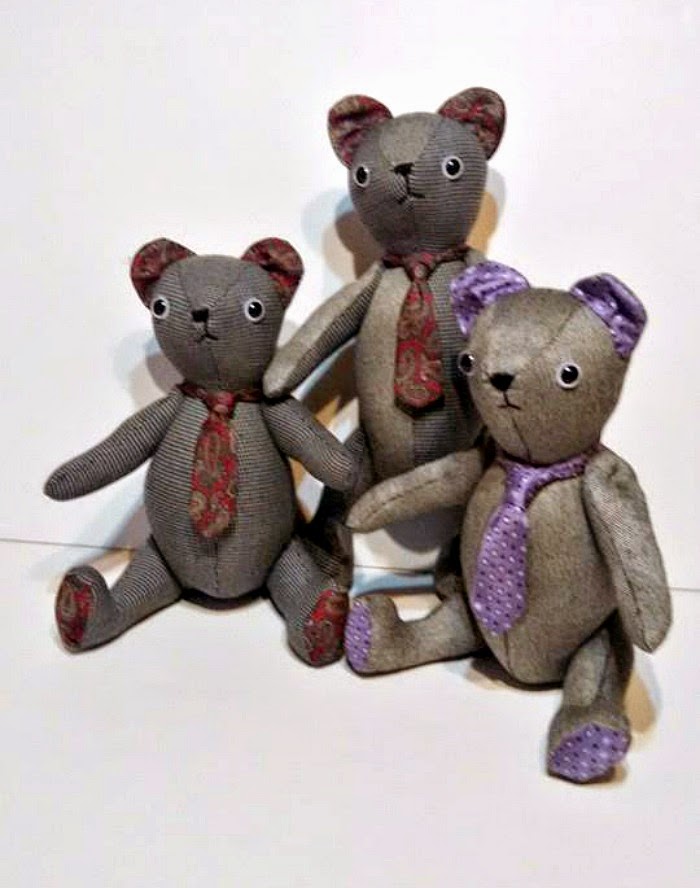 All I can say is that grandpa had some serious style.  I've gotten every kind of fabric imaginable for these bears, and they're all special because of what the garments mean to people, but this was one of the first times I really regretted cutting up a  piece of clothing.  The ivory-and-black herringbone jacket was silk/camel hair, and the black-and-gray houndstooth check was silk/wool.  Both are luscious to feel and the insides of the jackets, when exposed, made for a nice lesson in men's tailoring.

(Actually the guts of the jackets are up on a shelf in my workroom for me to study at leisure after the holidays, when I might actually have time to sew for me -- or Mario -- again).

Her other request for these bears, aside from speed, was that they have neckties.  Her grandfather is known for his tie collection and he handed over a lilac silk and a maroon paisley for this project, and in addition to the ears/foot pads, she asked if I could make tiny neckties for them.

Turns out I can.

This is definitely not something I'll do too often -- it was a little bit of a pain working with tie silk on such a small scale, and an adventure for Mario tying a tie that small -- but it really finished them off in a style appropriate to the donor of the garments.  (I know I could have made a faux tie, but I decided to try for the real thing -- and in case you wondered, a bear's necktie is 16" long).

P.S. I ended up getting a third order from her, a combined-fabric bear for her mom.  I kind of like that one (in the center) best of all.
Posted by Karen at 10:29 PM

Thanks for sharing the stories and bears.

Wow, they are fabulous. Great story.

What a blessing that you are doing for them. Great bears.

They are wonderful. I love these bears you make, and the stories that go with them

This story brought tears to my eyes. How wonderful that you were able to fulfill this request! These bears are sure to be cherished for a long, long time. They are absolutely stunning.

What a lovely story! I know they will treasure those bears.

They are all sweet stories but this one is the best!! And that is gorgeous fabric. Stylin' grandpa for sure.