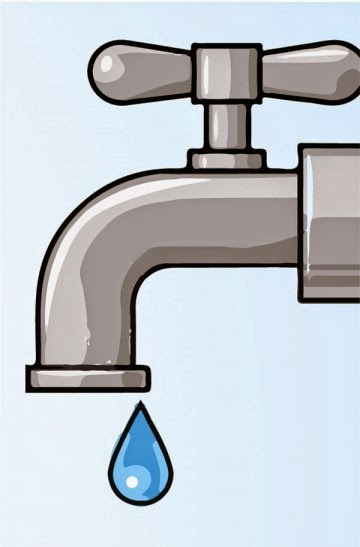 Anthropomorphize:  to attribute human form or personality to things not human.

It's been quiet on the blog since the holiday, and here's (mostly) why:  a few weeks ago, I ordered the house a Christmas present.  Which, apparently, it doesn't like.

I've owned this place for 15 years, and during that time, I've hated the bathtub faucets.  They're old, corroded, rusty/scratchy to touch and they weren't pretty when they were new.  Because they're old, they go through washers quickly and are constantly dripping.  The last time I had them fixed, the plumber told me that they weren't going to last much longer.

So I bought new faucets for Christmas.  Actually, I bought the whole inside-the-wall assembly to go with it (I don't know the plumbing term for it, but it's the thing behind the faucets that the hot and cold water lines attach to and then the faucets attach to on the outside).  I figured since the faucets themselves were from the 1960s, the stuff behind them was probably at least as old.  And it was.

Mario's uncle was a plumber, and he grew up helping him.  This was a project he said we could do, and we put the faucets aside until after the holiday, when he's off from work.

We took our last shower on Christmas morning.

Three days, five trips to the hardware store and one trip to two different Home Depots, and on Sunday, I called the plumber.  He called back Monday morning and Mario explained what we were trying to do, and where we'd stalled.  Plumber's first reaction was to say that we didn't buy very good faucets, and besides, they were probably defective and to go get a duplicate set so he could work from that when he came out.

He'd come out when we bought more faucets.  WTF?  I bought the faucets through Amazon, and they were $175 (American Standard, not total crap).  When Mario researched (which he loves to do, and it makes me a little insane), Home Depot sells the same set for $350, but they would have to be ordered.  Same thing for Lowes.  The plumbing supply that the plumber recommended for "good" supplies didn't have anything that would fit our setup and would have to order them.  He told the plumber this, and instead of saying that he would come out and look at it, and who knows, maybe fix it, he said to call him back when we had something for him to install.

Again, WTF??  One time before his men were in the house, installing a dual-flush toilet in the downstairs bathroom, and they kept joking that it wasn't even worth crapping in because it was Home Depot brand.  Dual flush toilets seem to come in the $99 HD variety and the $600 Kohler variety.  Guess what I can afford?

So I posted to our neighborhood listserv that I was looking for a plumber (other than that one) who wouldn't be judgmental because I couldn't afford top-of-the-line fixtures.  I got several recommendations, one of whom came out briefly this a.m. to look at things and will be back later on today (he was in the middle of a job but he at least wanted to get a look at it).

Best part:  plumber #1 called Mario this a.m.  One of his customers read my post, called him and instead of calling me (his usual contact), he called Mario to ask what my problem was.  Passive aggressive much?  So now Mario's embarrassed, we still don't have a functioning shower and I'm trying very hard not to pick up the phone and tell plumber #1 just what my problem is.

So I'm hating my house right now.  It's a vengeful pile of bricks  that always pays me back when I try to do something nice for it.  New window in the attic: roof leak.  Repair the porch floor: cracked pipe in the wall.  Repair the porch ceiling:  concrete steps cracked and broke.

Mario says I anthropomorphize the house more than the cats, and maybe I do.  But he doesn't hear it talking at night, telling me how much it hates what I've done for it.

As someone who has remodeled several houses, get a new plumber. There is no way he can properly assess the situation without seeing it. The brand of valves you bought is a good one. Would you accept this attitude from a sewing machine repair shop?

Absolutely not, Nancy. Waiting for the new plumber to come back and finish the job - at least he showed up in between jobs to scope it out and he doesn't see what's so unfixable about it. Thanks for the support!

You need a new plumber b/c you don't need this level of aggravation.

How old is the house and the plumbing?

Yay for the new plumber. Just let the old plumber go. I was thinking the old plumber's behavior was more chauvinistic than passive-aggressive. And no business owner nor his workers should be laughing at home owners for what they can afford.

I have no idea where Mario's house is...or if someone bought it...but what about going to his house to take a shower?

If I had it to do over I'd learn a trade; a good plumber, electrician etc... can make a great living. And everything on our boat has a name. We live aboard and everytime we talk about the Knotty Cat we praise her (criticisms are made while off the boat), but she still makes outrageous demands. For example: after acting up in our bay she got brand new bronze propellors for Christmas (I got a steamer basket for my pressure cooker)! She does love her bling. And btw I'm typing this while off the boat. I'm not that stupid! I hope you get this issue resolved soon, I know it's not fun.

Good luck with the repairs and upgrades. I have a hard time understanding how it is passive aggressive when you complain when someone tries to up-sell you to what they want instead of what you want.

Get a new plumber.

Also with older houses, I have found that ACE hardware has things that match or fit better because they are not the big box over priced items that are put in all the newer houses. IE, when you want to replace the stems in your faucets you can just buy the stems or what ever parts you want not the whole assembly. And if you only need one washer you can find it too and not have to buy a package of 15, which you will use only one of before the whole package gets lost.

Happy New Year, may your house accept the gifts you give it graciously and stop whining.