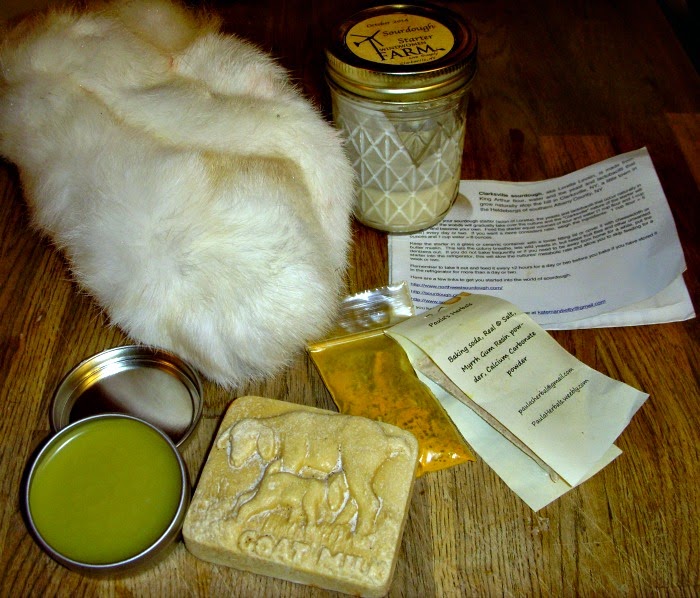 I mentioned a while back that Mario and I had done a weekend homesteading work shop at a friend's farm in upstate NY.

These are some of the goodies I brought home:  a bar of goat's milk soap (a recipe we made the last time I was there), a tin of herbal salve (made that afternoon under the maple tree in the front yard), a jar of sourdough starter, a baggie of spice mix and another of herbal toothpaste mix, two hanks of sheep's wool (not shown, but we learned how to wash, card and spin it into yarn), some dried red sumac berries (lost in a coat pocket somewhere, used as a cooking spice), and a rabbit skin.

Which is currently residing in my freezer.

There was a demo on how to turn a rabbit from, well, a bunny into something freezer-or-dinner-ready.  I was interested but not sure how I would handle it, but it was surprisingly bloodless and un-gross, and that white rabbit pelt was my gift for assisting with the processing of the second one.

(I give Mario points; he had no issues -- at least none that he mentioned -- about driving home with a fresh rabbit pelt in a plastic bag in the back seat, nor having it now hanging out in the freezer until I can get around to doing what needs to be done with it).

At some point, probably after the holidays are through, I'll thaw it out, rinse it in warm water and cure it according to the instructions I received that blustery October afternoon.

Fur-lined mittens, anyone?
Posted by Karen at 1:13 PM

Wouldn't fur lined mittens be wonderful for driving or walking in our blustery northeastern winters?