Fruits of my labor 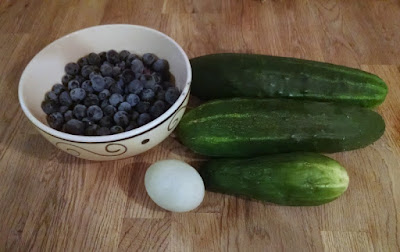 The garden is coming along, as gardens do in July, especially when there's been a lot of rain.

This was what I brought in on Saturday afternoon.  The cucumbers are a bit bigger than I generally like, but the pot they're growing in was hidden behind some very high weeds (I told you it was raining), and I hadn't seen them sooner.

The tomatoes are also coming along.  The Juliet tomatoes, which are my favorite variety to put in the dehydrator, are a very viny tomato, and they've clambered up into the rose bushes when I wasn't looking.  I was planning to prune those rose bushes, but then I'd  have to invest in lots of tomato supports, and it just doesn't seem worth it.  I'll let them grow. 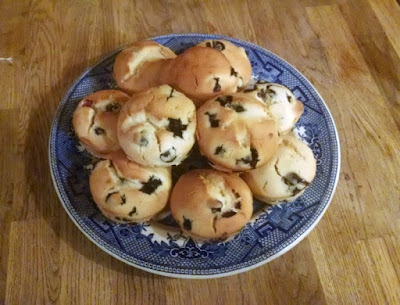 The blueberry bushes are slowing down a bit -- the bowl here is about 2 cups worth, and up until now I've been bringing in a full bowl every couple of days.  Since there weren't enough of them to have a proper evening snack, I made blueberry muffins and we had those instead.

There were enough left for breakfast, and for a snack this afternoon after we got done working over at Mario's house (up for sale, not selling, and in need of a bit of a sprucing up).  Patching drywall makes a woman hungry, especially in 90 degree weather.

Once we got in and had a muffin -- and wine, don't judge! -- I spent some time in the workroom.  This was supposed to be a very productive weekend, if you looked at the list I made up on Friday.  And yet I'd gotten to Sunday afternoon with most of it still un-crossed off.

I tried to fix that in a few hours and didn't do a half bad job.  I have an outdoor event next Saturday and I wanted to do another big batch of microwave bowls, plus I finished a few dresses I'd started earlier in the week and cut and pinned another batch of the mini teddy bears.

Tomorrow is Monday, and I'm back in the office.  It's not awful, but I'd rather be in my workroom.
Posted by Karen at 10:54 PM