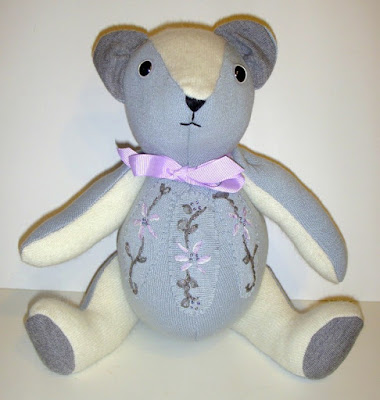 Custom bear season, that is.

Last year I did a set of 8 bears for a co-worker of a previous customer.  The bears were made from a denim shirt, t-shirt and plaid fleece lap blanket that had belonged to her dad.  At the time, she said she wished she'd kept something belonging to her mom, but everything had gone.

A few months ago, she contacted me and said that she'd found her mom's favorite sweater set put away (where she could find it, of course!) and would I make her 4 more bears?  Absolutely.

There were only 4 bears this time because (a) her mom wasn't a big woman, and (b) she'd passed away before any of the grandkids were born, so unlike the dad bears, which were distributed to three sisters and their children, the mom bears were only going to my customer and her sisters. 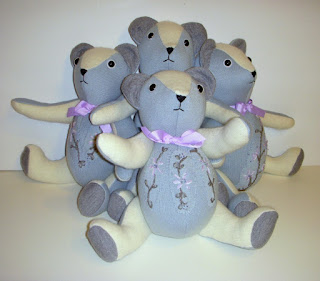 The source fabric was a Tommy Hilfiger light blue embroidered camisole and cardigan set, size medium.  The embroidery was on both sides of the cardigan, around one wrist and on the camisole.  Which was lovely, but really limited the amount of fabric I had to work with.  My customer was hoping that I could do all 4 bears in just the blue, but I called her almost immediately and told her it just wasn't going to happen - there wasn't enough sweater to go around.  We decided to mix in an ivory cashmere blend that I had on hand, and I used a pale gray sweater for the ears and foot pads, just to add a little more contrast. 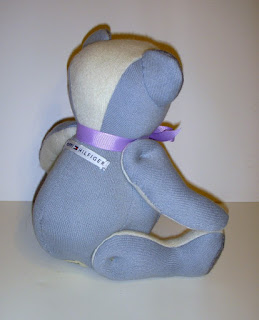 The bears - and the sweater - are really about the embroidery, which is done in ribbon in shades of ivory, pale gray and lilac.  I cut those sections off the sweater first and put them aside, and after the bears were otherwise finished I pinned embroidered sections onto each bear and hand stitched them on.  Because of the stretch in the sweater knit, and the placement of the embroidered pieces, each bear is different.

I like every custom bear I do, but I honestly think these may be my favorites right now - the colors and the embroidery just make them really special.

Like I said on FB, I think these are my favorite of all you've done. Just so special.

OMG, those bears are especially adorable!