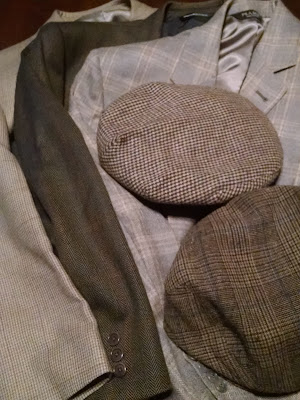 You may remember that last year I made a set of bears for two little girls from their grandfather's suit jackets and ties (he even picked them out specially before he passed away).

I was contacted recently by that same man's daughter.  It was her niece last year who had the bears done, and now this woman wants a set of 4 for her grandchildren, and she showed up recently with 3 more jackets, a bag of ties, a monogrammed shirt and 2 caps for me to play with.

He was a seriously well-dressed man, I'll say that.  It's such a privilege to work with nice menswear fabrics, even if I do feel like a criminal taking these garments apart.

On the other hand, it's like a tailoring lesson in reverse, pulling apart a jacket and looking at the stitching, chest pad, shoulder pads and all the other intricate things that go into making a piece look effortless. 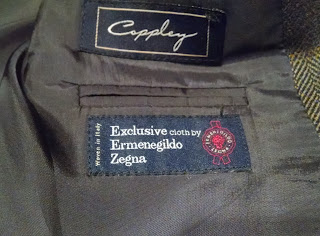 I know how much work is involved, but seeing it all torn apart on the dining room table is a little alarming.

So there are either going to be four or six bears out of this lot.  We started with a four bear order, but she said if there was enough fabric, we could take it to six. 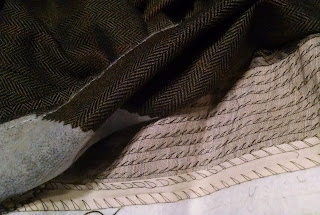 I don't have a photo handy of the ties she included in the package, but safe to say one of those is going back in its original condition.  I felt like enough of a criminal cutting up the jackets; there's no way I can cut up a Hermes tie and be able to sleep at night.

Some things are just too good to destroy, even in the name of teddy bears.
Posted by Karen at 4:04 PM

Definitely should make you feel great that the family liked the bears enough for another one to come back for more! (And I totally understand that you couldn't cut up the other tie...)