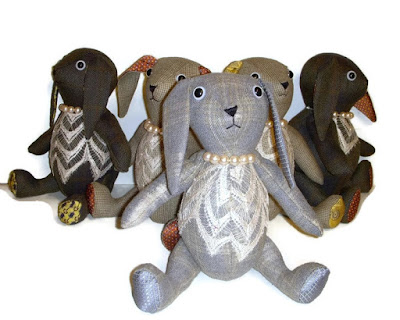 A while back, I mentioned that I was doing another set of grandpa bears.  Today, they got picked up, so I can finally share them.


My customer gave me 3 jackets, a handful of ties, a cashmere/silk scarf and a monogrammed shirt.

She requested a mixture of bunnies and bears.  It's the same pattern, other than making floppy bunny ears (which are lined in tie silk, not too noticeable in these photos).

I was also given a peachy lace dress with pearls that belonged to my customer's late mother.  That was a fun addition - I made a lace overlay on the fronts of all the bunnies, and then strung the pearls (which were used to weight the bodice of the dress) and made a choker for each bunny.

The boys were more straightforward - one from each suit jacket, with tie ears and feet that coordinated with their bunny girlfriends.  Instead of neckties, which I made for last year's grandpa bears, I used the silk/cashmere scarf and made three tiny mufflers which were knotted casually around their necks.  One lucky bear got the cuff monogram from the shirt. 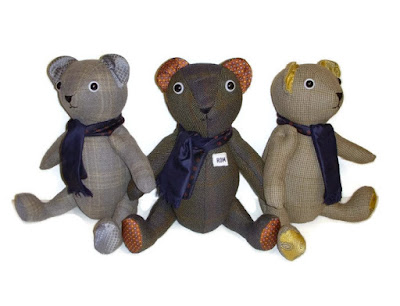 When she picked these up today, she brought along a large (almost 3 feet tall) Santa figure that she's had for years.  Her three sisters have similar Santas.  Her question was, after the holidays, would I be able to re-dress the Santas using new fabric and trim them up with her mother's fur coat?

Also, would I be able to use the remainder of the lace dress to make dresses for three American Girl dolls?

Also, could I think of anything interesting to do with all those leftover ties?

I love a customer who assumes, because I made one thing, that I can make anything she can dream up.

I love seeing how you create treasures for loved ones. I have no doubt you can create everything on her list! I look forward to seeing it.

These are really gorgeous. I too have no doubt at all you will do justice to her requests.

You have 'a good eye' as our antiques dealers say. Your bears and bunnies are inspired, can't wait to see the Santas, let the magic begin!