The owl thing has been popular for a while now.  For so long, in fact, that now I've finally given in and made some owls, it will probably end tomorrow.

Good thing there are buyers out there who are bound to be as behind the times as I am.

I made my first three owls back in December.  They were just an idea whose time had apparently come.  I worked out a paper pattern that I liked, its dimensions driven by the size and shape of the sweater scraps I had left on hand after a long season of mitten-making.

The contrast wings are my favorite, because I have even tinier scraps left over from projects long past that I just couldn't bear to throw out, and they're just the size for the wings.

The owl in the top photo with the reddish body and the green, brown and gold wings is a case in point.  His body was a recent sweater, but those wings came from the very first sweater I cut up to use for mittens -- in fact, the prototype pair that I'm still wearing three winters later.

I wasn't sure about those prototype owls, but I took them along to an outdoor Christmas market, and they sold.  Quickly.


So I knew I'd have to make more, I just didn't get around to it right away.  But they were on the list.

The list.  Ah, yes, the list.  There's a whiteboard in my front room where the inventory lives, with my goal for number of items I need prior to show season and my current stock number.  For a long time, the owl goal was 30, and the stock number was 0.

After the other week's little owl binge, we're now halfway there with 15 owls.

One improvement I made over the prototype owls -- they had eyes made from white sweater scraps, but it's very hard to cut sweater into precise circles.  I found some 3/4" white felt circles for a good price, and bought a big bag.  Also, the old owls had eyelashes, which I thought were okay, but this time around, I decided to give them eyelids.
I think the eyelids give them more attitude, especially when they go on a bit crooked.  A Facebook friend commented that she particularly liked the one giving her side-eye.

So these will be a new thing for spring shows,which are fast approaching.

I'm finding I missed it more than expected, though at least teaching has kept me interacting with people and not in my usual wintertime hermit crab shell, having to remember how to smile and be pleasant all over again, every April. 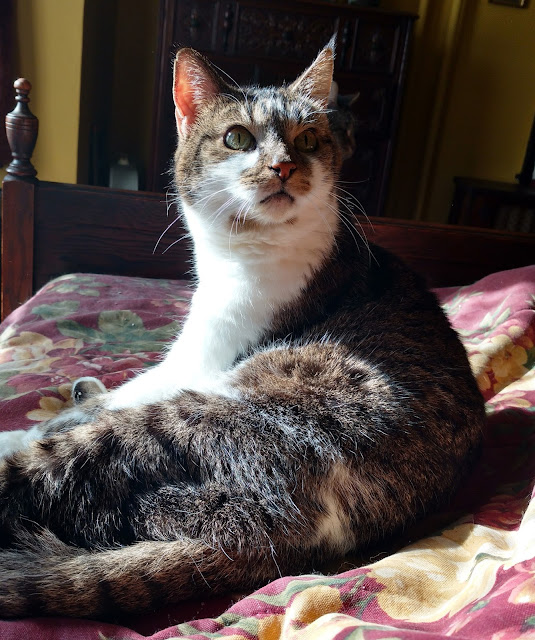 Just like people, some cats are just more photogenic.  Annie was sitting on the bed yesterday morning, hallucinating (she does that), and she looked so amazing in that puddle of sunlight that I had to reach over and grab my phone, even before I thought about coffee.

For those that wonder, Annie is doing well since her surgery.  Her hair has grown back and -- so far -- nothing else has grown back.  She gets manhandled and felt up on a regular basis, which offends her kitty dignity, but so far, so good.

There is some sewing going on, but yesterday was my last sewing class for the winter semester.  I have next week off and then the spring semester starts.  And I need to figure out what to do with the kids all over again.
Posted by Karen at 4:41 PM 1 comment:

I woke up before the alarm this morning. I didn't know why; usually if I wake up that early it's a car alarm or some other street noise, but the street was quiet. I rolled toward the open window and listened. Then I heard it again, and got out of bed. There they were. A straggling line of geese, barely visible against the sky.  Heading vaguely north, they honked more insistently than any car alarm.

I couldn't go back to sleep after that. The sound of geese is right up there with my other favorite noises:  train whistles (preferably at night), seagulls, and church bells. I know, it's a little clichéd, but there you have it.

I went downstairs, got the table out of the cellar and put it back on the porch. By the time Mario was up, the coffee was done and I was sitting on the porch with a mug. It's spring. The porch is back.

An extra gift: less than an hour later, another flock went over, this time a perfect V.
Posted by Karen at 7:45 PM 3 comments: 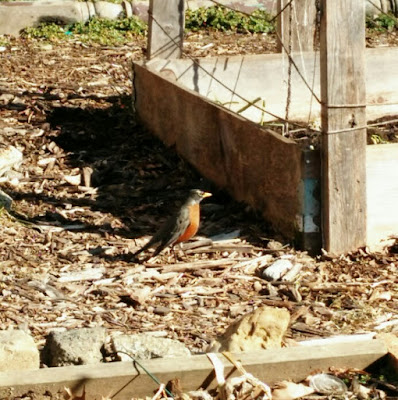 Rumor has it that spring is just around the corner.

So says this guy.

It snowed this morning, so what does he know?

February was a slower month than last January.  It always is.  It feels like the winter doldrums just sink into your bones and make productivity nearly impossible.

Add to that three days of temping in my friend's office (without adequate warning to have lots of handwork to take with me for lunchtime stitching) and I really dropped the ball.

On a more pleasant note, scheduling has started for spring craft shows, so that, much more than Mr. Robin here, lets me know that spring is, indeed, on the way.
Posted by Karen at 11:36 AM 1 comment: