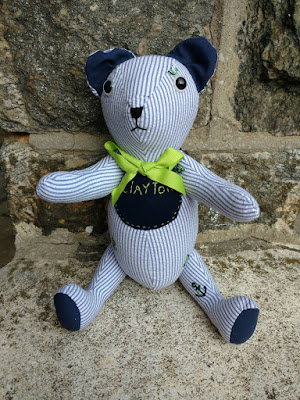 Summer is slow season for custom work, but lately, I think people are tired of the heat and beginning to think of the holidays.

Last week I got a custom bear order and two orders for custom stockings -- usually the stocking orders don't start until October, but I'm happy as this gives me plenty of time.

When I got the order for this bear, my customer said that her best friend's wedding colors were seersucker, navy and lime green.  This bear is made from a pair of shorts my customer's son wore at the wedding, and is intended for the (not-so-recent) bride's new baby boy.

The shorts were a boy's size 6, and just big enough to get all the pieces.  It actually came down to the stripes running horizontally across the backs of the ears, there weren't any scraps big enough to do them vertically.

I think he turned out cute, and though you can't see it in the photograph, he's got an anchor on each outward-facing bicep, like little tattoos.  He shipped off to Florida on Friday.
Posted by Karen at 3:36 PM 1 comment:

We had ourselves a day off today.  I've been feeling a little overwhelmed with the temp job - it's only till the end of September, at the latest, but last Friday and this Monday have been very vivid reminders of why I don't do this full time anymore.

It's nice to know I can still handle it, but why would I ever want to?

Flea markets should be gotten to early, but that didn't happen.  We slept in a little, then took ourselves across the street to the coffee shop on the excuse that it was faster than making and eating breakfast at home.  We drove up to New Hope, PA, which is about an hour away, very quaint and charming and artsy, and across the Delaware river into Lambertville, NJ, which is just as quaint and charming and artsy, but has a huge flea market right on the other side.


That was the destination, and it was worth the drive (as always).

We got there around 10:30 a.m. and wandered for a few hours.  I found some lovely vintage goodies that I can polish up and put in my vintage Etsy shop (most of it really does come from the endless supply of family stuff, but every once in a while there's a flea market find -- or 10 -- that I see and can't resist the opportunity to pass on).

After that, we went back into Lambertville and parked, had lunch at our favorite restaurant, which has outdoor seating near the canal and (no longer used) railroad tracks.  Normally Mario is bug bait and we have to sit indoors, but there's an herb garden right there, so all available insect life was paying attention to that and he was able to eat and drink in relative peace.  (I was still there, after all).

Even with lunching, then taking a walk along the canal and hitting up a few galleries on Bridge Street after, we managed to get back to Philly before it was truly rush hour.

I'm in that lovely state now where I'm tired, from walking and lots of sun and seeing loads and loads of lovely things, and I'm feeling like I should go into my workroom and start on a project, but I probably won't.

Back to reality tomorrow.  I can face it now. 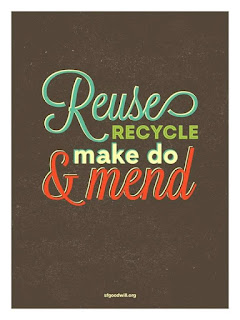 So Recycle Tuesday is something new for my Facebook business page, which if you don't follow, you should - not only do I post my show schedule and photos of new work, but I'll be featuring the work of other scary-amazing-creative recyclers each week.  Most fall under the "art" rather than "craft" category, but it all falls under the "keeping-it-out-of-the-waste-stream-and-making-something-new" category, which is my favorite thing.
Posted by Karen at 8:37 AM 2 comments:

That's what I feel like I've been doing lately, on just about every level.  When I looked at the blog yesterday and realized how long it's been since I've posted, I knew I needed to add this to the list.

This is also easier than making a half dozen dresses or 10 dolls in time for a weekend show, so here goes:

Shows:  Last weekend I had two shows, a farmer's market on Saturday and an annual craft show / vintage car show in South Philadelphia.  Both were really good days, to the point where I'm somewhat frantically trying to restock for this Sunday's Second Street Festival in Northern Liberties.  There are worse problems to have, I know.

Etsy:  The vintage shop has been doing well, selling slowly and steadily.  The handmade shop, not so much.  Partly because with vintage, people are looking for a thing they already know exists.  The hardest thing is trying to title and tag the thing to match the words they'll be searching for.  For handmade, it's more difficult -- do potential customers even know that the thing I make exists?  If they do, what do they call it?  Are they searching for it by color, material, type?  It's a process, and it's not the easiest one.  Add to that the fact that I have to keep pulling items because they've sold at shows, and it's hard to keep the inventory up (and the searches relevant).  My original plan this year was to make two separate inventories -- one for online and one for in-person sales.  That didn't last long, because in-person sales always sell more than I expect, and because I know I have that "backup" inventory I don't always replace as quickly as I should.  So there's that.

Work:  I'm temping 3-4 days per week.  I'm not enjoying it this time around, but I think it's only lasting until Labor Day this year, so I'm picking up that fourth day to stockpile a little cash for later.  I got hit with a severe escrow shortfall from the mortgage company (because my house taxes went up, but then I got a discount, but the City and the mortgage company can't agree that I got the discount until the mortgage company gets the refund, so even though I'll get some form of reimbursement later on down the line, I had an unscheduled $2,000 payment that really set me back).

Vacation:  Yes, you heard right.  It's the last thing my budget needs, but I'd already scheduled a week away from shows in October because we were going to go to my friend's farm in upstate NY.  Then I found a seriously good roundtrip airfare to London, and that blew that plan out of the water.  We'll be in London for a week in October, and I'm really looking forward to getting away, and spending time with Mario without television, too much screen and/or phone time, and new and interesting things to see and talk about.  Nice to get reacquainted; shame it takes visiting another continent to do it sometimes.

Writing:  Oh, right.  That.  So the book was with an agent for a year, and she shopped it around to 5-6 publishers without getting a result.  So it's back in my hands, and at some point (probably post-holiday when I have the time to write query letters and format samples and the uninterrupted time to sit at the computer and send them out), I'll look for another agent.  I think in a year's time there could have been more than those few attempts, but that's just my opinion.  Another agent's opinion may vary, and I'd like to find out.  If all else fails, I could look into self-publishing, but that's really a rabbit hole I don't want to fall into at the moment.

Garden:  Ack.  The weeds, some of them are bigger than me.  (And those don't include the weed tomato plants that have sprouted up everywhere, thanks to the birds who ate last year's tomatoes and then crapped in my yard).  The composters are full of weeds, because there's no chicken to feed them to anymore.  I can't say I actually miss Bonnie, though I do miss her fresh eggs.

Cats:  Still six, still badly behaved, eating for twelve, and walking on my head at night.  Katie and Annie fight like two kids trapped in the back seat of a car on a long vacation, and make me understand parenting in a whole new light.

Teaching:  No classes at the moment.  My after school class will pick back up in the fall.  I have a one-day embroidery class in late August in Old City Philadelphia.  This will be the third year of teaching at this kids' history camp, and I'm looking forward to it.

And there we are.  I think that brings us up to date.  I hope you're having a great summer, and I promise to be a bit more regular about checking in here in the future!
Posted by Karen at 10:26 AM 3 comments: