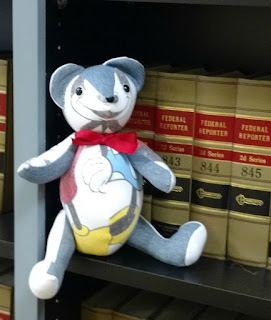 What an absolutely perfect use for such a difficult fabric and I know he will love this bear to pieces. Very touching, Karen.

Such sweet sentiment for that little boy!

I think the face is fun - not creepy - and that was my thought before I read your comment about it. It's amazing you were able to do such a great job in such a short amount of time. Such a touching story, and I like your ending comment.