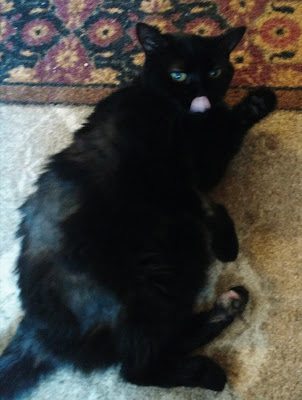 Bear's surgery is scheduled for Tuesday.

Her test results came back the other day -- her blood and urine were clear, and the fluid and tissue sample for the growth on her foot showed that it is a tumor.  Malignant, the vet said, but as malignancies go, not the worst kind.

He'll remove it Tuesday morning.  "It could come back," he said, "or it might not.  She's 11; you can hope that she'll die of old age before that happens."

This vet isn't everyone's cup of tea.  Most of the "cat" people in my neighborhood avoid him; I actually like him for the same reason they don't -- he doesn't blow sunshine, tells me what I need to hear (as opposed to what I'd like to hear) and his office is a 1970s-era dump, clean but worn.  So my hard-earned money isn't going into keeping up appearances.

I remember taking one of my cats to a cat specific vet in Philly years ago, and she spent 9 hours in the boarding area while they waited for her to decide to give them a urine sample.

This vet called me the other day, said that the lab had lost some samples and he needed another urine from Bear.  I brought her over, expecting to have to leave her for a while.  He popped her out of the carrier and onto the table, handed me a plastic cup, said, "Hold that, and raise her tail," and reached underneath and squeezed somehow, and she neatly filled up the cup.  He then put her back in the carrier while I moved the cup to the faded formica counter, and I took her home.  Total office time: 8 minutes.  Cost: $0.

He's pretty optimistic about Tuesday.  He said that potentially the most difficult part is the fact that the tumor is pushing her little toe out of alignment, and fixing that will probably cause her more discomfort than the actual removal.  I think that walking with her pinkie-toe permanently extended has probably already caused her more discomfort than the tumor, so it's a risk I'm willing to take.

Fingers, toes and paws crossed for a good result.
Posted by Karen at 8:44 PM

I'm with you - I prefer a vet like that. By chance is it Dr Littlejohn?

God luck to both of you!

I've been coming back every day to see if there was an update on your kitty (also to read the London posts). Glad to hear there's a good possibility she'll do well in all of this.

good luck to your kitty. meow.

You know, I think I like that vet too. I would certainly appreciate his "straight up" style. Hope from Alberta for success and a quick recovery.