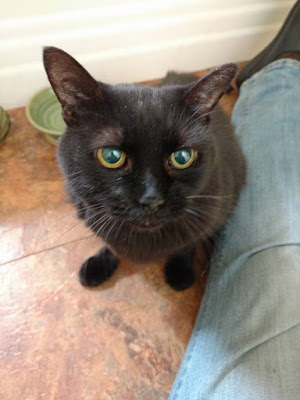 Because no vacation is apparently complete without a veterinary emergency upon return, I give you Bear.

The cat who hates me.  Who spent most of our vacation upstairs on the bed, according to our housemate who took care of them.  This isn't unusual -- Bear's not a social cat on her best days, and most of her days aren't her best days.

Friday morning, however, I got a look at her walking (okay, running away from me, as usual) and she was limping a bit and her foot didn't look right.  I called the vet, and he was out of the office for an emergency, and had several procedures booked for Saturday, so he wasn't able to see her.

I debated, but decided to take her down to the University of Penn's vet hospital, which is only a few blocks away.  It's expensive, but really good care -- or it usually is.  This Friday, they were very busy and when we got there at 2:00 p.m., I was told she probably wouldn't get seen until dinnertime.

Dinnertime turned into 10:00 p.m. before she was even sedated and examined.  We're not going to discuss my level of cat-mother anger; there's no point and I'm trying to get past it. 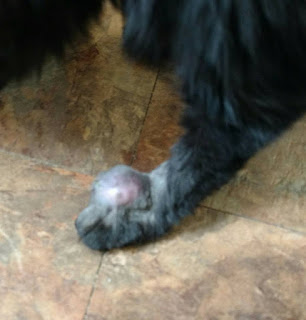 We picked her up after midnight.  They sedated her, shaved the foot so they could get a look at the thing on it, and while they were at it, clipped her nails and shaved all the mats out of her fur.  It's something, anyway.

The lump, which I thought might be an abscess because she had long nails (they clicked on the floor like a dog's) and I've had cats before whose nails have punctured their paw pads and gotten infected, is not.  It's a mass, solid tissue with a pocket of fluid in the center.  The doctor was pretty certain it was cancer, and started immediately talking about booking her for a surgical consult and doing more tests beyond the x-rays and fluid samples they had already taken.

Considering that the ten hours she'd spent there had already eaten every cent of the money I'd earned from my unexpected Etsy windfall (hey, it was nice while it lasted!) with nothing more than a manicure, haircut and vague diagnosios, I said no.  It's not that I don't want to help her, but Penn is the most expensive option in the area, and my regular vet did a great job with Annie's breast cancer surgery back in December.  I'll discuss it with him and see what we come up with.

Penn is supposed to send Bear's records over on Monday.  I'll talk to the vet and see what he says after reviewing them, whether he thinks it's something that can be removed while still giving her any quality of life, or not.  She's 11, and not generally a cat who tolerates a lot of handling.  My decisions in cases like this depend often on the cat's personality -- I'm not sure how she would cope with something as drastic as an amputation at that age, and with the level of care and handling that would go along with it.

On the other hand, either the anesthesia or her confinement in a small room (the bathroom attached to Mario's office) has completely changed her personality.  As you can see from the top photo, she was hanging out happily near my leg, and any touching of Bear in the last decade has been purely accidental, or because I've surprised her when she's asleep.  So there's that.

I'll know more on Monday or Tuesday, whether or not this is something that can be dealt with or if it's simply going to be a matter of keeping her comfortable until she no longer is.  At least if I have to let her go, she'll have had a period of time where she's allowed herself to be loved and petted and made much of.  She's enjoying the attention, and I'm enjoying giving it to her.

Sorry to hear about the cat. It is a very difficult decision especially when they are not used to be handled. I had a parrot like that. Got old and ill and was afraid of handling because of abuse before I got her. In the end after a few days of trying everything we made the awful decision of letting her go. I hope it turns out to be something easily fixed.

I am so sorry. Two of my three HATE going to the vet, to the point that we have much hissing and fighting for 10 to 14 days afterwards. I'm glad she's letting you pet her, at least for the moment.

Here's hoping it's nothing or if it is, that the decision is an easy one to make.

Oh isnt' that always the way. And of course then a wait over the weekend to worry. Yuck

Prayers for Bear and you!