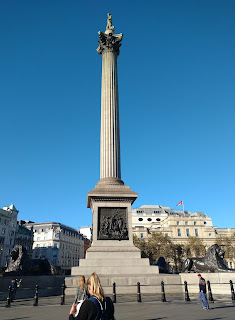 Sunday was a museum day.  After a full breakfast -- both in quantity and in name (a full English breakfast being eggs, sausage, bacon, beans, mushrooms, tomato and toast) -- we took ourselves toward the Tube.

Staying in Paddington, we're not at the center of everything, but we're right at three major Tube lines and the railway station.  Transportation is pretty quick no matter where you want to go.

Charing Cross lets you out at Trafalgar Square, bright sunlight, glittering fountains, humanity everywhere.  Musicians and other street performers clamored for attention -- and money -- and sidewalk artists busily chalked flags on the pavement in the hope that coins would be dropped on them by patriotic Australians, Americans, Germans, etc.

My favorite performer was outside the National Gallery, where we stood for a few minutes, waiting for them to open, watching a 10K race flow past.  He was an older black man, a dancer, yogi and contortionist of some skill, who managed at the end to fold himself neatly into a clear plastic box not much bigger than a cat carrier.  I'll never think of myself as flexible again, I thought, as I put a few coins in his hat.

The National Gallery had never been a favorite before; I'm not sure why.  This time, I could have sat all day in front of their six Van Goghs, and on a wall lined with John Constable's English countrysides, you could almost smell the air.

We've got a Sunflower at the Philly art museum.  I'm not sure if the one in London is better, or if I simply like the way it's hung -- on a gray wall in a room lit from above, it practically pulses with light and drew everyone in the room toward it, even people who were saying, "I don't really like Van Gogh . . . oh, look at this one."

A breather, a snack and on to the National Portrait Gallery, which has always been my place.  I've read so much English history over the years that my first visit there was like finally meeting people who I'd been hearing about all my life.

We spent some time in the earliest section -- my best old pals, the Tudors -- and I ended up butting into a tour guide's presentation.  She was talking about one specific painting, that of Robert, Earl of Leicester, but due to questions had gotten off into the weeds of Tudor relations and how Mary of Scotland had any claim to the throne, and where did poor Jane Grey come from anyway?

Apparently I read too much, but we ended up having a good discussion and I don't think I annoyed her too much.

It was surprising how much London has changed in the 20 years since I've been there.  I don't mean major landmarks like the Eye and all the glass monstrosities springing up everywhere, but even small things like the interiors of museums.  I had pretty specific memories of the Portrait Gallery, and things were not where I left them.

There's a whole new section at the end of portraits from the two war eras, and they're hung on clear walls in a very bright space.  I miss the more "traditional" museum approach, but I have to admit it worked really well for the more modern paintings.  (If Richard III had been hanging out on a glass wall, I might have gotten a little grumbly).

I've always had a soft spot for Richard III.  (Ever read Josephine Tey's Daughter of Time?  You should).

Once we were done with culture consumption, we wandered around for a while longer, in and out of shops and along random streets, just looking at buildings and speculating what it would be like to live there.

We ended up at Covent Garden just as a brief rain started, so we ducked into the covered market, which I remembered from years ago as having a nice mix of antiques and other goodies.  Not so much anymore -- it was all pricy tat, aimed at tourists, not an aged knicknack to be seen.  We waited out the rain and moved on toward the flat, to take a little down time before dinner.

Dinner that night was at a place recommended by a crafting friend who spends a lot of time in London.  She said that the roasted goat shoulder at The Smoking Goat was on her best 10 meals list.  We didn't end up getting the goat -- we were both too full from lunch -- but Mario had smoked lamb ribs and I had a fish dish with Asian seasoning that was one of my vacation highlights as well.

Love Constable, and particularly the painting you selected.

I was at the portrait gallery in September with a groups of kids from my school. They loved the Tudors and could identify all the symbolism in the portraits. It was great to see them interact with the paintings. There was a funny moment in the modern art gallery. When one student mistook Margaret Thatcher for the GBBO's Mary Berry..

Thanks for taking us along! Loved your tour, and the Van Goghs!

I have read Daughter of Time! I loved it! I have some Constable reproductions in my house, so it was nice to see the one you showed. Great art tour.