Thankfully, there are blankets out there in the world other than the traditional stripe.  (I'm not complaining, but variety is good).

Here's anoher recent commission: an owl made from a pink and gray-blue striped blanket.  I took the basic pattern that I use for my sweater owls, enlarged it and added more detail, including felt wings, feet and beak, and embroidering the baby's name and birth date on the back (along with a little pocket, which they can maybe use some day as a tooth fairy pocket; I don't know, I just felt like it needed a pocket). 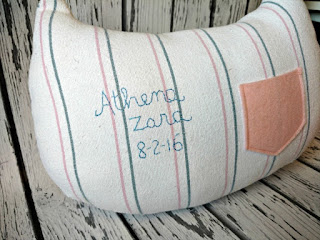 There are still 2 blankets in the works on my sewing table, including one printed all over with multi-colored elephants, and four more either in the mail or waiting to be shipped to me.  Looks like blanket-palooza won't be over until after the holidays.

It's been a rough couple of days.  I'm going to try to stay off social media for a while (though I'll still be here, just talking about sewing and cats), but I do want to say a few words about the election, and its aftermath.

My candidate did not win Tuesday night. (Actually, my candidate was out of the running a while ago, but you know what I mean).

I know people who voted for Trump and who are happy about the result of the election. I believe most of these people do not actually think that women, gays, Muslims, people of color and other minorities are less than they are.  I hope that is true, and I hope they also realize that others will use this election as an excuse to fear and hate those who are not like them.

One thing I heard on Tuesday night's endless coverage was that liberals took Donald Trump literally, but not seriously, and his supporters took him seriously, but not literally. So maybe he won't build a wall, ban Muslims or do any of the other things I fear on behalf of people I care about.

Living where I do, near the University of Pennsylvania, in a neighborhood which is so multi-colored, multi-ethnic and multi-cultural it's difficult to visually decide who is a minority, with three mosques within walking distance of my house, I know a lot of people who could be affected by the negative rhetoric which was thrown around during the campaign.  Even if Trump walks back his remarks, or changes his tone, the genie of racism and misogyny and xenophobia has been let out of the bottle, and equal numbers of people are trying to stuff it back in while the rest are trying to break the bottle.

It's up to us. Obviously, voting isn't enough. If you care about something don't just tweet or post on Facebook or hash tag. Do something about the causes that matter to you. Because then even if the other candidate wins, you know that you are doing your best to be the change you want to see in the world. And sometimes that's the best you can hope for.

Also, if you know someone from the other side of the fence (and are still talking to them post-election), try to find at least one issue on which you share common ground.  We wouldn't have ended up quite so divided if we still talked to each other, instead of letting politicians and cable news tell us what the other side thought, and scaring us all senseless in the process.

I voted for Hillary on Tuesday, but I really wanted President Bernie Sanders.  I admit that I fear what could come from a Trump administration.  But there are still good, kind, rational people out there, willing to make a difference, talk to their neighbors (and their difficult relatives).  Sometimes a conversation can spur change.  Sometimes a person just needs to know someone to get another perspective on an issue they thought they completely understood.  It may not change their mind, but then again, it might.

I have a cousin that I love.  He voted for Donald Trump.  He is a good, kind man, who loves women and animals and America.  He's intelligent, he's college-educated.  He is pro-gun, but he grew up in a rural area, where they're a fact of life, not a criminal weapon (at least for the most part).  He chose to move to Philadelphia, so he can't have many issues with people not like himself.

We're having dinner soon.  I look forward to finding all the things we do have in common, and maybe even finding an issue we can work on together.  It's the only way.
Posted by Karen at 12:23 PM 16 comments: 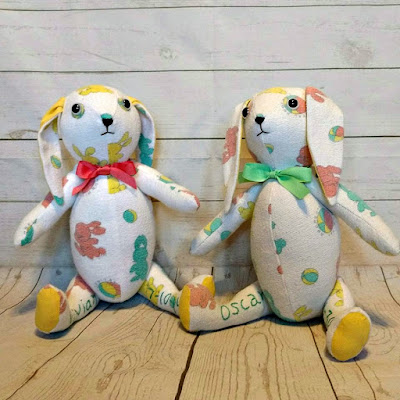 The receiving blanket animal orders are slowing down.

I'm not complaining about being busy, trust me, but I have to admit that sewing one after another of the traditional striped receiving blanket got a little bit . . . wearing.

Then these arrived.  Two different customers, two different locations (one CA, one FL), but the same unusual blanket.  It's not flannel, it's fuzzier, and it's printed all over with multi-colored bunnies and beach balls.

Interestingly, and I didn't notice this until after I'd cut the bunnies and constructed them, with the beach balls under the eyes so they looked spotted, it says "Hospital Property" in little letters around the circles.

I'd have taken my blanket, too, if it had been this cute.
Posted by Karen at 9:56 AM No comments: 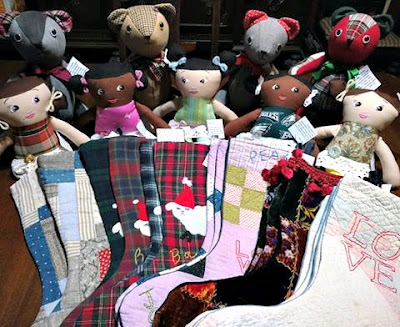 It's that time of year again.  The time when, despite all the work I've done during the year, I realize that the holidays are coming and I somehow have almost NO stock available for holiday shows.

I have shows on November 12, November 18-19, December 4, December 11 and December 18, plus a two-week-long in-house show in December at the Arts League where I teach, and I probably have enough things for this weekend and some leftover bits.

This is not a good situation.

The photo here is a load of stockings, dolls and bears dropped off at a local store.  They were the bulk of my stocking sales last year, so they got my entire stock, and I will (hopefully) get more done by the weekend.

I'm almost finished with my receiving blanket custom orders -- there are still two blankets left to ship to me, and other orders will come in, but the large quantity of orders brought on by the Babble and Scary Mommy features is slowing down.
Posted by Karen at 9:11 AM No comments:

RIP Bear. And then there were five

Bear's surgery was scheduled for yesterday.  The orders were the usual: no food after midnight, no water after 6:00 a.m., so the night before, she got a big can of wet cat food.  She scarfed that down and then went to sleep on the arm of the big chair by the window.

In the morning, I put her in the carrier and walked her to the vet (I do love that this new vet is only 3 blocks from my house) and dropped her off.  The vet called about 15 minutes later.  He said that the swelling on her foot had doubled in size since he had seen her last week.  I told him it seemed to have mostly happened over the weekend, but that Monday was the first day she had seemed to notice it -- she was walking okay, but every so often she would stop and shake her foot, like she had stepped in something and was trying to shake it loose.

The rapid growth of the tumor made him doubt the lab reports.  He said if he did the surgery, he would most likely have to remove two toes, because the tumor had grown in between and around them.  It had also grown down and was swelling between her paw pads.  I asked if this would complicate the surgery, and he said even if he removed both toes, because of the rapid growth and the way it had spread in her paw, there was almost no likelihood of removing the tumor and getting wide enough margins to guarantee it wouldn't grow back.  And an aggressive cancer would probably grow back very quickly.  He also said with removing the toes and clearing away all the bad tissue, there wouldn't be enough skin to close the wound, and this would complicate recovery, make it longer, more painful and at serious risk of infection.

"Okay," I said.  "Give me your honest opinion -- knowing I might not take it.  Attempt the surgery, put her down now or bring her home and give her however much time she has until she gets uncomfortable?"

He sighed.  "She's uncomfortable now.  Doing the surgery is only going to make it worse, and you'll have the same result, plus you'll have spent money you probably don't have to do it."

I told you this guy doesn't blow sunshine.

It wasn't even really a decision.  And it wasn't about the money -- I'd already spent more at Penn getting the initial round of tests than this vet had charged and was going to charge for the surgery.  But why put her through the surgery and recovery and pain, only to have it grow back before she was even totally healed?
I ent back to the vet's office and we did the right thing.  He was very good, gave her a tranquilizer shot and then she laid on my chest with her head under my chin until she fell asleep.  After that, he did the second shot, which took effect almost immediately.  I stayed with her for a little while, and then walked home with the empty carrier.