Now We are Six 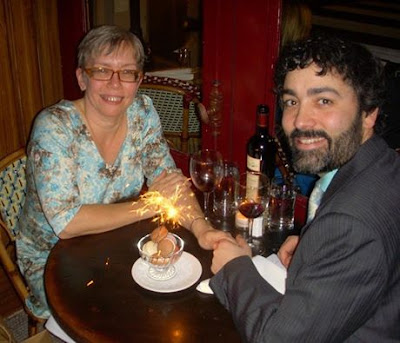 This photo is from our second anniversary dinner (four years ago), shortly before I broke the news to Mario that I wanted to quit my job in April and try doing my own thing.

I was wearing my wedding dress (which I am not certain still fits, and I'm not trying it on tomorrow to risk hurting my feelings; besides, it's cold).  Mario was wearing the aqua shirt that I made for the wedding, as well.

He was looking particularly curly that night, which means as part of my anniversary gift, he let me scrunch his hair up and resisted combing / brushing / pulling his hands through it and straightening the curl.  At least until after the waiter took the picture.

I can see the love in those eyes/those smiles. Congratulations and best wishes for many many more decades of happiness!

This is such a great picture! You can really see in both your faces the love you have for each other. 2 years? Ha! I'm celebrating my 30th anniversary later this year. And I feel like things are finally smooth sailing. Now to keep it that way for the next 30. ; )
Love reading your posts about your hand-sewn teddy bears. Have a great 2017!

The two of you see so well suited. Mario obviously has a great deal of love and respect for you. Wearing the dress and the aqua shirt is a cute touch. Congratulation.

I have a dress from that same silk/cotton fabric! I can guarantee mine doesn't fit, as that was 24 pounds ago. Sigh. I love this picture! You both look so very happy and so in love! I enjoy reading about your hard work and your successes. I'm inspired that you work so hard to accomplish your dreams. Wishing you and Mario many more years together!

Wishing you many more years of happiness!

Congrats and may there be many more happily ever after wonderful years together!