The dolls have something to say 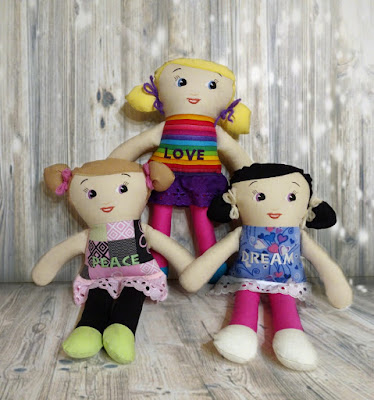 I started thinking about making these dolls around the election, and after the Women's March on January 21, when I saw just how many women (and men) had their children with them, I made a list of words that I wanted to embroider on my next lot of dolls.

That was as far as the project got, because of orders and various other things that got in the way.

But now I've finally gotten moving.  I'm back in my friend's office three days a week, and one of the first things I did there was sell three dolls -- two that said "Resist" and one that said "Persist."

The dolls pictured here are the ones left over from that initial sewing frenzy: 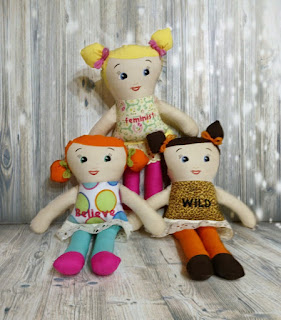 They are going into the Etsy shop today, with the note that they are also available in other skin / hair / eye color combinations.  I know this collection looks rather Caucasian, but that's only because I tend to batch sew, so that I don't have to change thread color.  There are medium and dark bits stacked on the sewing table, waiting their turn to be attached to the appropriate dresses.

Resist and Persist will be returning with the next batch of girls.

Can you think of any other words that would work?
Posted by Karen at 1:25 PM

I also like "nevertheless." Might be a bit obscure for a little girl but I bet the women in her life would know.

(Different Kay from above) Love these! How about, "Unite," "Together."

My favorite sign from 1/21 was held by a young woman in a wheelchair wearing a hijab. It said, "Laundry is the only thing that should be sorted by color." I wonder if it could be incorporated in some way in your collection. Maybe a swag to be hung on the wall, with garment shapes pinned to a line. Or not. :-) I just wanted to share the slogan.